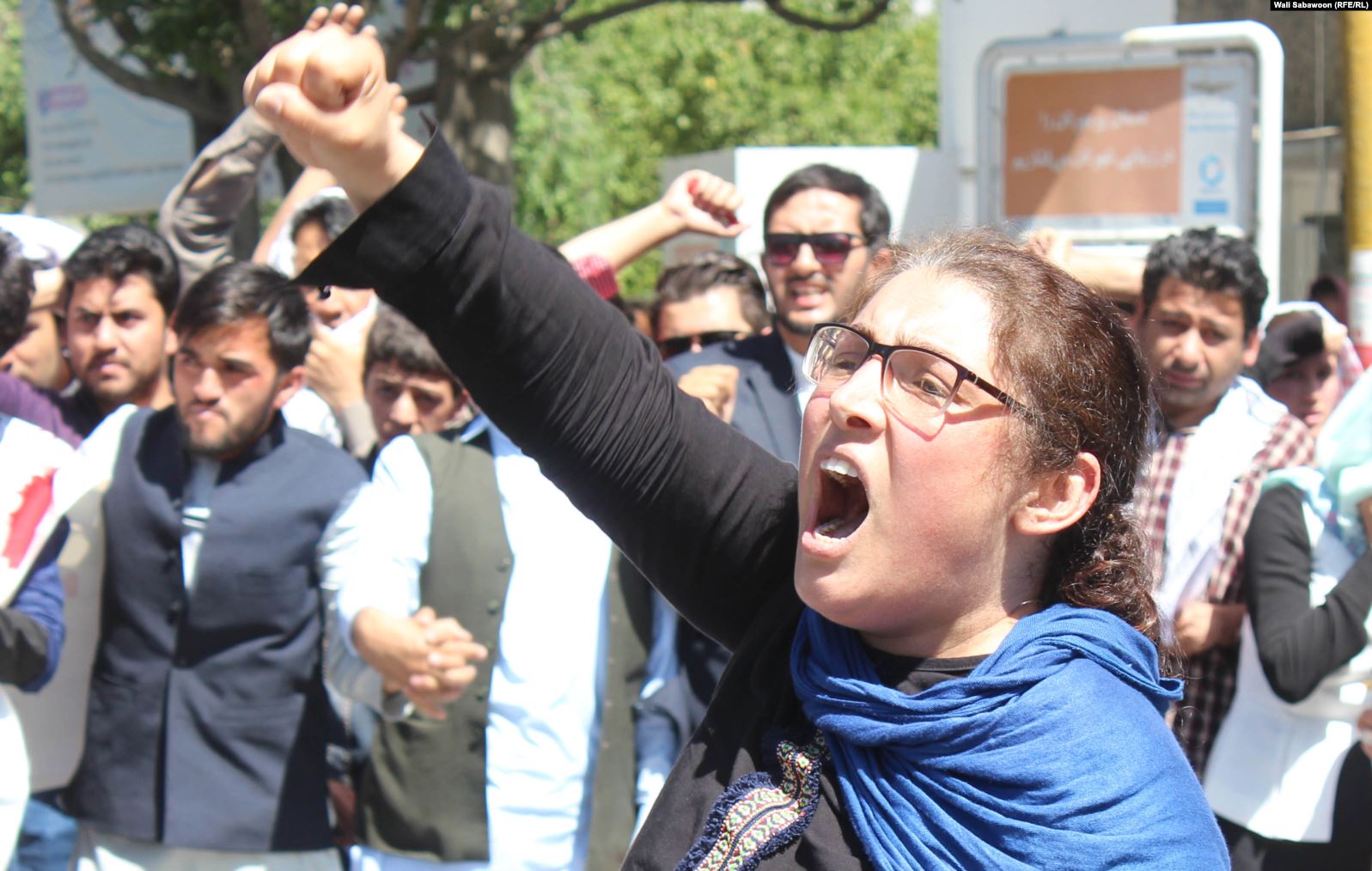 An anti-government protest in Kabul in 2017 (Credit: REF/RL)

The overthrow of the Taliban regime in 2001 ushered a new era of social and political activism into Afghanistan. Relative stability — at least in the initial years after the US-led military intervention — provided space and opportunity for increased political participation and encouraged educated and skilled persons (particularly women) to join the growing workforce, government and private organisations. This helped include youth in the change process too, thereby instilling in them a sense of ownership in the country’s post-conflict development.

By 2014, however, when most US and NATO troops had left the country, the promise of peace, development, and the free exchange of ideas receded. High unemployment, a deteriorating security situation, the political marginalisation of minorities, and exclusion of youth from power, have contributed to young people’s sense of uncertainty. Youth confront government unresponsiveness or ambivalence to this precarity (and in some cases have been the target of ill-advised government security responses) and incessant insurgent attacks that claim the lives of scores of civilians every month. In this milieu, discouraged Afghan youth turn to a suite of coping strategies. These include: emigrating out of Afghanistan; joining violent groups that offer them a sense of belonging and income, especially in rural Afghanistan; or demonstrating and protesting against government failures (to pressure the government into introducing legislative and policy reforms in the security and economic sectors and political institutions). The largest and most durable of these movements unfolded after 2014 — a critical year in Afghanistan’s political, economic, and security transition.

We found that on one hand, the deteriorating and unfavorable socio-political, economic, and security conditions fostered threats to the interests of social and political groups. On the other, these same ‘threats’ also generated incentives for collective action that sought to check or remedy this downward spiral. Mobilisation was energised by an increased awareness of citizens’ rights and shortcomings in government responsibilities and duties. Widespread perceptions of injustice, rapidly deteriorating economic and security conditions, unemployment, and perceptions of political marginalisation and exclusion from government and donor policymaking were key drivers of the protests. The main aim of the protest movements was, therefore, to press the government to provide public security and justice – both essential functions of the state (for details see our full report Youth Protest Movements in Afghanistan).

Between 2002 and 2016, Afghanistan witnessed tremendous growth across sectors, including investments in housing, telecommunications, and services. Agriculture, manufacturing, and industries contributed the most to GDP growth. But the 2014 transitions introduced precarity. Investments dried up owing to the deteriorating security situation (itself a by-product of foreign troop withdrawal), and by 2015 the economy was in free-fall.

The corresponding loss of access to reliable sources of employment was a leading driver of the protest movements. 400,000 young Afghans enter the job market annually, which puts immense pressure on the government to generate job opportunities. The slowdown in economic growth accompanying the 2014 transitions further weakened the job market. The rising unemployment rate and diminishing job opportunities fed resentment and increased the sense of uncertainty and precarity among youth.

Insecurity, attributable to the resurgence of the Taliban, was another leading factor driving youth protests. In fact, two of the three movements we studied were triggered by the inability of the government to provide security against threats of kidnapping and violent attacks by insurgent groups, particularly against minority communities. According to the United Nations Assistance Mission in Afghanistan (UNAMA) more than a hundred thousand people were killed between 2001 and 2017.

In addition, perceived injustice was a common driver across protest movements. As one interviewed university lecturer stated, “injustice has been institutionalised in Afghanistan.” Perceived injustice overlaps with other drivers, such as insecurity. Access to economic contracts and jobs was not perceived to be distributed on the basis of fair competition and merit, but rather contingent on patronage ties and ethnic favouritism. It’s whom you know that counts.

Afghanistan’s deeply patriarchal society (with its strong traditions of favouring older men of socio-political standing) makes it difficult for young Afghans, especially women, to participate in politics in a significant way. Despite the initial optimism following the fall of the Taliban and the subsequent liberalisation of the political space, the politics of the country tend to be dominated by elites who gained prominence during the struggle against the Soviets in 1980s and the civil war of the 1990s. Many of these elites transfer power/resources to their offspring and close off opportunity to wider groups of youth. This situation has reinforced the dynastic nature of Afghan politics and deprived young people of political opportunities.

The Afghan government has largely refrained from systematic repression of youth-led protest movements. It has offered to negotiate with the organisers of the movements and has sent its representatives to participate in public debates with the organisers on tele­vision networks. However, youth activists have accused the government of using negotiations as a mechanism to delay direct engagement with the policy demands of the protestors — hence, “soft repression.” The government is also accused of failure to provide security to protest events. On 23 July 2016, a twin suicide bombing targeted a rally of the Enlightenment Movement in Kabul, killing at least 85 protestors and injuring many more. However, the government has argued that protests have harmed public order and the economy through the closure of roads, businesses, and government institutions, and has introduced legislation that severely curtailed citizens’ right to demonstrate and assemble freely, in violation of the country’s constitution.

Youth protest movements in Afghanistan have raised a number of legitimate policy concerns in the area of security, politics and socio-economic development. If the government (and international community) fails to initiate constructive engagement processes with youth constituencies, protest movements are likely to emerge time and again and may even manifest violently. This will undoubtedly strain state-society relations and rob the government of much-needed legitimacy. Crucially, in the context of ongoing peace talks between the U.S. administration and Taliban, youth voices and interests continue to be ignored. Our research indicates that both international and national interlocutors continue to omit youth from this space. The continued marginalisation of youth does not bode well for inclusive peace and sustainable development.

Disclaimer: the original study, published here, was funded by the United States Institute of Peace (USIP).

Srinjoy Bose
Srinjoy Bose is a Lecturer at the University of New South Wales.