The Fiji Government last week released the 2014 budget. We will be featuring budget commentary on the Devpolicy Blog in the coming fortnight. In the meantime, here are some initial thoughts.

The 2014 budget solidifies the Bainimarama Government’s reputation as a big spending government. Bainimarama has delivered budget deficits year after year since taking power in late 2006, with the exception of a very small (and accidental) surplus in 2008, which has only been identified in the revised estimates. Granted, the poor economic climate in Fiji has been a contributing factor to these fiscal outcomes. Sluggish growth linked to political instability has kept revenues low and pushed the Fiji government to stimulate the economy through greater spending. I wrote in support of this approach with regards to the 2012 budget (although others were more critical). Times have changed, however. The economy is gradually improving, both increasing government revenue and reducing the need for fiscal stimulus. This requires a more cautious fiscal strategy on the part of the Fiji government, which we are yet to see.

On paper, the deficit of 1.9 percent of GDP doesn’t look bad, and is an improvement on the 2.6 percent figure recorded in 2013. What is different in 2014 is the $475.2 million in asset sales recorded in the budget. These include partial privatisation of the Fiji Electricity Authority, divestment of shares in Airports Fiji Limited & Fiji Ports Corporation Limited, sale of foreign mission properties and privatisation of the government printery. These one-off asset sales are what enable the government to record a lower deficit in 2014. If we exclude them from the analysis – and there is a strong argument that we should, given that they are ‘one-off’ revenue windfalls – the fiscal outcome is the worst on record for the Bainimarama Government (a very large 7.5 percent of GDP). The various calculations are shown in the figure below. 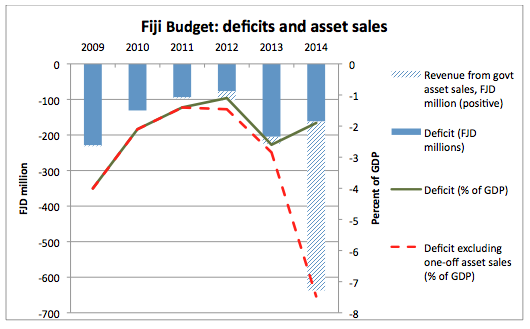 What of the spending priorities of government? Spending has increased across a range of areas, funding salary increases for civil servants (described as vote buying by one government critic), as well as investments in infrastructure and education. In general it is fair to say that this government has focused on capital rather than operational expenditure. ‘Investing activities’ will comprise 36 percent of government spending – an increase on last year’s figure of 32 percent, and a significant increase on that of earlier budgets. This is a positive development. Last year, the government chose to invest in the neglected roads sector, both through increased funding and reform of road maintenance arrangements. That focus continues in this budget. Road spending will increase to $454.8 million from $422 million in 2013 (itself a $180 million increase on 2012). The 2014 budget broadens the scope of capital expenditure, with more money committed to education in the form of grants to schools and loans for tertiary education. Again, these developments are welcome, although the ongoing lack of transparency regarding how such funds are spent remains an issue. The question of how this spending can be funded over the long run also remains unanswered.

What is most concerning is the lack of a serious discussion about how the government will consolidate its fiscal position (the one page dedicated to reform in the budget supplement [pdf] is hardly comforting). The assumption to date has been that economic growth will raise revenue, thereby funding the expanded level of spending to which government has become accustomed. This may occur in the longer term, but the fiscal troubles of the Fiji Government are more immediate. Better roads and an educated workforce will help Fiji’s economy grow in the long run, but they will not solve the government’s fiscal problems in 2015 or 2016. The issue deserves more attention given that government debt remains at almost 50 percent of GDP.

The Fiji Government has continued to shrug off such concerns in the 2014 budget. Bainimarama mentioned the deficit just once in his budget speech, under the heading “Responsible Economic Management”. The budget supplement states that government is “gradually consolidating finances over the medium term” (‘gradually’ being the operative word). It will be interesting to see the extent to which the newly elected government reduces spending in 2015. What is certain is that the government will not be able to plug the budget hole with another $475 million in asset sales.