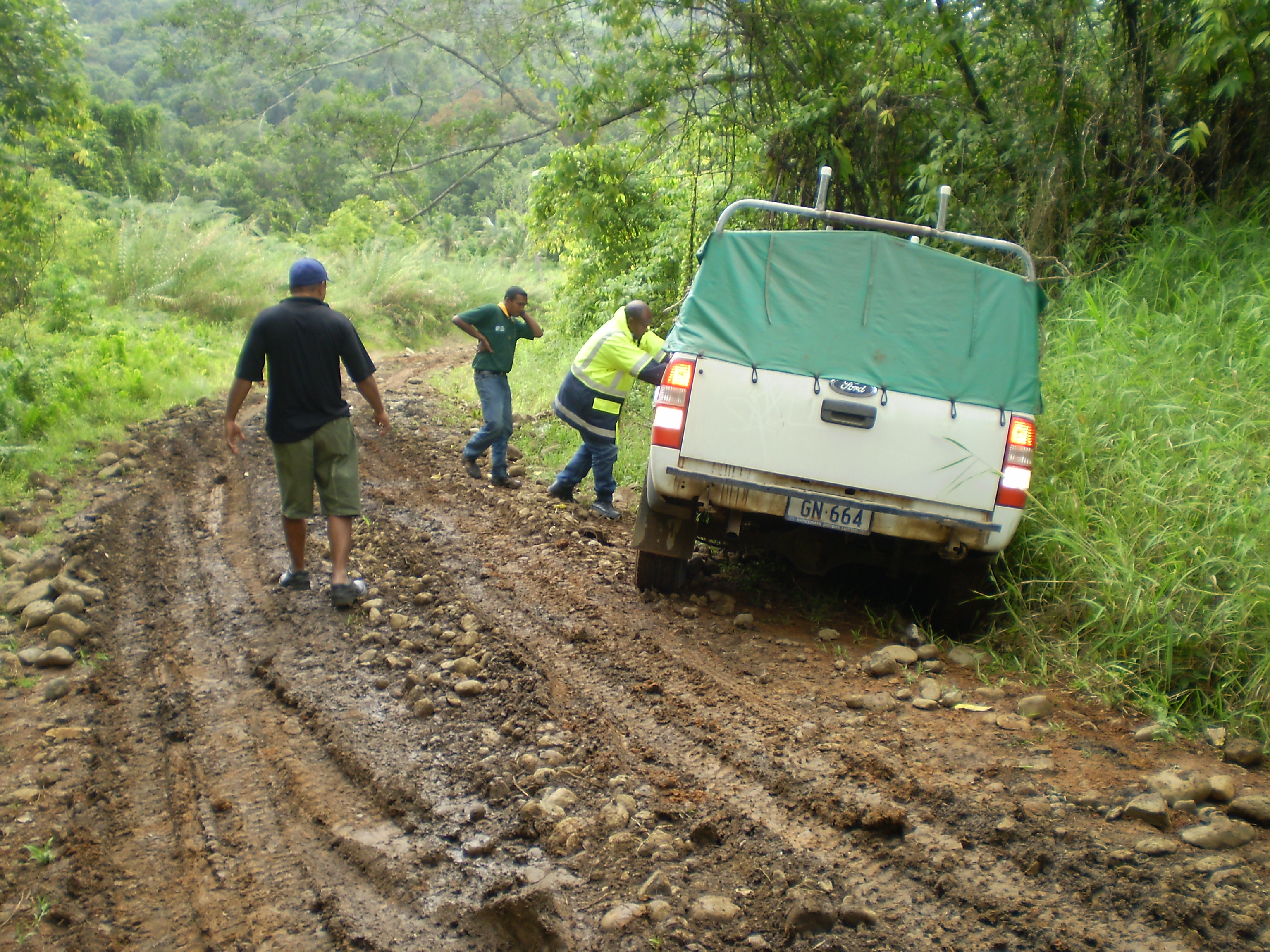 [Bainimarama’s budget speech is here. An online budget supplement was only released recently and can be found here.]

The defining feature of the 2013 budget is infrastructure spending. Capital expenditure in the budget increased 30 percent on the previous year to reach FJ$723 million (US$410 million). Considered in its broader context, this funding allocation is remarkable. The graph below shows that the level of capital expenditure is now over 3 times what it was four years ago in 2009 (and is higher still compared to earlier periods). The increase is part of a deliberate government strategy to raise the proportion of the budget dedicated to “investing activities”. Capital expenditure has risen from approximately 14 percent of total government spending in 2006 to 32 percent in this year’s budget. If spent effectively in the right areas, higher levels of capital expenditure can be expected to increase economic growth in the long run. 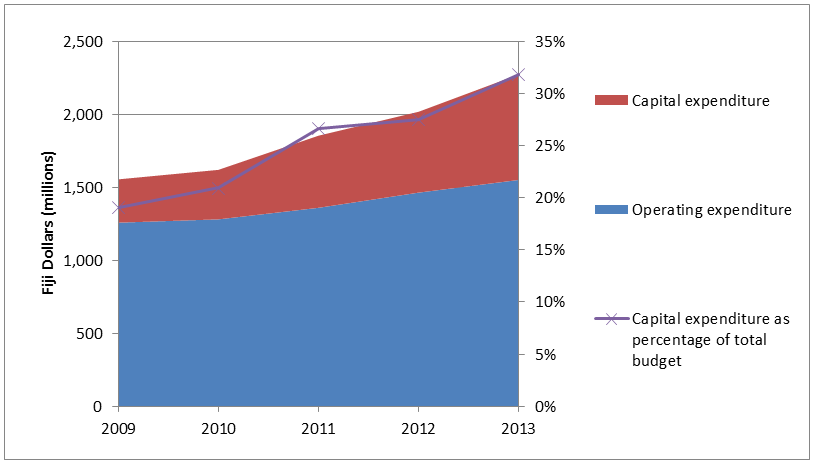 The 2013 budget is firmly focused on the roads sector, which comprises 55 percent of all capital expenditure. The attention on roads is justified. In Fiji, as in many Pacific island countries, roads have been allowed to deteriorate due to lack of maintenance. The asset management problem is due to both inadequate financial resourcing and lack of institutional capacity within the civil service. The Bainimarama government is attempting to address both issues. It has established the Fiji Roads Authority, which is taking over control of roads from the Department of National Roads. The transferal of responsibility is designed to move Fiji further towards a private sector contractor model, with three New Zealand based companies being contracted to address the maintenance backlog. The change is justified given implementation capacity constraints within the Department of National Roads. Bainimarama has argued that within the Department of National Roads “There was too much inefficiency, mismanagement and corruption and there was also too little knowledge and expertise.” However political motives are also likely to be behind the move. It was recently revealed that the government has referred senior Department of Roads officials to the Fiji Independent Commission Against Corruption (FICAC). The Fiji Roads Authority has received FJ$422 million (US$236 million) in the budget – FJ$395 million for capital expenditure and FJ$27 million for operating expenditure –  an increase of FJ$182 million on 2012 funding allocations to the roads sector.

Developments in other infrastructure sectors are less positive. The Water Authority of Fiji received a small (FJ$3 million) funding increase in this year’s budget. The Water Authority has achieved notable improvements in its operations since it was moved out of the Ministry of Works and Transport and a new CEO recruited several years ago. However the structural barrier to an effective water utility – a water tariff that is well below production costs – remains unaddressed. Given the public outcry when electricity prices were raised to reflect production costs in 2010, it is unlikely that this issue will be resolved until after the 2014 elections. At the same time, Bainimarama announced as part of the budget that the price of electricity would be reduced by 5 FJc/kWh, “based on an assessment by the Commerce Commission”. Government announcement of an electricity price reduction is peculiar, given that prices are supposedly set by the (autonomous) Commerce Commission as part of an independent regulatory process. Whatever the reality, government announcement of a tariff reduction gives the appearance of populist policy and lack of regulatory independence.

The biggest weakness of the budget is its failure to contain government spending. The FJ$2.3 billion budget  represents a twelve per cent increase in expenditure on last year, and will increase the fiscal deficit to 2.8 percent of GDP (or FJ$219 million). This is above the 1.5 percent target the government established last year when the 2012 budget was released. The actual deficit is likely to be higher still given the impact of Cyclone Evan, which Fiji’s Ministry of Finance estimates resulted in damages of FJ$75 million late last year. The Reserve Bank of Fiji has downgraded its economic growth forecast as a result of the cyclone. Lower economic growth will adversely impact government revenue.

The deficit has raised concerns in various quarters about government debt levels, which in September stood at 50.7 per cent of GDP (see the graph below). The opposition has been very critical, not surprisingly. The International Monetary Fund on previous occasions has also raised concerns. The 2011 Article IV consultations stated of the 2012 budget, which involved a smaller deficit of 1.6 percent of GDP, that: “The increase in public investment and reduction in marginal tax rates are important measures that could boost competitiveness and support growth, but they entail a significant fiscal cost” (italics are mine). 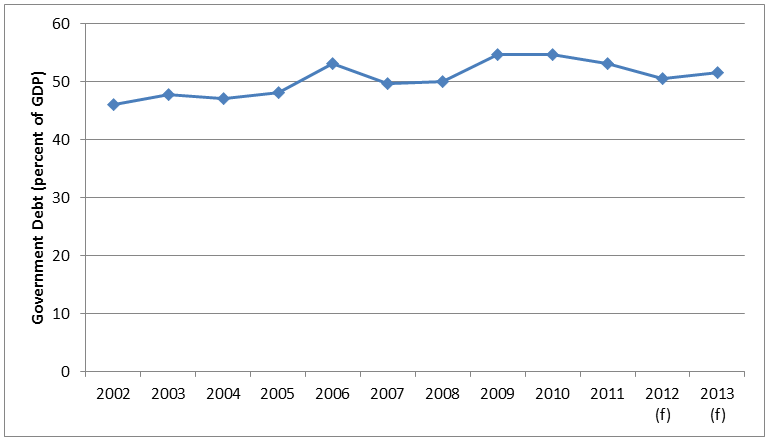 In my take on last year’s budget, I defended a deficit on the grounds that the Fijian economy was weak and could benefit from expansionary fiscal policy. The same argument cannot be used this year. The Fiji economy has performed strongly in 2012 compared to previous years, with estimated growth in real GDP of 2.5 percent (as shown in the graph below). The Fiji Government forecasts continued growth of 2.5 percent in 2013 (downgraded from a forecast of 2.7 percent prior to Cyclone Evan), and expects growth to be broad based across almost all sectors of the economy. Although the Asian Development Bank questions these forecasts, its prediction of 1.7 percent GDP growth is still better than actual annual economic growth from 2007 – 2011.  The point is that the improved economic environment does not warrant expansionary fiscal policy. 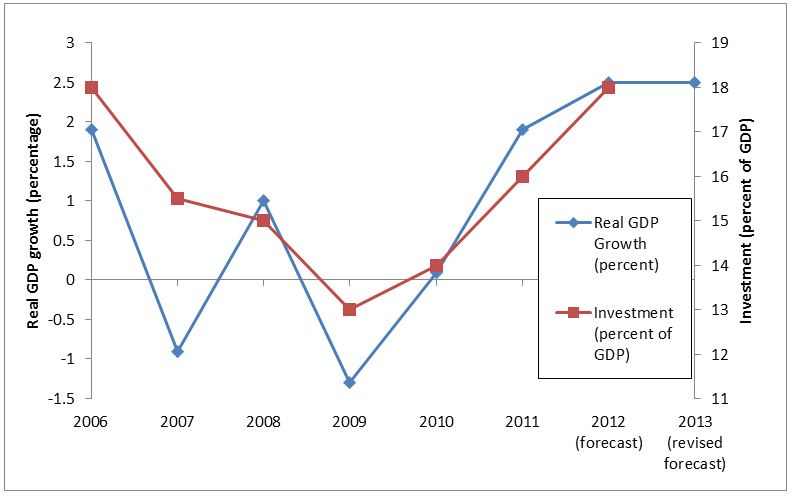 There are two reasons that the fiscal deficit in this year’s budget may be less concerning than would first appear. One reason, noted by the International Monetary Fund, is that the majority of Fiji Government debt is domestic, which lessens exposure to exchange rate movements. The second reason is that the bulk of the increased deficit is the result of spending on infrastructure. Without the increased capital expenditure announced in the budget, the deficit would have stood at 1.9 percent of GDP instead of 2.8 percent.

Prominent Fijian economists such as Mahendra Reddy, Biman Prasad and Wadan Narsey have pointed out that the composition of expenditure matters (here, here and here). Infrastructure development provides a platform for increased economic growth in the long run, enabling government to repay its debts. However for economic growth to occur, investment is necessary. There are encouraging signs. Investment has reached 18 percent of GDP, a level not achieved since before the 2006 coup (see the graph above). If investment is to rise further and meet the government’s target of 25 percent of GDP, higher levels of private sector investment will be needed. Political stability is crucial for this to occur. Experience shows that private sector investment collapses during episodes of political instability, as occurred in 1987, 2000, and 2006/07. The way in which a new constitution is established and elections held in 2014 are therefore significant for the growth prospects of Fiji’s economy. Recent moves by the government to discard recommendations made by the Constitutional Commission, as well as the symbolic burning of copies of the draft constitution, provide a less than hopeful start to 2013.

[i] Other announcements in the budget include a minor increase in the tax free threshold, small reductions in income tax rates, increases in the wages of non-established civil servants, creation of special economic zones in certain rural areas, removal of minimum foreign investment requirements, and establishment of state pensions for elderly Fijians with no savings.