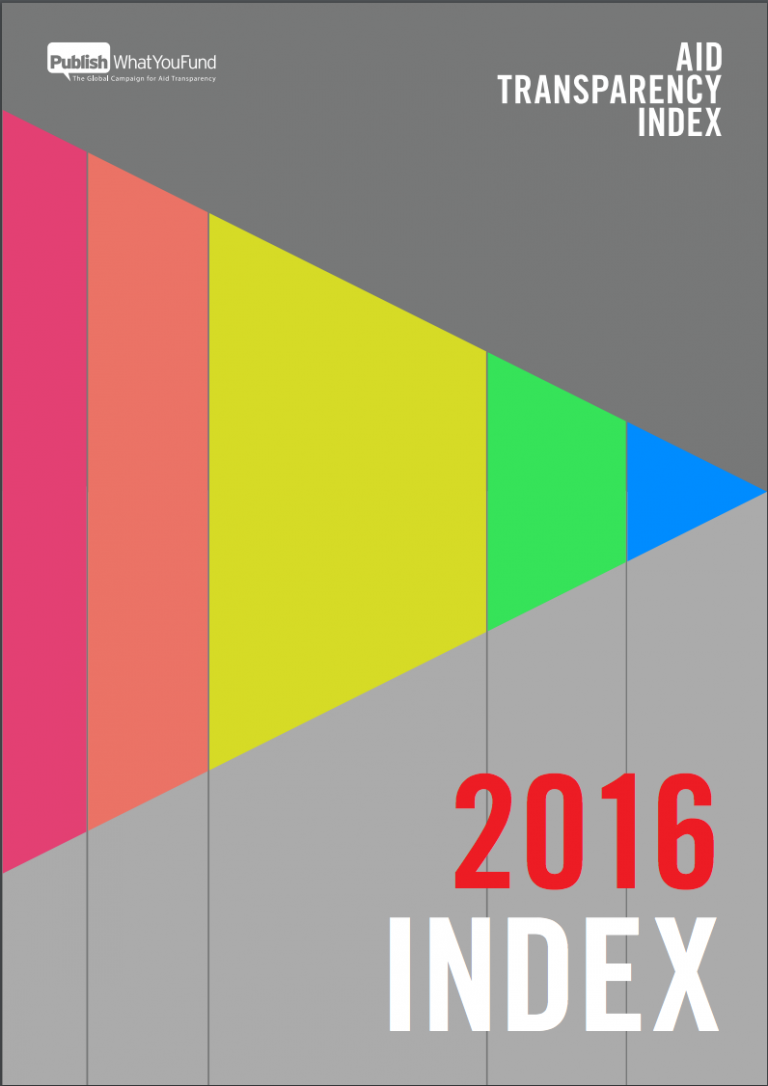 We will make the full range of information on publicly funded development activities, their financing, terms and conditions, and contribution to development results, publicly available.

So said participants in the Busan High-Level Forum on Aid Effectiveness a little over five years ago. December 2015 was the deadline for fully implementing the electronic publication of ‘timely, forward-looking and comprehensive’ information on development finance.

More than a year on from that deadline, nobody suggests that the Busan transparency commitment has been met. A late-2016 OECD/UNDP monitoring report on this and other Busan commitments, which must be considered a self-assessment, strove to present the situation in the best possible light. It said,

transparency is moving in the right direction … progress has been most notable in the timeliness and comprehensiveness of the information that is made publicly available, while the publication of forward-looking information continues to present a challenge for many development partners.

A more disinterested assessment, from earlier in 2016, was that of the organisation Publish What You Fund. They said,

despite progress over the last five years, analysis of 46 aid donors found that most have failed to uphold [the Busan] commitment.

By their reckoning, only 10 donors, accounting for 25% of global aid, had fully implemented the Busan transparency commitment. In addition, 28 of the organisations assessed scored no better, and often far worse, than ‘fair’ in Publish What You Fund’s 2016 Aid Transparency Index.

I recently discussed the state of play on aid transparency with Publish What You Fund’s London-based CEO, Rupert Simons, who will soon visit Australia to speak at the Development Policy Centre’s 2017 Australasian Aid Conference. We were joined also by Elise Dufief, the organisation’s Research and Monitoring Manager, who is in the process of reviewing the methodology used for the Aid Transparency Index. You can hear the full conversation here, or read a transcript here. The main points are highlighted below.

Publish What You Fund has long been a staunch proponent of the International Aid Transparency Initiative (IATI). Much of its early work, in the period 2008 to 2011, was about building development agencies’ commitment to transparency and, in particular, getting them on board with IATI. Over time, the emphasis has shifted to monitoring development agencies’ adherence to their transparency commitments. That’s where the Aid Transparency Index comes in. First published in 2011 and updated regularly, this assesses the visibility and quality of data on development finance and helps, in Rupert’s words, ‘to promote a race to the top’.[1]

As you would expect, IATI plays a central role in the Aid Transparency Index. To do well in the index, an organisation has to publish a decent amount of information according to the IATI Standard. Indeed, as Elise says, ‘to be in the Very Good category, you have to publish all your information to IATI’. That includes both financial and qualitative information. Publication also needs to be timely.

By contrast, the OECD/UNDP assessment mentioned above, the second of its kind, gave credit to organisations for participating in two parallel OECD data-gathering processes even if their IATI reporting was not great.[2] That might sound fair enough, but it’s not such a good thing. The parallel processes in question mainly involve transparency about financial allocations and flows rather than qualitative transparency (for example, transparency about project-related documentation). And they yield no information about what is happening in anything close to real time.

Why progress on aid transparency, when it’s good, is good

Disappointments notwithstanding, Rupert (with Owen Barder) does believe that there has been a lot of progress on a transparency over the last five years. He illustrates this from personal experience.

In 2009, I went to work in Papua New Guinea as a consultant advising the government on climate change—and one of my first tasks was to find out what all the other organisations in the country—donors, NGOs—were doing about climate change.

And really, the only way to find out was to get in a minivan and drive around Port Moresby, talking to all the donors in turn, and the bigger conservation and development NGOs, and try to build a picture through legwork.

Now, if you fast-forward six or seven years, it’s just not like that anymore. Whenever I visit a country on Publish What You Fund business, I can go online and take a look at the data on the IATI registry as to who is doing what and where, and, in some cases, you can also see the results.

Rupert adds that while only 25% of global aid meets the highest transparency standards, over 90% of official development finance is covered by some kind of information publication scheme.

The big challenges now, Rupert believes, relate to quality and utilisation. Many donors are reporting only partial information, or are updating information infrequently, and many donors have not integrated the IATI Standard into their internal management systems. In addition, many parties with an interest in the information published lack the tools and capacity to make good use of it.

Where donor organisations have done particularly well on aid transparency, Rupert observes, this has invariability resulted from high-level political commitment, as seen in the UK when Andrew Mitchell was Secretary for International Development, and as seen at UNDP under Helen Clark’s leadership.

In Australia’s case, Rupert notes, political commitment appears to have flagged since the change of government in 2013. Nevertheless, he thinks it would require no great effort for Australia to rank substantially higher than it has to date—we are persistently just ‘fair’—in the Aid Transparency Index.

It’s not just Australia. There’s a large question in Rupert’s mind about the level of political commitment to aid transparency in many donor countries at the present time. He was recently at the Nairobi High-Level Meeting of the Global Partnership for Effective Development Co-operation, and came away with the distinct impression that the aid effectiveness agenda, including the aid transparency agenda, has ‘gone off the boil internationally’. He supposes that this is due, at least in part, to a loss of trust in multilateral processes across several policy domains.

Undaunted, Rupert takes the view, which seems to me right and important, that what happens at the level of individual developing countries is more important than what happens in multilateral conference halls. This is particularly the case in relation to non-DAC bilateral donors.

Whereas at Busan, we felt there was an attempt to bring [non-OECD bilateral donors] into the multilateral system by making them commit to the Busan principles, it was apparent at Nairobi that that agenda has broadly failed and that the way to bring new players up to international standards of transparency will be through pressure put on them by their partners at country level.

We are aware of examples, both in Africa and in the Asia-Pacific, in which the emerging donors, including the Chinese government, were a lot more responsive to partner country demands at the local level than they would appear to be at the international level.

If development agencies were only transparent in places where they had to be, in order to secure their licenses to operate, then clearly external observers would never be able to gain a complete picture of those agencies’ work, let alone form a view about how sensibly and effectively aid from those sources is being allocated and used. (Even if donors were entirely transparent at the level of individual countries, a very large proportion of ‘bilateral’ aid is now provided outside country allocations.[3])

This suggests, and Rupert agrees, that there is a continuing need to focus advocacy and technical effort as much on the supply side as on the demand side. One specific objective here is to persuade donors not only to release data but also to make it digestible and manipulable by building donor-specific IATI portals. Publish What You Fund has regularly urged Australia to do just that.

A more ambitious objective would be to persuade somebody (I would say, as argued here, that it should be the OECD’s Development Assistance Committee) to develop a well-functioning central portal for accessing and manipulating IATI information from all sources. Without this, it is hard to perceive quality shortfalls relative to good practice and to undertake cross-country comparisons. Rupert agrees that there’s a need for greater investment in tools for mining the growing stock of available data, but is sceptical about the feasibility of a global portal.

I don’t think we will ever end up with one global data set that contains all the information we want to know about aid and development because it is such a vast and diverse industry. What I think we can do is invest in tools that allow people to aggregate, for research purposes, what aid is going where for what purposes.

Perhaps I’m a little at odds with Rupert on that point. I think existing global portals, though too crude, point the way. And I think that only a global comparative perspective on aid information can support the sorts of increasingly sophisticated like-for-like comparisons between development agencies that need to be made if there is to be a real ‘race to the top’ on transparency.

If there’s one general point that I took from our discussion, it was that aid transparency advocates should waste no time ruing the pointlessness of various multilateral processes and conferences, and should simply push forward on both the supply and demand sides wherever the going is good. Progress will be uneven, but peer and consumer pressure will tend to even things up.

Robin Davies is the Associate Director of the Development Policy Centre. Rupert Simons will speak about progress on aid transparency in session 2(f) of the 2017 Australasian Aid Conference, on Wednesday 15 February. Publish What You Fund was accepting public submissions in connection with its Aid Transparency Index methodology review up to 3 January 2017 but remains open to additional input from any source—which can be directed to tracker@publishwhatyoufund.org.

[1] It is expected that the Aid Transparency Index will next be updated in the second half of 2017.

[2] The OECD/UNDP assessment process looked at the provision of data across three data-gathering and reporting processes, namely those associated with IATI, the OECD’s Creditor Reporting System, and the OECD’s annual Survey on Donors’ Forward Spending Plans. The idea in Busan was that by about the end of 2013 there would be a ‘a common, open standard for electronic publication’ of information on aid flows and activities. Predictably, subsequent discussions among specialists led them to conclude that it was not feasible to merge the several existing data-gathering and reporting processes.

[3] In the policy brief described here, I noted that aid to ‘developing countries, unspecified’, which is counted as bilateral aid but not attributed to individual countries, stood at close to 30% of all bilateral aid outflows from donors in 2014.