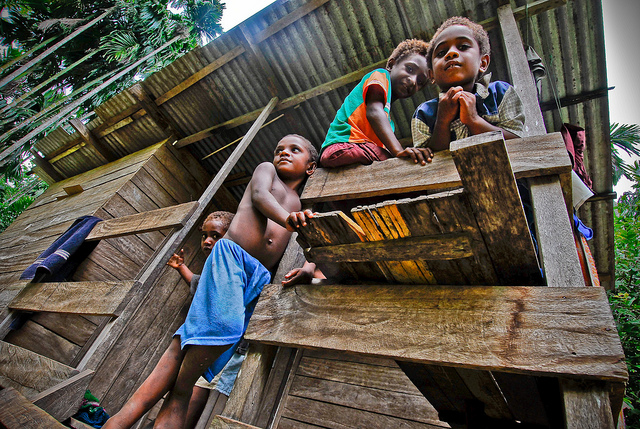 Sixteen months can be a long time in PNG-Australia relations. Since the Senate launched an inquiry into the “delivery and effectiveness of Australia’s bilateral aid program in Papua New Guinea” in December 2014, much has changed – budget challenges following the continuing slump in commodity prices, diplomatic fallout over a proposed diplomatic mission in Bougainville, PNG’s 40th anniversary of independence, widespread drought caused by El Niño, the dismissal of 15 Australian advisers from PNG government departments, and most recently dissent over the Manus Island detention centre arrangement. These developments, on top of an already broad terms of reference and a report deadline hastened by the early dissolution of the 44th Parliament, must have made arriving at any solid recommendations a challenging task.

Nevertheless, the Senate Foreign Affairs, Defence and Trade References Committee scraped through with some 18 official recommendations (plus a few dissenting opinions offered by the Coalition and Greens representatives on the Committee – more on that below). However, the likely utility of these recommendations, like the topics they address, seems to vary considerably.

On the positive side of the ledger, a clear theme running throughout the inquiry report is an emphasis on promoting inclusive and equitable development (Recommendation 3). Three further recommendations offer specific suggestions for ways to realise improved living standards for broader swathes of PNG’s population. Noting that only four per cent of Australia’s aid to PNG is delivered by NGOs (compared to 58 per cent by contractors), the report recommends channelling more support specifically through those NGOs, civil society and churches that are “delivering assistance to rural and remote communities” (Recommendation 5). It also proposes adding a “social accountability” component to the planned PNG Governance Facility, in order to strengthen community demand for good governance and service delivery from the bottom-up (Recommendation 9). In what seems to be a constructive critique of the Australian Government’s emphasis on private sector engagement, Recommendation 14 advises ensuring that private sector programs demonstrate a focus on micro-business, small and medium enterprises (SMEs), and the agricultural sector, where the majority of Papua New Guineans make their living. One gets the sense that there is a desire to make inclusive development a kind of cross-cutting emphasis in Australia’s PNG aid program, akin to gender and (according to evidence given by DFAT) governance (p. 37).

Less usefully, and perhaps predictably, there are several recommendations that call for simply delivering more aid: more support for tuberculosis prevention and treatment (Recommendation 10), new programming and tracking of childhood malnutrition and stunting (Recommendation 11), and more support for primary school teacher training (Recommendation 12). And all of these are presumably to be enabled by Recommendation 1: that aid funding cuts to PNG be reversed and the overall Australian aid budget more broadly be progressively increased to 0.5 per cent of GNI by 2024-25. Given that PNG was largely spared from the 2015-16 funding cuts (losing a comparatively minor 5 per cent of funds), this is effectively a call for not just a reversal of cuts but a substantive increase in aid to PNG. Yet while TB, childhood nutrition, and teacher training are clearly areas very worthy of aid, even if there was spare change in the Australian aid budget, the extent to which the amount of funding is the key barrier to progress is arguably open for debate.

And then there are a suite of recommendations, with varying levels of substantiation, for delivering aid more effectively. Some are eminently sensible – for example, Recommendation 13 calls for improved coordination between the various programs now in place to address gender inequality and gender-based violence, in order to extend their reach and reduce duplication. Recommendation 7, on institutional linkage programs between Australia and PNG, promotes another potential method for delivering support and capacity building. However, the report provides only one example – the Pacific Parliamentary Partnership Project – without any indication of evaluation and/or evidence of success in practice, and also notes that the evidence for technical assistance/advisory support is decidedly mixed. To that end the final recommendation, which simply endorses continued support for and use of research on aid effectiveness (Recommendation 18), is an underwhelming conclusion to a very illuminating discussion in Chapter 6 covering a range of issues related to evaluating the effectiveness of Australia’s aid to PNG. Recognition of the near-absence of mutual accountability in practice stands out.

Finally, there are a couple of puzzling recommendations that could well masquerade as terms of reference for Senate inquires of their own. For example, though the evidence cited of communicable disease and biosecurity threats (including TB, drug-resistant malaria, and a mildly terrifying-sounding tapeworm) is convincing enough, the subsequent recommendation to “assess how cross-border initiatives with Papua New Guinea and Indonesia could contribute to the objectives of Australia’s aid program” (Recommendation 8) left me scratching my head. And it’s hard to give Recommendation 15, on expanding access to the Seasonal Worker Program (SWP), any serious consideration, not least because it appears to have been based largely on a request from the PNG government to do so. In any event, the recommendation will probably be paid little attention given that the SWP recently enjoyed its own dedicated inquiry, with a detailed report issued just one day after this one appeared.

Any report issued on the eve of an election being called is of course also a prime opportunity for parties to have their say, which the Coalition and Greens representatives both take up. The content is very much what would be anticipated: after blaming Labor as the ultimate cause of aid budget cuts (p. 85), as has become their custom, much of the Coalition’s ‘dissenting report’ focuses on defending the Government’s private sector emphasis. (Less expected and frankly quite inexplicable is the Coalition’s unabashed adoration of Youth with a Mission [YWAM], including a specific endorsement in the Coalition’s alternative Recommendation 3). The Greens commentary, while emotionally charged, regrettably loses some of its punch on factual errors, where, for example, it calls for the abandonment of the already defunct Mining for Development Initiative.

Despite haggling over the details, there is clearly consensus throughout the report on one thing: “Australia’s most important development relationship is with Papua New Guinea” (p. xv). But an important relationship does not an effective aid program make, as the Manus Island detention centre arrangements clearly demonstrate. On that note, it is encouraging to see a recommendation that “the Government conduct an assessment of the impact of the closure of the Manus Island Regional Processing Centre on development activities” (Recommendation 6). (Notably, in their dissenting report the Coalition Senators neither endorse nor explicitly reject this recommendation.)

Overall, the inquiry report offers some highly sensible recommendations, which would almost certainly contribute to a more effective Australian aid program in PNG if implemented. The emphasis on inclusive and equitable development is particularly laudable, especially in light of growing indications that the LNG project will fail to deliver broad development to all Papua New Guineans. Unfortunately, given that the government is now in caretaker mode, it seems unlikely that this report will receive an official response any time soon, if ever. Much has changed in PNG over the last 16 months, but whether much will change in the delivery of Australian aid as a consequence of this inquiry remains to be seen.