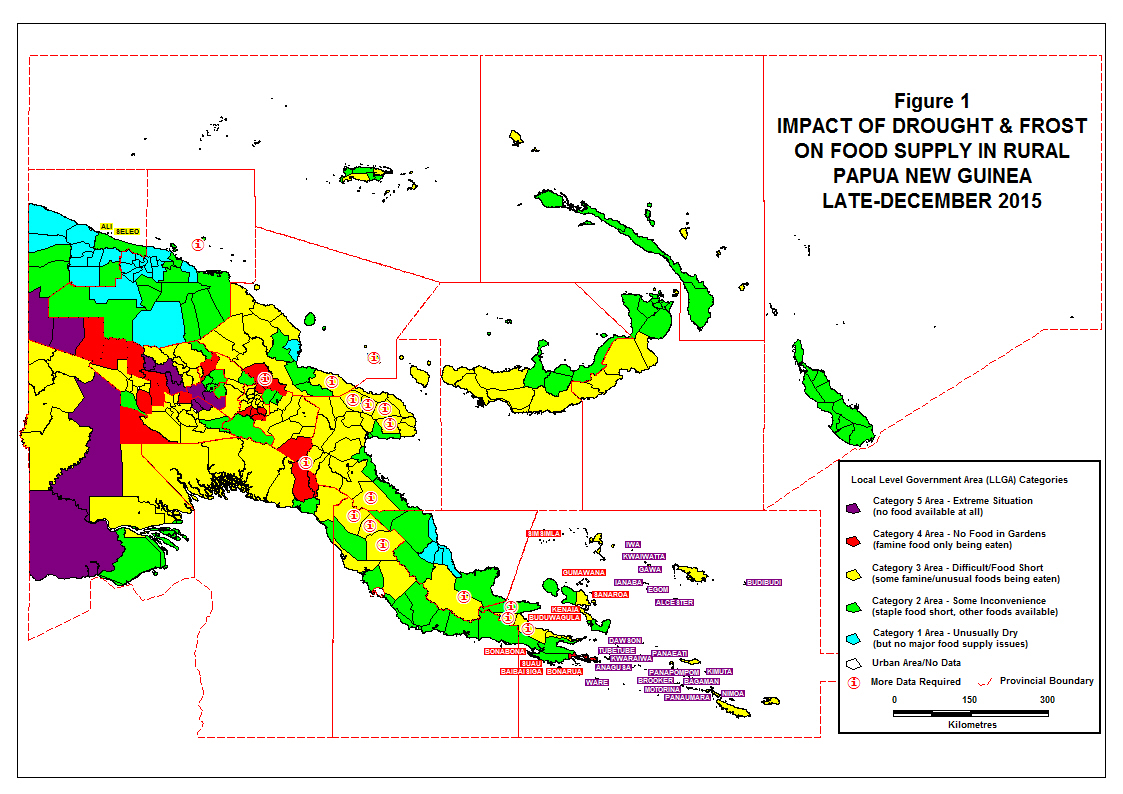 During 2015, much of rural Papua New Guinea (PNG) has been harshly impacted by a severe drought and, at a number of very high altitude locations, by repeated frosts. The impact is similar, but not identical, to that of the major 1997 drought and frosts [pdf]. The El Niño associated drought had a major impact on water supply in very many parts of PNG, with negative impacts on school operations, women’s labour and villagers’ health. Wildfires have caused considerable damage to buildings, forest and grasslands in some locations. In many locations, subsistence food supply is affected and rural villagers are short of food. There are strong indications of an increase in the crude death rate in several remote locations, as well as claims for a higher than normal death rate in other locations.

Villagers have responded in a number of ways, including by purchasing food, mostly imported rice, which has resulted in an estimated 35–40 per cent increase in rice sales. Other responses include consuming unusual foods (‘famine foods’) or usual foods in much greater volumes than normal; migration to other rural or to urban locations; dispersal from villagers seeking sago stands; and sourcing drinking water from unusual sources, such as large rivers.

We assembled [pdf] over 200 reports, including eight formal assessments and numerous informal observations, on the impact of the drought and frosts on food supply in rural PNG. These have been summarised in a database, and a map (GIS) and tables generated at the Local Level Government Areas (LLGAs) level. In 27 of the 271 rural LLGAs, food from all sources is reported to be very or extremely short. Food is also extremely short in a number of small islands in Milne Bay Province, which fall within LLGAs where conditions are not as dire. People suffering the greatest food deficit are located in four ecological zones: very high altitude (over 2200 m) in parts of four highland provinces; a number of locations in the central highlands or fringe of the highlands; interior lowland locations in Western Province; and many small and remote islands in Milne Bay Province.

Since November, rain has fallen in many locations in PNG and this has eased the water supply situation. Despite this, access to clean drinking water remains a problem for villagers in a number of locations in the far south of PNG, in particular in southern and central Western Province, and on small islands in Milne Bay Province. Following recent rain, villagers in many locations, including in the central highlands, are currently re-planting food gardens and fast maturing green vegetables are starting to become available.

Despite the recent rain and the distribution of food in some places, food remains very scarce for rural villagers in a number of areas, including: very high altitude locations (over 2200 m altitude), where all food crops were destroyed by repeated frosts in July to September; many remote locations in inland Western Province, where lack of water prevents people from processing sago and food gardens are not producing; and a number of remote locations on the fringe of the central highlands, such as inland Gulf Province near the border of Eastern Highlands and Morobe Province. Carbohydrate staples, including sweet potato and banana, are scarce for villagers in many other locations as they wait for newly planted food crops to mature.

Based on patterns in the 1997-98 drought [pdf] and recovery phase, we anticipate a sharp increase in the death rate in a limited number of very isolated locations as the rain returns and the recovery begins. This is because villagers work hard to re-establish food gardens while they remain very short of carbohydrate food, and their health is compromised by a reduction in resistance to an increased disease burden.

R.M. (Mike) Bourke and Bryant Allen are Honorary Associate Professors at the ANU College of Asia and the Pacific at The Australian National University. Dr Michael Lowe is an independent consultant. This blog post summarises Development Policy Centre Policy Brief 11, ‘Estimated impact of drought and frost on food supply in rural PNG in 2015’, which is available here [pdf].

Dr Michael Lowe is an independent consultant. He was the GIS manager of the two national assessments of the availability of food and water during the 1997 drought in PNG.