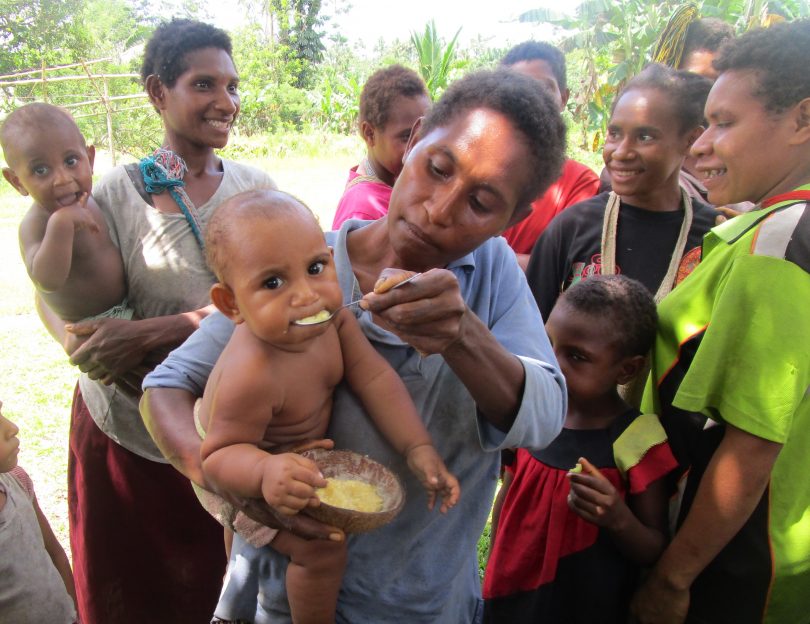 Malnutrition is a serious problem in Papua New Guinea (PNG). It can result in irreparable physical and cognitive damage. It is not uncommon to see children in PNG apparently suffering from kwashiorkor, an extreme symptom of undernutrition. The PNG National Nutrition Survey in 2005 found that 43.2% of 6- to 59-month-old children were stunted (impaired growth and development indicated by low height for age), 5.5% were wasted (low weight for height) and 18.1% were underweight (low weight for age). Malnutrition was higher in rural than in urban areas.

Relevant data from Western Province are lacking, but are needed to inform local solutions. Data on child growth rates can guide early nutritional and health interventions before clinical symptoms of malnutrition appear.

In late 2018, we conducted a malnutrition survey of children at villages in the disadvantaged Strickland Bosavi region of Western and Hela provinces. This was three years after a serious drought and 10 months after a devastating earthquake had affected the region. This survey provided baseline data for a Rotary-sponsored project to alleviate malnutrition, based on Food Plant Solutions philosophies.

We measured the we 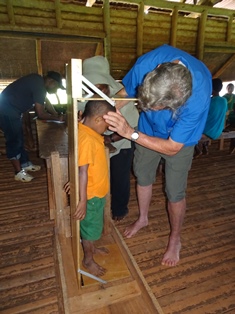 ight and height of 341 children (174 boys and 167 girls) under five years of age who were present at the Bedamuni and Edolo villages of Mougulu, Adumari and Huiya. Mid-upper arm circumference (MUAC), an indicator of wasting, was also measured using a MUAC tape, at Huiya and surrounding villages only.

Many of these children were from families who had been displaced from their home villages by the magnitude 7.5 earthquake of February 2018. Participation was representative of community groups, and voluntary, with mothers and children invited to central survey sites.

Guidelines based on PNG child growth data were developed for PNG’s national nutrition survey in 1982–83, but we used the more readily available World Health Organization (WHO)/World Vision International guidelines to estimate wasting, stunting and underweight for each child. A child was considered to be malnourished if any one of these values was less than critical levels from WHO standard child growth tables. International standards overestimate stunting and underweight, but not wasting, compared to the PNG standards.

Each of these indicators covers a different aspect of malnutrition so, in combination, they provide a more complete insight into a child’s nutritional status. MUAC is widely used in PNG because it is easy to measure and, in this survey, indicated malnutrition when other measures did not.

The table below shows that slightly over 40% of the children exhibited at least one criterion of malnutrition (stunting, wasting, underweight or MUAC). 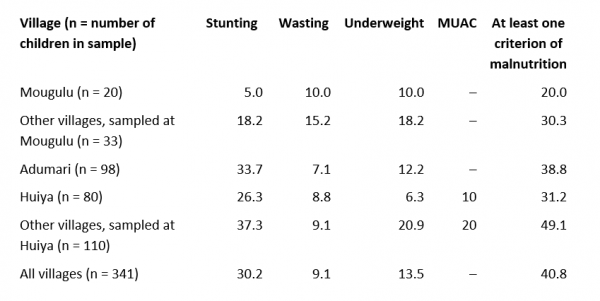 The incidence of malnutrition varied with location. Stunting was the most common expression of malnutrition, particularly among children who had sought refuge at Huiya and those who resided at Adumari. Children from these locations also showed the highest overall incidence of malnutrition (i.e. at least one criterion). Wasting was much higher for children from villages associated with Mougulu than from any other village. Underweight was also high at these villages, though it was even higher at the refugee villages associated with Huiya.

At Huiya, this age group difference was most pronounced among children who had been displaced by the earthquake. The home villages of all these children were seriously affected, with many gardens destroyed in landslides. While this may have exacerbated malnutrition, the drought of 2015–16 is likely to have had more influence. Stunting is a chronic condition that arises from malnutrition experienced during the critical first 1,000 days of a child’s life (from conception to two years of age).

Eighty of the 341 children surveyed (23.5%) were severely malnourished. Lingering effects of the drought of 2015–16 may be implicated and, for refugee children at Huiya, the February earthquake may have exacerbated expressions of malnutrition.

Only 20.6% of children had received three or more vaccinations (for hepatitis B, measles and triple antigen, which provides protection against diphtheria, tetanus and whooping cough or pertussis). A further 42.3% had received either one or two, and 31.1% of children had not had any vaccinations. Malnutrition was reduced slightly with increased level of immunisation: 50.4%, 40.8% and 39%, respectively, for zero, one or two, and three vaccinations. While this may illustrate a positive influence of national vaccination programs, the capacity of health services to address malnutrition remains limited in the Strickland Bosavi region.

The high levels of overall and severe malnutrition suggest an urgent need for remedial action in this region of PNG. The situation at and near Huiya and Adumari appears particularly bad, with high levels of stunting. Many villages near these focal communities have no on-site medical support. Follow-up work is needed to identify malnourished children and to guide provision of a regular, well-balanced, nutritious diet and, as needed, treatment.

For children up to five years old, a balanced, nutritious diet is essential for unimpeded body and brain growth and development. Children need about half the amount of nutrients required by adults (ca 4,300 kJ energy and 25 g protein per day), but their stomachs are small so it is difficult for them to consume sufficient low-energy foods to supply their daily requirements. Children need some additional high-energy and protein-rich foods in their diet, for example, corn porridge, boiled mashed bean seeds, or coconut milk mixed with staple foods for babies, and seeds and nuts for children older than 12 months.

The project to alleviate malnutrition in Western Province has raised awareness of the importance of good nutrition by about 2000 families, thanks to the wonderful team of local volunteer instructors who delivered 41 village nutrition workshops throughout the region. The next phase of the project, with support from Cross Sector Partnership Initiative (XSPI) collaborators and funding bodies, will focus on sustainable adoption of better diets for children.

Whether or not people in Western Province experience hunger is not the issue (and Bourke disputes this claim anyway) – that its children do not consume a well-balanced and nutritious daily diet is indisputable.

This survey was undertaken with support from the Rotary Foundation and Rotary Clubs and in collaboration with the CARE International Earthquake Recovery Team. The views are those of the authors only.

Russ Stephenson is an agricultural scientist, and was a senior lecturer in agriculture at the University of Papua New Guinea from 1975 to 1979. He is a Rotarian, and leads the Rotary Alleviation of Malnutrition Project in Western Province of PNG.

Shirlynna Lowagipo is a trained nurse. She was the nutritionist on the CARE International Earthquake Recovery Team after the 2018 earthquake in PNG, and supervised collection of survey data.