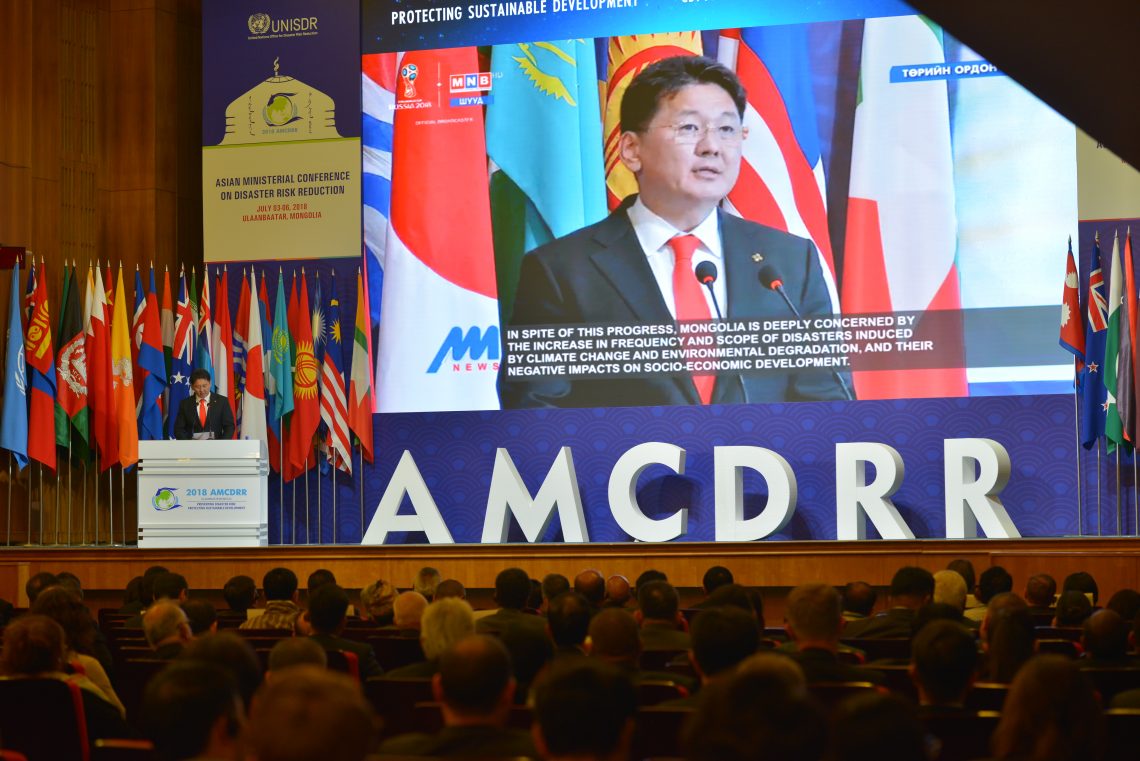 Australia’s hosting of the 2020 conference will see a stronger focus on the Pacific (Credit UNDRR Flickr CC By-NC-ND 2.0)

Disaster risk reduction (DRR) is everyone’s business. Or so the saying goes.

Yet a quick search of the Devpolicy blog archives yields a disappointingly low number of hits – sixteen blogs came up in a search of DRR across the last eight years’ worth of commentary, but only four dealt with the topic in any substantive way. (It should be noted this search covered a timeframe when both the Sendai Framework for DRR and Framework for Resilient Development in the Pacific were both launched).

I suspect that the absence of commentary in this blog reflects a general malaise about DRR in the Australian development sector. Aid sector advocacy on DRR hasn’t changed – for the last four years, ACFID’s budget ask has been to increase DRR investment to 5% of ODA. Advocacy effectiveness is however, hard to measure as DFAT’s reporting makes it difficult to track DRR spend – DRR is conflated with preparedness and response in the budget line and the only way to get an understanding of total spend that includes expenditure in country, regional and multilateral programs is via Senate estimates.

This malaise is in an environment where the Australian Government is spending more on humanitarian assistance than ever before and the evidence for the cost-effectiveness of such investments in DRR is increasingly widespread.

In an announcement that gained little public attention last year Senator Concetta Fierravanti-Wells, then Minister for International Development and the Pacific, announced that in June 2020 Australia would host the Asian Ministerial Conference on DRR. Set to have a more intentional focus on the Pacific and become the Asia Pacific Ministerial Conference on DRR under Australia’s leadership, APMCDRR (try to say that three times quickly) puts DRR up in lights for Australia in the next 12 months.

APMCDRR is a biennial conference, organised by the Asia Pacific Regional Office for UNDRR (the agency formerly known as UNISDR) and Asia Pacific states. The conference is an opportunity to address global and regional disaster challenges and strengthen domestic capacity and commitment for implementing the Sendai Framework for Disaster Risk Reduction. As conference co-host, the Australian Government plays a critical role in setting the conference agenda and thematic focus.

2020 is a crucial moment in the implementation of the Sendai Framework. A third of the way through the Framework’s implementation, 2020 marks the first Sendai Target deadline (Target E): a ‘substantial increase’ to the number of countries with national and local disaster risk reduction strategies. It also marks the start of the decade of focus for Target A: substantially reducing global disaster mortality and Target B: substantially reducing the number of affected people. At this critical point, the opportunity for Australia is to mobilise and accelerate progress on Sendai implementation.

The Asia Pacific region is one of the most disaster-prone in the world, and a person living in the region is five times more likely to be affected by a natural hazard than those outside. Since the 1970s disasters have cumulatively affected over 2.2 billion people and caused more than USD400 billion worth of damage. The region has benefited from significant progress on DRR, however still accounts globally for over half of the deaths and people impacted from disasters. While 38 countries in the region have some type of DRR guiding document, only 18 of these are aligned with the Sendai Framework – and there is still much more to be done in shifting the paradigm from disaster management to risk prevention and reduction.  Ensuring the implementation of effective DRR policies, at the local, national, regional and international levels remains critical.

At the Australasian Aid Conference earlier this year, World Vision Australia convened a panel discussion asking this very question. In the context of the region’s challenges, will the conference be proved as nothing but a talkfest, or will it represent an opportunity for meaningful progress in the region? The panellists were optimistic – noting the increasing rigour and commitment to reducing disaster risk that each regional platform had brought to date.

Some of the ideas that have remained with me in the months since, include:

The panel discussion acknowledged that the opportunities of APMCDRR2020 ran both ways – Australia shouldn’t be too proud to acknowledge it has as much to learn from the region as it does to contribute. Australia can learn from the experience of some regional countries in responding to compounding, cascading events (as noted in Robert Glasser’s recent ASPI report). It was also suggested that DRR could be better mainstreamed across major sectors in Australia, not just the sole purview of emergency management personnel.

If it is true that DRR is everyone’s business, a successful conference in 2020 is not the sole responsibility of a limited few in government. All of us – domestic and international, DRR and non-DRR professionals – need to think about how to strengthen disaster risk reduction initiatives in our own work, and what we can bring to making the conference the success it needs to be.