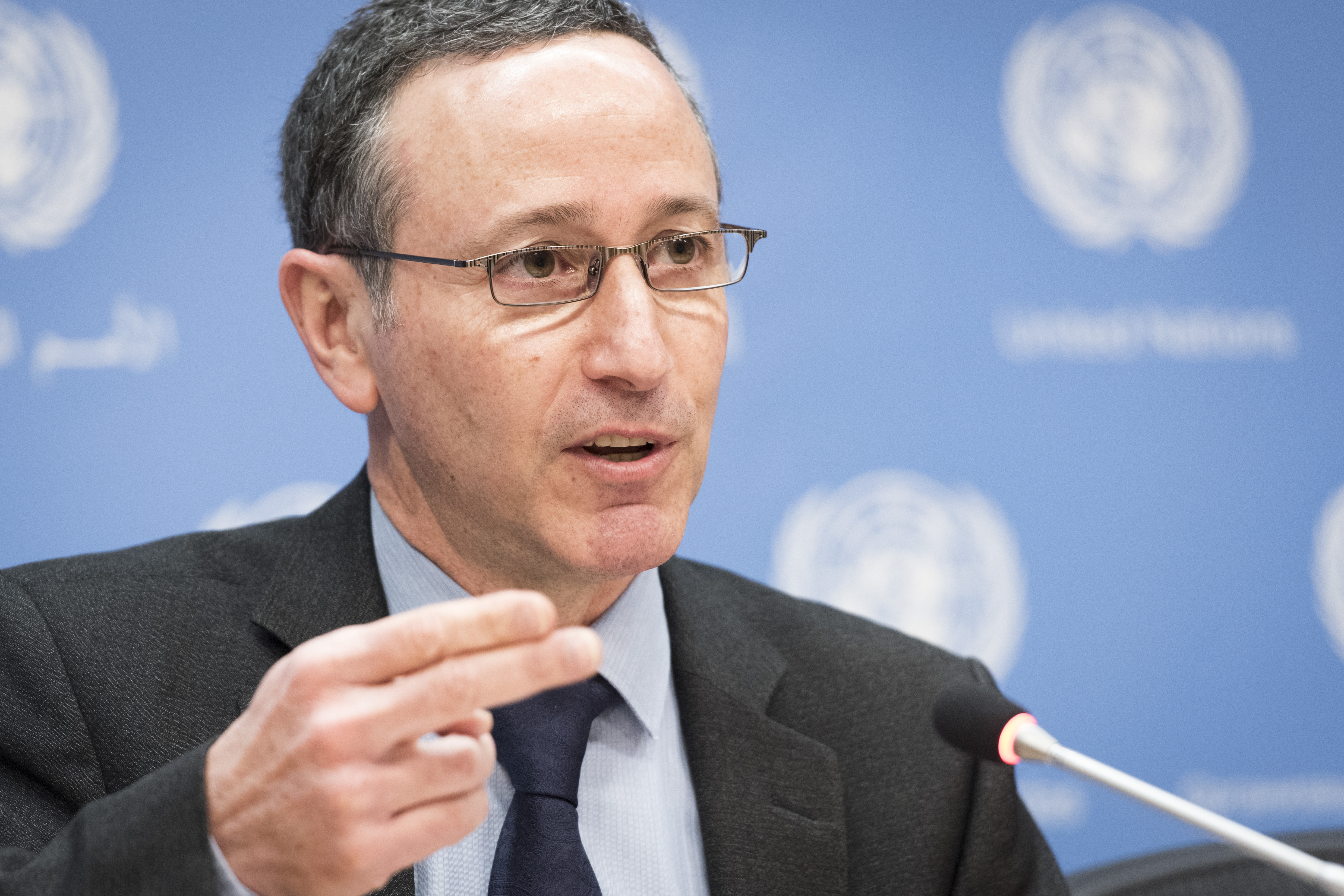 Disaster risk reduction (DRR), and its interface with climate risk management and adaptation, is a topic of increasing interest in international development, particularly for those working in the Pacific. Robert Glasser is the Special Representative of the Secretary-General for Disaster Risk Reduction in the UN Office for Disaster Risk Reduction, otherwise known as UNISDR. Camilla Burkot spoke with Robert about developments in DRR globally and in the Pacific, links between disaster and climate risk, and the role that UNISDR plays. You can listen to the podcast here, and read the full transcript here [pdf]. For an abridged version of their conversation, read on.

Camilla: To begin, perhaps could you just paint a quick picture of global trends in disaster impacts.

Robert: If we look over the last decade or so, we’re seeing a drop-off in the number of deaths from disasters overall, although in less developed countries we’re not seeing the same drop-off in loss of life.

At the same time, we’re seeing a continuing increase in economic losses from disasters. So clearly investments are not risk-informed – hospitals being built in flood zones where they’re vulnerable to storms and the like. So we’re seeing an increase in the economic costs, and it’s going up quite rapidly; $300 billion a year is a conservative estimate. It could be twice that number, we currently don’t have complete data on the costs from all disasters, large-scale and small-scale.

I think there’s generally growing awareness of disaster risk in countries. The main challenge is to move from managing disasters to managing disaster risk. And that really means incorporating risk in the budget process, for example. We’re seeing huge progress in some countries, like Bangladesh and Mexico, where various efforts to incorporate risk reduction in their core economic decision-making has resulted in major improvements and big drop-offs in loss of life in disasters.

Globally the OECD estimates that there will be US$50 trillion in new investment in infrastructure over the coming decades. If those investments aren’t informed by disaster and climate risk, then we will see huge continuing increases in economic losses from disasters.

Camilla: I understand you recently attended the Pacific Platform for Disaster Risk Management in Fiji. Can you tell us about the key themes emerging from that meeting, and any outcomes or recommendations?

But the Pacific is one of those places where there’s huge overlap between disaster risk and climate risk and adaptation.

If you look back over the last couple of decades, 90% of the major disasters have been hydro-meteorological disasters; basically, those disasters that are increasing in frequency and severity as a result of climate change. In the Pacific, disaster risk is, for the most part, about increased storms and sea level rise, which for some countries is really a matter of their survival.

Camilla: To date, UNISDR has been a fairly low profile agency. Is that about to change, now that the Paris Agreement is in effect?

Robert: You know, I would be very happy for UNISDR to be a very low-profile or even invisible organization, if disaster risk is prominent and is being addressed effectively and integrated with climate change adaptation.

UNISDR is a small organization. It’s about 120 people around the world, many in regional offices, including 2 people in the Pacific region. I don’t think it will ever be like UNDP, or the World Food Program, which are very large organizations and have a higher profile.

Our job, or at least my job as the UN Secretary-General’s Special Representative for Disaster Risk Reduction, is to do what I can to raise the profile of risk, to congratulate countries when they’re moving in the right direction, to be a critical friend, and to try and move these discussions forward.

Camilla: What would you define as the core business of UNISDR?

Robert: There are three main areas of work that we focus on.

First, UNISDR is effectively the secretariat for the Sendai Framework. That means we are facilitating the process to develop indicators for each of the goals that were agreed by countries. We’ll manage that process to monitor implementation, gather the data and analyse what progress is being made, where are the gaps, what themes are emerging. It’s also linked to the Paris Agreement and the SDGs, because the same indicators we’re developing for Sendai are going to be used as the indicators for the SDGs.

The second is to support countries to be able to implement the Sendai Framework. There are a couple of key steps in that process. There’s technical support, sharing best practice and examples, and helping them set up the pieces they need to develop their strategies and to begin implementing them; for example, can they measure what disasters have cost? Have they evaluated the risks in the future? Are they able to then take that and have a discussion with treasuries and finance ministries to embed risks in planning?

With those pieces, then countries can implement the strategy, which is the earliest deadline in the Sendai Framework: by 2020, countries should have national and local level DRR strategies. If those [measurement and costing] elements are in place, it’s easier to have a real strategy, as opposed to a piece of paper that sits on a shelf.

And then the third area of work is advocacy, working with stakeholders, civil society, and the private sector. I mentioned that $50 trillion of investment in new infrastructure – over 70% of that will be implemented by the private sector. So if the private sector isn’t brought in to address disaster risk, we’re not going to get there. And though they’re not really a stakeholder because they’re part of us, advocating within the UN system itself, to integrate risk reduction and climate risk across UN agencies, is part of that advocacy work as well.

Camilla: On the topic of technical assistance, do specialized agencies in developed countries, like Geoscience Australia for example, have something to offer developing countries?

Robert: They are totally relevant. In fact, just before coming [to this interview] I had a meeting with Geoscience Australia, CSIRO, and the Bureau of Meteorology, to talk about science and technology in support of disaster risk reduction. At least a third of the discussion was about how Australia can support countries around the world, particularly in the Pacific and Southeast Asia, to incorporate Australian science for early warning systems, for technologies on how to build back better, on flood management, on earthquake modelling.

But actually making and sustaining those links across can be a challenge. I remember from my days at AusAID, the institutional capacity and the weakness of institutions is a barrier to embedding science and technology. We have all these tools, but the absorptive capacity is a huge challenge.

Camilla: Lastly, I’m wondering if you could comment on the strengths or weaknesses of the UN system, relative to your past experience.

Robert: I feel really strongly that the piece the UN provides is multilateral space. There are a lot of flaws in the UN system, and they reflect the flaws in the international system, but there is this little precious thing called multilateral space, where things can happen that would not be able to happen outside of it.

There are pressures to close that space in every direction. But I feel, as a senior person in the UN, part of my job is to try and do what I can to push it open some more. And DRR is one of those areas where you can get people around the table, you can demonstrate progress, you can demonstrate what the multi-level action can deliver.

So in my work, in my advocacy, I always try to keep that. It’s not just about DRR and climate change. It’s also about the importance of multilateral space in the world we’re entering into, which is more complex, multipolar, and faces huge challenges that can only be addressed effectively within that multilateral space.

Robert Glasser is the Special Representative of the UN Secretary-General for Disaster Risk Reduction. Camilla Burkot is a Research Officer at the Development Policy Centre.

Robert Glasser is the Special Representative of the UN Secretary-General for Disaster Risk Reduction.