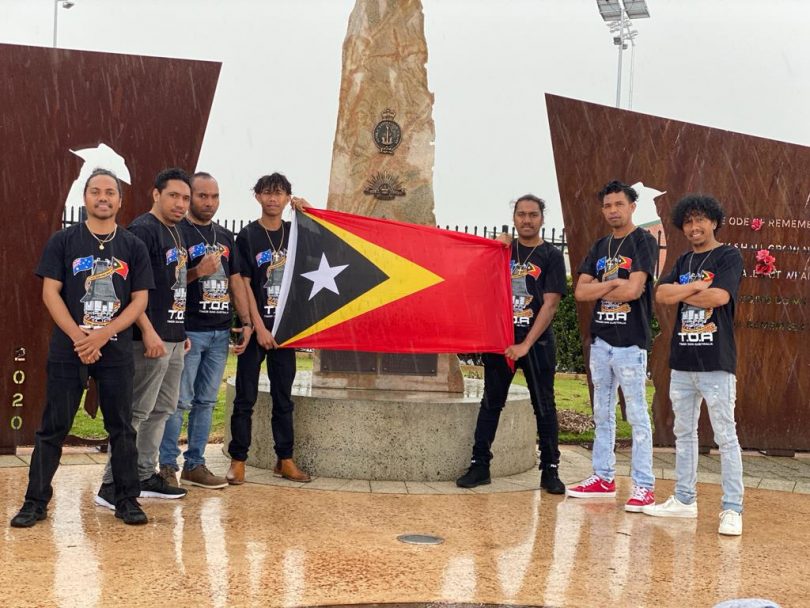 In 2018 remittances from abroad became Timor-Leste’s largest non-fossil fuel related source of income, before coffee but after aid.

With producing gas and oil fields almost dry and the development of new ones still uncertain, it seems likely that in Timor-Leste’s third decade labour sending will take on a degree of economic and social importance it has never had before.

This online seminar brings together work on this distinct and largely unanticipated new stage in the growth of Southeast Asia’s youngest nation.

How will development fuelled by money earned by Timorese workers and remitted directly Timorese households look different from that occasioned by foreign donors and local bureaucrats based in Dili? An academic panel will present three papers related to this question, followed by a participant panel which will provide first-hand insights from workers who are in or have been to Australia as part of its Seasonal Worker Programme (SWP) and Pacific Labour Scheme (PLS).

In this paper I suggest that the influence of remittances on development in Timor-Leste are best understood as emerging at the nexus of three distinct socio-economic-cultural spheres. The first of these is what I term ‘customary communalism’: a pervasive ethic in Timorese life defined by mutual aid, ritual exchange/feasting and the belief that health and fortune are tied, through the agency of watchful ancestral spirits, to one’s willingness/ability to fulfil ritual and social duties. The second is the deep influence of Indonesian models of education, enterprise and governance on Timor-Leste’s intellectual, commercial and civic life. The third is individual wage labour undertaken in the UK, South Korea and increasingly Australia. Money earned by individuals abroad is fed into interrelated, essentially communal kin networks throughout the island. Beyond immediate consumption, the grassroots development activities they facilitate (including education, improvements in housing stock, and small businesses) tend to resemble that seen in neighbouring provinces of Indonesia.

This talk explores the geographical and social impacts of remittance-sending from Australia on households in Timor-Leste. It discusses the economic and social contribution that Timorese workers in Australia make to their extended kinship networks and to the community more broadly, and implications of these contributions for Timor-Leste’s future. Drawing on fieldwork undertaken in Dili as part of my PhD, I argue that circular migration to Australia under its Seasonal Worker Programme provides an impetus for urbanisation and sustainable development in Timor-Leste, and that returned workers form an important part of an emerging middle class in Dili.

In this paper I draw selectively on the results of a survey of 70 Fataluku-Timorese labour migrants, who have spent varying periods of time working in the United Kingdom, to highlight their diverse experiences of migration and return to Timor-Leste. The survey was undertaken in late 2019, just before the onset of the global pandemic and the shutdown of national and international borders that effectively ended this remarkable chapter of what had become a very popular, two-decade long option for aspiring Timorese migrant workers. A post-COVID landscape may yet see a resumption of this livelihood pathway, but it will do so in the context of a post-Brexit landscape in the UK and the growing popularity of new labour migration options on offer in Australia. The UK migration experience offers a useful comparative perspective on the benefits and challenges of pursuing transnational labour opportunities.

Since the restoration of Timor-Leste’s independence in 2002 travelling abroad for work has emerged as a defining adventure for its 1999 generation. Intensely patriotic, they are a group who often also feel frustrated by the lack of opportunities available for themselves and their families. They are urban and often highly educated but they typically remain mindful of obligations to custom and family in their home villages. Born in a time of war and isolation, they are able to send money and words across the world with ease. In this panel four Timorese workers will share, in discussion with Gordon Peake, their thoughts on the good and the bad of travelling and working abroad. They will tell us in their own words what their experiences – spanning from the streets of Dili to the mango orchards of Australia – have taught them about the state of their rai doben (beloved land), and the ways in which those who leave it to work remain passionate about and very much invested in its future.

Jomat Tapal has an Associate Degree in Management from Bellevue College in the United States. In 2017 he worked one season on a farm in Northern Australia has part of the SWP. He currently works for the UNDP in Dili.

Pedro Lay is originally from Bobonaro in Timor-Leste. He previously studied information technology in Portugal and worked for many years in Northern Ireland. He currently works at an abattoir in Victoria with the Pacific Labour Scheme.

Simon Pedro is originally from Baucau in Timor-Leste. He has a degree in IT and worked three seasons in Australia with the SWP. Since returning to Timor-Leste he has developed and run a business raising organic chickens.

Cesarina Doutel is originally from Baucau in Timor-Leste. Between 2017 and 2020 she worked three seasons on farms in Queensland with the SWP. Since returning to Australia she has been studying at the National University of Timor-Leste.

This online seminar is free and open to the public. It will be recorded, and the recording will be available after the event on the Development Policy Centre website.