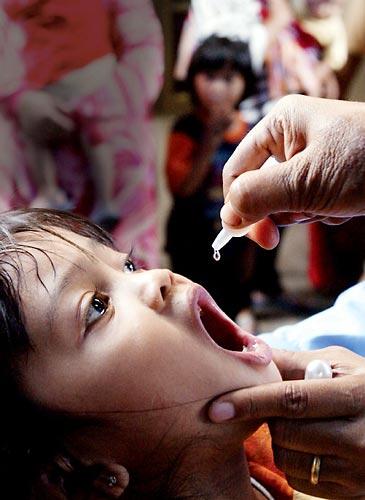 Poliomyelitis is a crippling and potentially fatal infectious disease, still striking children mainly under the age of five in countries in Asia, Africa and the Middle East. Historically, polio has been the world’s greatest cause of disability and can cause paralysis within hours that is almost always irreversible. Because there is no cure for polio, the best protection is prevention, which can be provided to children through a US$0.60 vaccine. The effort to eradicate Polio began in 1985 with the creation of PolioPlus, an initiative of Rotary International. Three years later a global effort, known as the Global Polio Eradication Initiative (GPIE) began, led by the World Health Organisation, UNICEF and the Rotary Foundation.

The global effort has seen the reduction of Polio cases globally reduce from over 350,000 in 125 countries in 1985 to 1,300 recorded cases in 20 countries in 2010, with only four countries in the world reported to have endemic cases of Polio (Nigeria, India, Pakistan and Afghanistan). Since the beginning of the effort the America’s, the Western Pacific Region (including China) and Europe have all been classified Polio-free. By 2010 around 2.5 billion children have been immunised against polio in 120 countries, sparring an estimated 5 million children from a lifetime of paralysis. The successes of the campaign have been immense, however since 2001 there has been no further eradication in annual cases despite extensive immunisation efforts, with the total cost of the initiative now reaching $9 billion, with yearly incremental costs of $1 billion going towards vaccinations.

With the cost of combating the disease continuing to grow and an apparent freeze in the progress towards eradication, the debate about the cost-viability and potential of the campaign to eradicate Polio is now becoming heated. Critics of the campaign to eradicate polio; including Dr. Donald A. Henderson, the former WHO officer who began the drive to wipe out smallpox; Richard Horton, editor of The Lancet medical journal, and Arthur L. Caplan, director of the University of Pennsylvania’s bioethics center, argue that the campaign against Polio should shift to one of containment (for more information see this NYTimes article). A shift away from eradication and a focus on aggressive vaccination towards one of containment could lead to an explosion of outbreaks in these regions and the acceptance of 100,000 to 200,000 crippled or dead children a year. Sceptics acknowledge this risk but argue that it is the price to pay for shifting the $1 billion spent towards other measure that can prevent millions of deaths from pneumonia, diarrhoea, measles, meningitis and malaria.

Proponents of the campaign, currently led by Bill Gates who has personally contributed $1.3 billion to the campaign through the Bill and Melinda Gates Foundation (tackling polio has now become Bill Gates flagship campaign for 2011), argue that the long-term net benefits of polio eradication are worth the cost. An independent study published in the leading medical journal Vaccine in November 2010 estimated the economic benefits of the (GPIE) at between US$40-50 billion based on activities from 1988 through 2035 (assuming eradication of wild polioviruses in 2012 or shortly thereafter), with low-income countries accounting for approximately 85% of the net benefits. A movement away from eradication towards a policy of containment, and the subsequent explosion of recorded cases to near that of 1985 levels in more concentrated areas, would also mean the wasting of the $9 billion that has been contributed to the cause over the past 25 years. Like Smallpox, supporters argue that the last 1% is always the hardest, but is well worthwhile in the long run.

The continuing commitment to the eradication of Polio would also help to demonstrate the investment value of foreign aid – highlighting the life-changing impact aid dollars have and emphasising the importance of increasing domestic aid contributions. A successful eradication effort would also demonstrate the potential of global collaboration and give international cooperation a massive boost. Its eradication would also be a major landmark in the fight against global diseases; marking the first time since 1979 that mankind has wiped an infectious disease off of the face of our planet.

The arguments for and against polio remain heated, however the commitment of international donors has not only remained steadfast but, under the leadership of Gates, is steadily growing. Gates and other major donors are arguing that a last big push is needed to eradicate Polio.  The GPIE estimates a funding gap of US$720 million to meet the requirements of complete polio eradication. This year alone Britain has pledged to double its US$30 million contribution to GPIE and the UAE has contributed US$100 million to the cause. The eradication of Polio will draw a line in the sand as an example of what can be achieved through a concentrated commitment of foreign aid. Australia currently has no commitments to the GPIE effort, but should this remain the case or should Australia, with its privileged position of overseeing a rapidly expanding aid budget, join the last ‘big push’ to reach this landmark achievement?

Jonathan Pryke is a Research Associate with the Development Policy Centre.