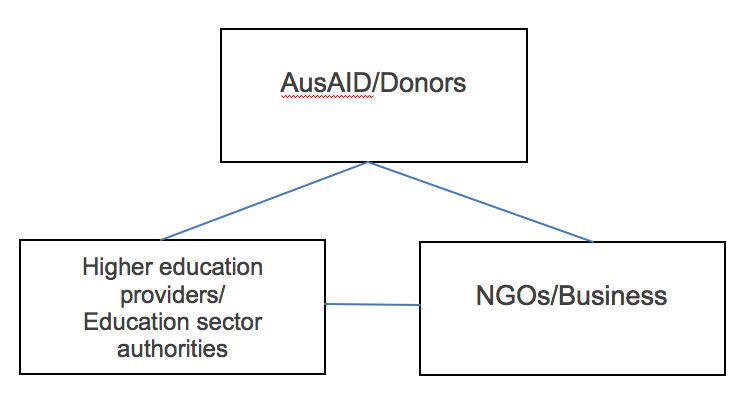 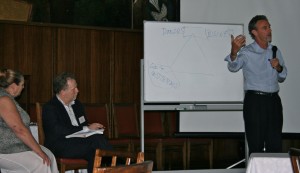 In this post on this site on 21 March 2012, Maree Tait argued persuasively that “networking is a critical mechanism for development”. This echoed a theme that emerged from the forum on aid effectiveness in education co-hosted by the Development Policy Centre and Save the Children Australia held a week earlier on 13 March. As one of the participants in that forum, I want to explore some ideas that emerged for me that resonate with the arguments Tait explored in her post.

The increased blurring of education priority issues between the developed and developing worlds was apparent in the presentations from a number of speakers at the forum. This is particularly the case in policy areas related to minority language groups and priority action programs targeted at the poorest communities.

The issue of intervention programs for the poorest communities is in a similar category. Most education authorities across Australia now have in place programs to address socio-economic disadvantage. The Commonwealth Department of Education, Employment and Workplace Relations (DEEWR), for example, has a Smarter Schools National Partnership for Low Socio-economic Status School Communities which will provide $1.5 billion over seven years to support education reform activities in low socio-economic status schools. The discourse surrounding this program, and others like it, closely resembles the language used to describe priority action areas for many education sector aid and development programs.

This blurring of the distinction between “wicked” problems facing education policy workers in both developed and developing countries lends weight to a proposition related to partnerships that I want to put forward, building both on Tait’s post and a proposal emerging from the forum I will come to shortly.

I suggest that institutional partnerships might offer an alternative, and perhaps more productive, means of technical assistance. Such partnerships would be based on an acknowledgement that, while contexts may differ profoundly, the core issues that many education authorities across the world face in attempting to deliver effective education services to all students are very similar. This might lend an element of humility and mutual respect too often missing from the “expert-novice” relationship that so often characterises the predominant existing paradigm of the engagement of individual consultants. As Tait notes in her post, “[n]etworks are good at accommodating change, because they are based on cooperation and mutual understanding”. While she made this observation in relation to the evolving nature of the Global Development Learning Network (GDLN), her observation may well be apposite in relation to partnerships between education authorities in developed and developing countries. Despite its criticism, the Independent Review noted that “it is important to recognise that technical assistance can have major benefits in the right circumstances” (p. 20). A new form of institutional partnerships might be one way to better realise these benefits.

Institution-to-institution arrangements may well provide a framework to overcome the kind of issues that so often derail programs that rely on individual consultants, such as a lack of an effective rapport and working relationship between the consultant and key government officials, the decision taken by a consultant to take on a new role, and the intermittent nature of a relationship defined by short-term inputs.

Both the provision and maintenance of such institutional arrangements would require a new form of networking within the Australian education sector in relation to delivery of aid and development services. One step towards this might be the establishment of a simple network, such as the one illustrated below which I (consolidating the views of a number of participants) proposed at the end of the forum. A possible acronym for such a network (a necessity in this age of the acronym) might be TEPID: the Tripartite Education Partnership for International Development (for any readers concerned about the potential mixed messaging of this acronym, think of it as reviving the tradition of calling redheads Bluey).

The drivers for a TEPID-type partnership or network became apparent in the course of the forum: (i) missed opportunities for linking Australian education authorities with their counterparts in developing countries; (ii) the need for greater awareness on the part of both donors of the research output of higher education providers in the field of aid and development in the education sector; and (iii) the limited awareness on the part of NGOs of the work being undertaken by business in developing markets.

It was suggested that as an alternative to the usual structure of face-to-face meetings, TEPID might be a virtual network, operating in a structured but flexible way using new cloud-based digital technologies. As a start, one of the organisations represented at the forum, the Australian Council for Educational Research (ACER), might be commissioned to establish a clearing-house regular listing of journal articles related to education sector aid and development.

I hope the dialogue begun at the forum can continue to explore these kind of ideas.

David Howes is the General Manager, Curriculum Division of the Victorian Curriculum and Assessment Authority. He was a speaker in the closing session of  the Education Effectiveness and Collaboration Forum held at the Australian National University on 13 March. The program and keynote presentations are available here. A recording of the day’s proceedings is available here.

David Howes is the General Manager, Curriculum Division of the Victorian Curriculum and Assessment Authority. He was a speaker in the closing session of the Education Effectiveness and Collaboration Forum held at the Australian National University on 13 March.