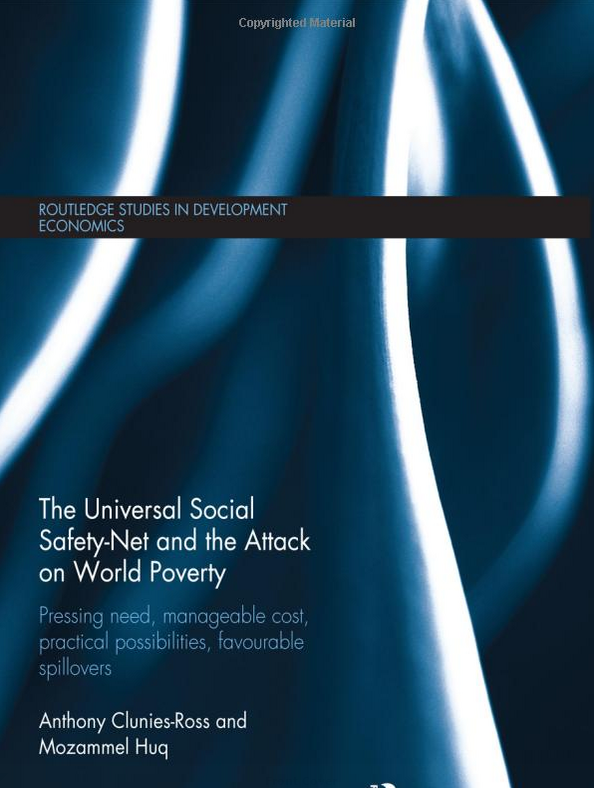 The idea of expecting countries to establish social protection schemes so as to comprehensively increase disposable incomes above severe poverty levels sounds utopian. The notion may well seem like a naïve bright idea thought up by day-dreamers.

Even a moment’s thought suggests immense difficulties. Wouldn’t the cost be enormous? Could poor countries afford such costs, or would this be just another drain on aid? How could payments be targeted to the severely impoverished? Wouldn’t fraud in the disbursement of funds be a major problem? Is lifting disposable incomes above a minimum equivalent of $US 1.25 a day really sufficient to eliminate severe poverty? Mightn’t the availability of a universal automatic safety-net interfere with incentives to work?

Anthony Clunies-Ross and Mozammel Huq carefully discuss each of these potential impediments and show that attempts are already being made to address them all in some countries. A particularly striking feature of this book is the detailed description, examination and assessment of contemporary programs. The authors accurately conclude that:

What was scarcely considered a serious project as little as 20 years ago is now – quietly and almost unnoticed among the affluent segment of the earth’s people – becoming a matter of practical policy and politics. (p 173)

The book is logically structured and lucidly and succinctly argued. It begins with the case for a safety-net, a floor below which everyone’s disposable income will not be allowed to fall. Setting such a floor for the people of a country has to be the responsibility of that country’s government, though civil society, other governments, multilateral institutions and foundations may also make important contributions. This involves moving beyond relying only on economic growth as the receipt for poverty reduction to acknowledging that re-distributional policies directed at increasing incomes of the poor are a necessary complement.

The authors regard a floor to disposable income as a requirement for eliminating extreme poverty, but acknowledge that an adequate system of social protection must also include merit goods of education and health services and other public goods.

Establishment of such a floor is also a principle of collaborative human life:

If we believe that our common status as human persons implies an acceptance of responsibility for each other’s material welfare – and that this demands at least some minimum provision for everyone of access to food and a few comparable necessities – then our responsibility, insofar as it may be capable of fulfilment, extends to providing, country by country but universally, a social safety-net. (p 7)

The net direct and indirect benefits of guaranteeing a minimum cash income are clearly described. For example, increasing access to food is vital not only for survival but also for children’s healthy growth, which is a necessity for their capacity as adults to contribute to society and production as well as to live fulfilled lives.

Another feature of the book is the sophisticated calculation of the total annual poverty gap, the amount required to bring all those below the poverty line up to it. This is made for each country and the result totaled to show the global cost of eliminating severe poverty. The total comes to $81.5 billion in 2005, which is a surprisingly low figure, less than two thirds of current official development assistance from Western governments. It would have represented about 0.2 per cent of world gross income (GNI) in 2005. Much of such expenditure is already made by developing countries themselves. The purpose of the calculations is to show that the cost of a global commitment to a universal social safety-net would clearly involve manageable cost.

The difficulties of implementing the schemes are greater than those of raising the revenue to pay for them. The administrative complexities include: identifying the people to be paid; setting the amounts to be paid to them; and managing the transfers. Several mechanisms are being tried. Developed country welfare state mechanisms are too complex and bureaucratic. Second-best approaches include self-targeting through paid work on public projects; and targeting involving nutritional status, demographic status – children, the elderly, pregnant and lactating women and people with disabilities – and geographic or community targeting.

Empirical evidence from countries such as Armenia, Brazil, rural Ethiopia, India and Mexico shows that any anti-work incentives do not exist, do not matter or can be avoided (p 61). Incompetence and/or corruption in administration are more serious potential defects and the book discusses various means of continually maintaining pressure for efficient and honest management. Amongst the most powerful are publicity and punishment of incompetence and fraud. India is highly ambitiously introducing a ‘unique identity’ scheme, which will provide each person with a biometric identity record.

As with any new government outlay, financing social safety-net schemes can be through reallocation of expenditure, new taxes, ODA and borrowing. The most desirable is reallocation of funds used for general energy or food subsidies which are highly costly and which subsidize the rich as well as the poor because they are unable to target the severely impoverished. Growth-generated increases in revenue are also likely to be a potential source of funding to schemes introduced over time.

Conditional cash transfers have become a widespread form of social-safety net in Latin America. PROGRESA, later called Oportunidades in Mexico, makes regular cash payments to poor families with children on condition that the children attend school and are immunized. Bolsa Familia in Brazil is similar. These programs and others like them in Colombia, Nicaragua and some other countries have been found to be successful means of increasing food consumption and alleviating poverty. There have been positive increases in school attendance and the prevalence of child labour has fallen. However, they are not comprehensively available to all poor households.

The Indian approach of making employment guarantees involves paying people enough to keep them from extreme poverty, provided they earn the benefit through productive work. The Rural Employment Guarantee Act of 2005 set up the framework under which applicants must be given up to 100 days of unskilled manual work paid at no less than the legal minimum wage for agricultural labourers. Wages are the same for women and men and at least a third of those employed must be women. Estimates of the cost of the scheme vary between 0.6 and 1.0 per cent of GDP. About a third of rural households appear to have received some additional income as a result of the scheme.

Paying for health care using contributory and non-contributory insurance devices so as to avoid risking destitution through unforseen medical expenses is also discussed in some detail, and the Thai scheme is used as an example of effective practice.

Microfinance is another quite distinct method of reducing poverty by addressing financial exclusion. Various schemes are described, criticisms of them summarized, and careful evaluations made. One conclusion is that various NGO microcredit schemes in Bangladesh have contributed to improving the lives of tens of millions of poor people.

The book makes clear that a fundamental change is under way – ‘as if tectonic plates are moving’. The UN General Assembly Summit in September 2010 considered social protection to be among the successful approaches for reducing poverty and stated that ‘promoting universal access to social services and providing social protection floors can make an important contribution to consolidating and achieving further development gains’.

The adoption by the International Labour Conference in 2012 of a Recommendation Concerning National Floors of Social Protection demonstrates strong international agreement to the principles of a safety-net. Clause 4 says that ‘Members should, in accordance with national circumstances, establish as quickly as possible and maintain their social protection floors comprising basic social security guarantees’.

The way is being led by the largest middle income countries – China, India, Brazil, Mexico and Indonesia – through the gradual, piecemeal introduction of various types of safety-net. The question is whether smaller, poor countries and wealthier countries that could support them will do so. This book is a major contribution to building such support.

It is striking that yet again Anthony Clunies-Ross is at the forefront in a drive for equitable change. He was so in 1963 when he wrote the booklet One Percent which led the way towards the UN target for official development assistance. He led preparation of the book Alternative Strategies for Papua New Guinea. With Ross Garnaut he was one of the first advocates for a resource rent tax. His leadership in writing the wise, reflective textbook Development Economics published in 2009 is another of many examples of his thoughtful initiative in articulating rigorous, imaginative analysis of unresolved problems and new ideas for approaching them. The Universal Safety-Net will be another authoritative source of information and ideas for practitioners and scholars seeking more effective means for eliminating severe poverty.

John Langmore was the Director of the Division for Social Policy and Development in the UN Secretariat between 1997 and 2001, and the Representative for the ILO to the UN in 2002 and 2003. He is now a Professorial Fellow at the University of Melbourne.