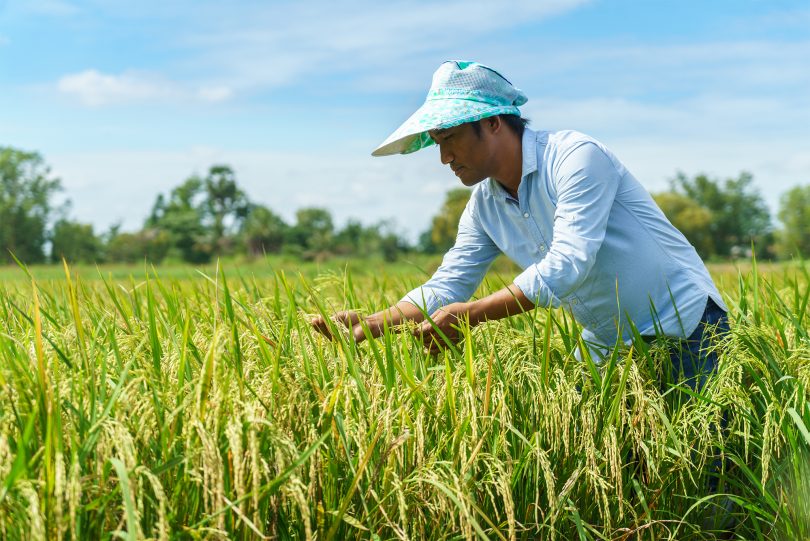 My experience over the past decade has shown that the business enabling environment is intrinsic to achieving systemic change in markets.

The program that has most influenced my understanding of this is the Australian Government-funded Cambodia Agricultural Value Chain Program (CAVAC). This year, Cambodia became one of the first developing countries to standardise labelling for the safe and effective use of chemical pesticides. This seemingly simple regulatory change is the culmination of many years of effort by CAVAC to improve the market practice and legal framework for the sale and use of chemical pesticides in Cambodia.

How was this achieved?

CAVAC started in 2010 with a mandate to increase farmers’ incomes, a key aspect of which was improving rice productivity. At the time, rice farmers were losing up to half their crop yields to pests. The integrated pest management approach encouraged by the Royal Government of Cambodia was not being followed and an estimated 93 per cent of farmers were using chemical pesticides.

An uncertain regulatory environment meant that most retailers worked in a ‘grey’ market; despite a new law for pesticides, there was no supporting regulation to allow companies to comply. And lack of national guidelines and textbooks meant there were no credible sources of information on chemical pest control. Farmers were buying products of dubious quality and using them indiscriminately and unsafely.

CAVAC’s early attempts to engage with distributors to improve the products and services they provided to farmers failed as they were unwilling to highlight their work in the sector. These companies survived by working under the radar and, as such, deemed it too risky to partner with CAVAC.

This made it clear to us that change in the sector could only be achieved through altering the government’s perceptions around chemical pest control and ensuring that regulations and mechanisms were in place to allow retailers to operate more openly. In short, CAVAC needed to bring about a change in the business enabling environment in order to effectively engage with the private sector in this market.

The process was not linear, nor was it simple. The first few years were marked by trial and error and painstaking efforts to build a body of evidence to support change and identify key individuals in the private sector, government and academia who could influence perceptions. We consistently went back to the drawing board to learn from our failures.

CAVAC’s broad portfolio of work meant that the success or failure of the whole program did not depend on the pesticides work alone. This gave the team freedom to move slowly and deliberately on pesticides.

What we learned from CAVAC

Conducting a market analysis at the beginning of a program is without doubt an important foundation for strategy development. But, markets do change and an initial analysis is unlikely to capture everything. Strategies need to be regularly updated as new information comes to light, as planned work flounders, or as the unexpected opportunity arises.

CAVAC’s initial market analysis confirmed that pest management needed to be a major part of our strategy. From this analysis we understood that significant improvements could be made by partnering with private sector actors already working in the area.  However, at this stage we did not fully understand the potential risks companies faced by working with a large donor program; most companies operated in a legal ‘grey zone,’ working under the radar. Our first private partner disappeared (ghosted us, I believe is the phrase) as soon as the contract was signed. And our next partner was only able to work with us because they were well-established. This highlighted to CAVAC the substantial work needed to enable the business environment, as significant changes in the pesticide market could only be achieved in a more open and transparent environment.

One of the most important lessons we learned is the need to bring in the right mix of people when trying to support business enabling work. This, of course, requires resourcing. Market system development programs have traditionally sought a particular profile of staff: well-educated, usually young, open-minded and able to think critically.

These may not always be the right people to work effectively on the business enabling environment; their lack of experience can hamper their ability to engage senior government. Much of the success of CAVAC in this market is due to the experience and technical proficiency of the national manager, who was able to ensure we could credibly and strategically engage with both government and private sector partners.

We know that the process for change takes time, and success is more often than not due to adaptability; the ability to respond to opportunities and learn from failure. CAVAC was designed to be a program that could change. Flexibility was built in through a near real-time monitoring system that allowed activities to be adjusted based on changing conditions and evidence.

Our work in this market included private sector partnerships, investments into research to build an evidence base, support to government partners for guideline development, technical advice, and support to universities, to name a few. None of these activities were expensive (and work with the private sector was always co-funded), but they were all critical in changing the market.

Identifying and working with individuals who have the clout to influence change is critical for success. Programs need to identify these key influencers across the sector, for example within the ministry, private sector, research organisations and universities, the media, and other donor programs.

However, it is equally important to identify key supporters; they may not yet be influencers but they can help identify opportunities – plus, who knows what the future holds! Over time, CAVAC cultivated champions within government, the private sector and academia, and worked with them to communicate ideas, change attitudes, and improve regulations and guidelines.

CAVAC’s work is reflected in the market with farmers spraying less often, and practicing less preventative and more curative spraying habits, reducing overall pesticide use, as demonstrated by farmer surveys. This is a strong indicator of transition towards knowledge-based pest management.

Companies and retailers have moved out of the ‘grey’ zone and are working in an open market. Agronomy students now have access to a national textbook and classes on chemical pest control. National and provincial governments have clearer registration processes, guidelines and approval mechanisms.

Our work in pesticides has culminated in the new labelling regulations, heralding a new phase for the sector. These changes – including ongoing work with our private partners to improve the quality of their products and services – mean that farmers today can access better products and advice on the correct and safe use of pesticides.

For more see the CAVAC case study, the first in a series of Cardno papers looking at how aid programs can support policy and regulatory reform.

Renee is Cardno's Global Lead on market-driven approaches to development, and a Principal and Program Director at Cardno. She has worked on MSD programs across a number of sectors and countries.