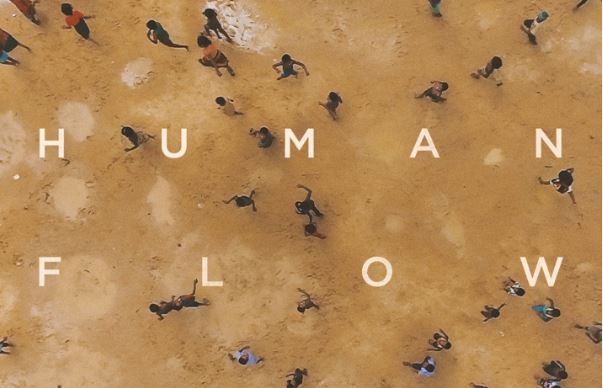 The sheer length of Ai Wei Wei’s documentary on refugees and the global humanitarian crisis – 140 minutes – means that it is not for the faint-hearted. Human Flow is long because it combines stunning zooms (often drone-mounted) and action shots (often at sea) with close-up encounters of asylum-seekers – several of whom are reduced to tears. On top of that, the film strives to be comprehensive – with footage from Asia, Africa and Latin America in addition to its main focus on the Middle East and Europe – and rigorous, with interviews with experts and authorities.

It’s an achievement that, despite its length, Human Flow retains the viewer’s attention throughout – or at least it did mine. That said, it certainly could have done with a good edit. The brief coverage of the Rohingya crisis and of Gaza I found particularly confusing, and both would have been better omitted. At times the film goes beyond refugees to comment on migration more generally, especially at the end when it visits the Mexico-US border. By this stage, all cross-border movement of people seems to have become problematic, whereas in fact migration has been in many ways a great post-war success.

Particularly irritating is the footage of the director himself: Ai Wei Wei having his hair cut, or buying food, or pretending to swap passports with a Syrian, or (repeatedly) of him filming on his smart phone. Before this film, I knew of Ai Wei Wei as an artist and dissident. I wasn’t aware of his long-standing interest in refugees, or of his career as a film maker. It’s great that he has made this movie, but at times it is just too much about him.

Europe emerges as the villain of the piece. The movie was shot in 2016 when Europe closed its doors to asylum seekers, not in 2015, when it opened them. Instead of shots of refugees moving through open borders, we see them stranded at Greece’s border, and eventually turned back. There is a brief segment on refugee camps in Berlin, but even here Europe comes off badly, with complaints of boredom from refugees and impressions of crowding. This seems rather unfair. After all, Europe did take in one million refugees. Not as many as front-line countries such as Lebanon, Jordon and Turkey, but still an impressive exercise in generosity.

Manus and Nauru don’t rate a mention, which is surprising, because you’d think that if you wanted to study inhumanity to asylum seekers Australia’s off-shore processing would be international exhibit number one.

Also missing from the film are the countries that won’t go anywhere near the refugee problem, such as Japan and Ai Wei Wei’s own China. Yet if we are serious about solutions, we can’t only press those countries asylum seekers can reach to take them. The incentive for such countries is in fact to make it as hard as possible for them to be reached, which is exactly what Europe, and Australia, have done. We can deplore this, but then we should also deplore even more a lack of generosity on the part of those countries who can afford to accept refugees without having to worry about incentive effects.

For all its faults, Human Flow certainly succeeds in bearing powerful witness to the multiple crises unfolding around the world, and to the hazardous journeys people take to escape them. There is the Syrian father who breaks down while talking of his family members who drowned attempting a sea-crossing. There is the Afghan mother in Greece who is told on camera that the Greek border has been closed, and takes it in her stride. There are the children, some traumitised, others joyful. There are the refugee camps in Kenya and in Lebanon that have by now become permanent fixtures and homes to generations.

That a solution to the current global humanitarian crisis is beyond our collective effort doesn’t mean that we should shut it out. There is certainly plenty we can do, as individuals and as countries. Watching Ai Wei Wei’s film is one way to let that crisis into your head.

Human Flow is currently showing in Australian cinemas, including in Canberra at Palace Electric Cinema. Companion House is also showing the movie as a fundraiser on Monday April 16 at 6:30pm. Tickets here.