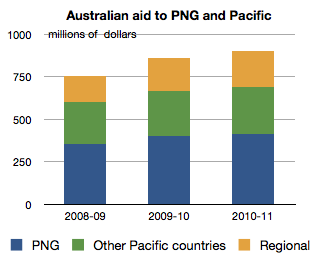 The Pacific region has long been a major focus of Australia’s aid program. As Australia doubles it’s global aid program to $8-9 billion in 2015-16, what are the implications for the Pacific? How can aid support closer economic integration?

An experienced trans-pacific panel discussed these questions at a recent conference on ‘Doubling Australian Aid‘ hosted by the Development Policy Centre at the Crawford School. Members of the Independent Review of Aid Effectiveness panel attended the conference, so it will be interesting to see what the review recommends on aid to the Pacific.

Australia has traditionally targeted aid to its neighbours

Richard Marles, Parliamentary Secretary for the Pacific, set the scene for the discussion by highlighting the importance of the Pacific to Australia. This significance is reflected in the volume of aid given to the region: according to an estimate in the 2010-11 budget $1 billion was allocated this year to PNG and the Pacific.

Marles also identified the key reforms introduced to the relationship in the past few years such as the Cairn’s Compact, designed to improve the coordination and use of development resources, and the Pacific Partnerships for Development, which reflect a commitment to more rapid progress toward development goals.

Using regression analysis to decipher patterns in Australian aid, Professor Satish Chand of UNSW at ADFA showed that the three largest recipients of Australian aid have been Papua New Guinea, the Solomon Islands and Indonesia. Based on historic patterns, Chand predicted aid to the region would increase in the future.

Aid to the Pacific is not without critics, but it has an important role to play

Manjula Luthria, Senior Economist at the World Bank, acknowledged a range of views on the effectiveness of aid, particularly in the Pacific, the most aid dependent region in the world. Aid professionals and economists have disparaged aid to the region, highlighting issues such as moral hazard, Dutch Disease and institutional corrosion. Some have called for aid to be cut back in order to compel the Pacific to stand on its own feet.

In response to this view, Luthria argued for a shift in the modalities of aid delivery rather than a decrease in aid. Perhaps Australia needs to move away from the notion of foreign aid as a temporary activity with an exit strategy once capacity is built up? Instead, she believes aid has a role to play in integrating the Pacific into the global economy.

Closer economic integration is the future

At present, economic advantage is skewed toward conglomerations and economic hubs. The real problem for the Pacific is not a capital constraint that requires aid and remittances but geography and the small size of the Pacific countries.

The Pacific lies on the periphery. The only way to achieve prosperity is to reduce economic distance and the economic distortions that generate this distance.  For Pacific countries to benefit from economies of scale and economic conglomeration they need to be integrated into large, rich country labor markets.

Professor John Gibson raised questions as to whether or not migration reform might make more difference to the development prospects of Pacific countries than doubling aid. He argued that migration restrictions are the largest distortion in world economies and that gains from the liberalisation of goods trade are tiny compared to those from even novice expansions of global migration.

A single market which enables labor migration certainly appears to be a better way to lower poverty and achieve sustainable development in the Pacific. Satich Chand showed that an unskilled laborer in Australia earns in one hour what an unskilled laborer in the Solomon Islands earns in a week. John Gibson found that Tongans settling in New Zealand receive an immediate increase in their income of 50 per cent.

As the main economic hub in the Pacific region, Australia must be central to integration. Australian aid may need to increase in the region to help meet the substantial cost of linking an economic periphery into an economic hub. The panelists agreed that aid is central to: reducing economic distance, removing distortions, aligning institutions and pursuing integration.

Danielle Hay is a research assistant with the Development Policy Centre.