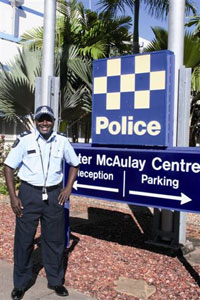 There needs to be a genuine discussion of scholarships as an aid instrument and how to improve their effectiveness. Markus Mannheim’s story on Development dollars are too precious to waste moves the aid debate forwards from fraud to development effectiveness, arguing that unless scholarships can be shown to reduce poverty they should not be counted as aid. This is an interesting discussion to have, but his analysis of scholarships is incomplete and like other recent stories tends to sensationalise the issues.

It is good to see that more journalists are accessing aid reports through the Freedom of Information Act. The ‘confidential’ and ‘internal’ report on the effectiveness of scholarships (2008 and 2009) that forms the basis Mannheim’s story is now available on the AusAID website following an FoI request. (And according to the AusAID’s draft Agency Information Plan, we can expect more of this kind of information to be routinely shared–a very welcome move.)

A story about the effectiveness of scholarships would be more persuasive though if it made reference to AusAID’s most recent assessment of scholarships programs contained in this 2010 update on scholarships (which is publicly available on the AusAID website.)

It would also be more persuasive if it were based on the findings of a more recent audit or aid review. The story preempts an ongoing audit of Australian support for tertiary education that is due to be tabled in the Autumn sitting of Parliament, and the Independent Aid Review, chaired by Sandy Hollway, that is due to report back this week on how to improve the effectiveness of Australian aid, presumably including scholarships.

We don’t yet know the findings of the ANAO audit report or the Aid Review, but in the meantime, AusAID’s own 2010 update report on scholarships is worth reading to get a better understanding of the objectives of the scholarships program, patterns and trends in funding, achievements, and the challenge of improving monitoring and evaluation. 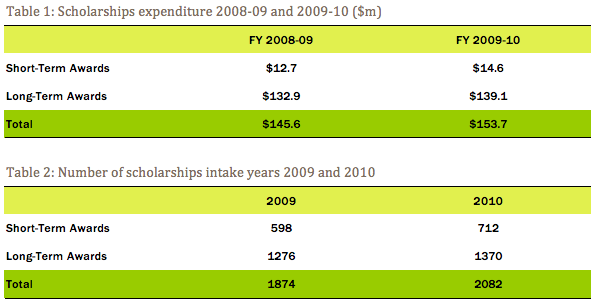 Monitoring and evaluating the impact of scholarships is not easy. The Mannheim story refers to a 2008 and 2009 study that is available on AusAID’s website. As mentioned above we don’t yet know the findings of the audit and Aid Review, but M&E seems to be an area where AusAID has made good progress. The 1999 audit, the 2007 ARDE, 2008-09 study were all critical of AusAID’s systems for tracking the effectiveness of scholarships. Since then, notable progress has been made in strengthening systems. According to AusAID’s 2010 update:

It seems then that there is rich array of evidence and analysis for the Aid Review to draw on to assess the effectiveness of the Australia’s scholarships program, including looking at the geographical targeting and need for scholarships, their cost effectiveness and ongoing monitoring and evaluation.

We need a genuine discussion on the future of the aid program. Markus Mannheim has moved the debate forward from fraud to development effectiveness, but not delivered a balanced analysis of the scholarship program. For now I will reserve judgement and look forward to reading a more informed analysis in the ANAO and Aid Review reports.

Matt Morris is the Deputy Director of the Development Policy Centre and a Research Fellow at ANU’s Crawford School.