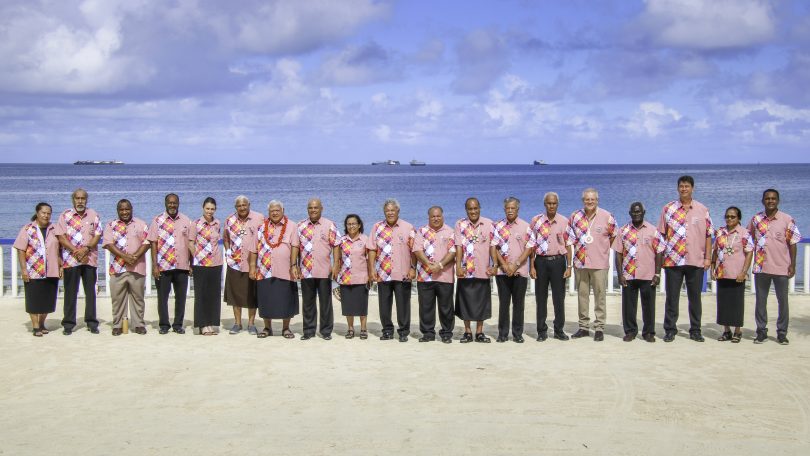 When he announced the new AUKUS security partnership, Prime Minister Morrison claimed that it will “enhance our contribution to our growing network of partnerships in the Indo-Pacific region”, including “our dear Pacific family”. It won’t.

Initial Pacific responses to the AUKUS security partnership note that it undermines the Pacific community’s deep commitment to keeping the Pacific nuclear-free. Kiribati President Taneti Maamau said that the development of nuclear submarines puts the region at risk, and raises some troubling memories. “Our people were victims of nuclear testing… we still have trauma… with that in mind, with anything to do with nuclear, we thought it would be a courtesy to raise it, to discuss it with your neighbours”, he said.

It is true that Australia’s new submarines will not be nuclear-armed, and therefore not in contravention of the South Pacific Nuclear Free Zone Treaty. But this misses the point that the shared and deeply felt Pacific commitment to a nuclear-free region goes well beyond the weapons prohibitions listed in the treaty.

Pacific islanders believe passionately in a broader concept of a nuclear-free Pacific. This derives from their lived experience of being used as the “proving grounds” for nuclear weapons testing from the 1940s to the 1990s. The explosion of hundreds of nuclear devices by France, Britain and the United States involved the destruction of communities, forced migration, and created widespread health effects in surrounding populations. It has made some atolls uninhabitable, and destroyed livelihoods based on lagoon fishing.

It would also be a mistake for Australia to dismiss such concerns on the basis of claims that the nuclear reactors that propel the submarines are perfectly safe. The lived experience of the Pacific is that such assurances about the safety of nuclear power should never be believed. Such assurances were given to Pacific islanders from Bikini, Enewetak, French Polynesia, and Christmas Island. In each case they proved to be false.

This is why the Pacific is acting together to raise concerns about proposed dumping of nuclear wastes from Fukushima, as it did in relation to past Japanese proposals to dump radioactive wastes in the Pacific; and why the Pacific Islands Forum has “called on the United States Government to increase its monitoring [of nuclear storage at Runit atoll] and to address health consequences related to the nuclear testing programme.”

Moreover, the danger of a submarine accident is real. In 2005, a US nuclear attack submarine, USS San Francisco, crashed into an uncharted sea mount in the waters of the Caroline Islands, part of the Federated States of Micronesia. Although there was major damage to the front of the boat and to the crew, the crash, remarkably, did not damage the nuclear reactor. There have also been accidents outside the Pacific islands region, most recently in October 2021, involving USS Connecticut in the South China Sea; but also the loss with all hands of the nuclear-powered USS Scorpion in the Atlantic in May 1968.

While the public commentary within Australia, and the Pacific response to AUKUS, have focused on the Australian acquisition of nuclear submarines between 2040 and 2060, the more worrying threat to a nuclear-free Pacific in the next two decades comes from the fundamental shift in Australian–American defence relations, announced as an accompaniment to AUKUS. The Australia–US Ministerial Consultations (AUSMIN) joint statement, issued in the same week as the AUKUS announcement, included an agreement that Australia will establish “a combined logistics, sustainment, and maintenance enterprise to support high end warfighting and combined military operations in the region.”

Defence Minister Dutton explained that if the new agreed arrangement “includes basing, and includes storage of different ordnances, I think that is in Australia’s best interests.” Such basing for US submarines and bombers in support of “high end warfighting” would seem to necessarily imply the presence of nuclear weapons, although the official response would be that this cannot be confirmed or denied.

This therefore raises the very real possibility of a more direct and imminent contravention of the South Pacific Nuclear Free Zone prohibitions, under article 5 of the Rarotonga treaty, on the stationing of nuclear weapons within the zone. At the very least, this would require Australia to notify the Secretary-General of the Pacific Islands Forum of these developments, under article 9.

This broader shift in Australian defence policy associated with AUKUS also threatens to undermine another strongly held shared commitment of the Pacific family – that regional security is best promoted through a “friends to all” approach, and that great power rivalry should be excluded from the region. A number of commentators have seen this Australian policy change as fundamental – as a “crossing of the rubicon”, as a revision of Australia’s role “from deputy sheriff to 51st state”, and as Australia “becoming a major US military base for possible military action against China.”

By contrast, the Pacific family, with the possible exception of Palau, endorses a “friends to all” approach, valuing their economic relations with China alongside their close relations with western countries. They do not want to be aligned with security pacts aimed at containing China, and are resistant to the idea of joining the Indo-Pacific strategy promoted by Washington, Canberra and Tokyo.

They have promoted their own view of regional security, captured in the 2018 Boe Declaration on Regional Security (to which Australia is a signatory). The Boe Declaration pointedly emphasises a broad concept of security, that includes human security, humanitarian assistance, environmental security, and regional cooperation, in building resilience to disasters and climate change.

The Pacific Islands Forum members advocate a Blue Pacific strategy as the unifying narrative for the regional community. This defines a Pacific islands region with its own priorities and purposes, in contrast to the dominant Indo-Pacific security narrative endorsed by western partners.

The Australian Government’s undermining of these core commitments of the Pacific community has been done without consultation. Presenting this fait accompli as a contribution to “our dear Pacific family” only adds insult to injury. The last 50 years of Pacific diplomacy has been the story of Pacific island leaders asserting the rights of Pacific societies against the assumed right of metropolitan powers, to determine what happens in the Pacific islands region. At the very least, they demand that relationships within the Pacific family be conducted on an equal, open and respectful basis.

Greg Fry is Honorary Associate Professor in the Coral Bell School of Asia and Pacific Affairs at the Australian National University. He is the author of Framing the Islands: Power and Diplomatic Agency in Pacific Regionalism, ANU Press, 2019; and co-editor (with Sandra Tarte) of The New Pacific Diplomacy, ANU Press, 2015.