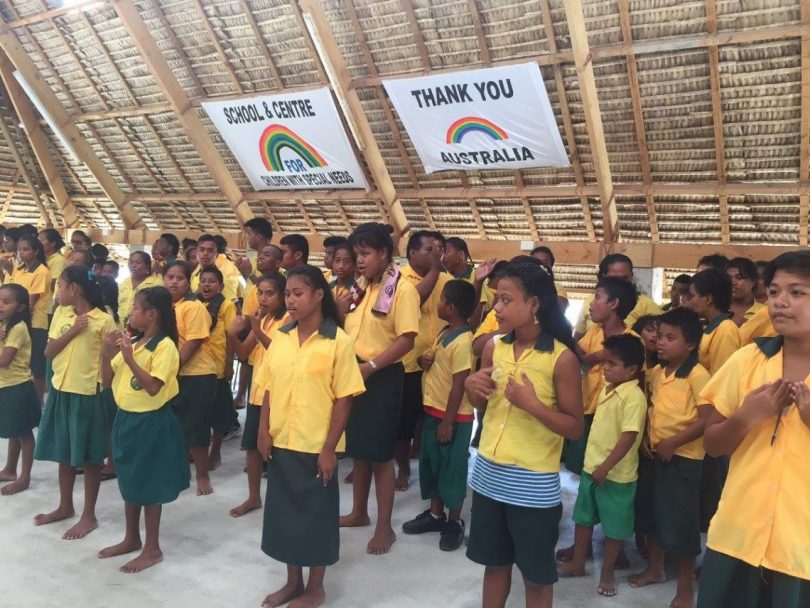 In the past decade, Australia has placed a strong emphasis in its aid program on disability inclusion and equity in education. This is commendable, but how does this play out on the ground? Are the initiatives introduced through Australian aid sustainable?

My recently published Asia and the Pacific Policy Studies article “Dependency on Australian aid and the introduction of inclusive education initiatives in Kiribati” attempts to answer these questions. I turned to Kiribati to answer the questions because I’d been a volunteer there twice, working on inclusive education in 2013 and in 2016 (funded by the Australian Government’s Volunteers for International Development Program).

For those who don’t know, the Republic of Kiribati is a small island nation centrally located in the Pacific Ocean. The country’s 32 atolls straddle the equator and extend across a distance of 3,900 kilometres east to west. Kiribati is classified as a least developed nation. It’s also one of the most aid-dependent countries in the world. Australian aid comprises about 20 per cent of total official development assistance to Kiribati.

I examined relevant documents but also spent an extended period talking to those charged with the delivery of Australian aid for inclusive education (both Australian aid government officials and contractors and other key stakeholders including Kiribati Ministry of Education administrators, school executives, and a representative of a disabled persons organisation).

Overall, the interviews revealed that without Australian aid programs it was unlikely that the inclusive education initiatives, such as the development of the Kiribati Inclusive Education Policy, would have occurred. As one respondent said to me: “Because inclusive education is new to Kiribati I think that in the past the government did not see the importance of those people [with disabilities] because they have less knowledge and understanding of human rights.”

Financial concerns were seen as a major barrier. “When we started to talk about inclusive education and the implications, especially financial, that was a challenge for the Ministry. It was a worry.” Inclusive education initiatives would be an additional expense for an already under-resourced education system without funding through Australian aid.

There is definitely a conflict between Australian imposed values of disability inclusion and negative attitudes towards disability within the Kiribati community. On the one hand, it may be argued that Australian aid helps broaden the view of the Kiribati community to incorporate universal human rights and practices. Cultures that have different views can be shown alternatives which may be then internalised into their own cultural perspectives. On the other hand, this situation may create a mindset that makes genuine local ownership of inclusive education difficult to achieve. Dependency on external influence may be accompanied by a discounting of local ideas as inferior.

Respondents, while worried about the future, were positive about the changes. One interviewee told me that the Australian aid initiatives had “built our awareness and opened our mind and hearts. We are very grateful that new ideas are introduced to Kiribati because Kiribati is not staying as it is but changed. So how can we cope with changes if we do not have support from others? I think foreign aid ideas are needed for us to go in the right direction.” Another said simply: “We must thank Australia because it is the only program which is dealing with this kind of issue in Kiribati.”

Even a 5–10 year timeframe for handover may be optimistic, with the independent evaluation report on the Kiribati Education Improvement Program noting that “broader traction with regard to inclusive education across all schools and Ministry of Education appears nascent”.

As often seems to be the case with aid, nothing is simple. As someone whose career has been dedicated to the education of those with disabilities, both in Australia and more recently in Kiribati and the Maldives, I am of course delighted that Australia has taken up this cause. At the same time, without domestic ownership it is hard to be confident that these initiatives will take root and be sustainable. Aid dependency is often thought to be a bad thing, but in this case the Australian aid program is supporting a human rights issue of access and equity in education. However, with evidence of only limited attitudinal change to date, dependency on Australian aid will need to continue well into the future for inclusive education initiatives to be sustained in Kiribati.

This article is published in partnership with Policy Forum. It is based on the author’s article in the Asia and the Pacific Policy Studies journal, “Dependency on Australian aid and the introduction of inclusive education initiatives in Kiribati”. All articles in the journal are free to read and download.

Rodney Yates has had a long career in regular and special education as a teacher of students with learning and intellectual disabilities, as a school psychologist, and as a school principal. His PhD doctorate examined the role of Australian aid in the introduction and sustainability of inclusive education initiatives in the Republic of Kiribati.