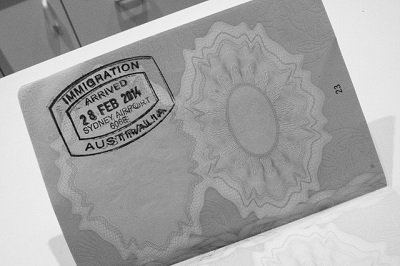 Many factors underpin migration outcomes in Australia such as economic trends and visa policy norms. One factor difficult to pin down with precision is public opinion and political support. You only need to look at asylum policy to see how public opinion can shape migration policies.

The Australian Election Study is a useful source of evidence to explore attitudes to immigration, a rich trove of data gathered in the wake of each Federal election. A recent report by ANU academics Dr Sarah Cameron and Professor Ian McAllister, “Trends in Australian Political Opinion: Results from the Australian Election Study 1987-2016”, covers a range of themes and along the way provides a number of important insights into public opinion on Australian immigration.

In 2016, 46 per cent of respondents said immigration was ‘extremely important’ when deciding how to vote. To put this number in perspective, it’s a higher number than taxation but lower than education and Medicare. Yet when asked to name the single most important topic, only four per cent nominated immigration, equal last with global warming from a list of the top 10 issues and a long way from health and Medicare (24%) or management of the economy (20%). This may explain why immigration policy debates flew under the radar during the last election campaign.

When you dig into what motivates those four per cent choosing immigration as the most important issue determining their vote, over half want “immigration reduced a lot”. Previous survey evidence supports the claim that negative perceptions of immigration drive the salience of the issue. For example, the Scanlon Foundation found immigration and asylum issues ranked as a top five issue in the community during 2010, a year that featured a big public debate about the sustainability of Australia’s population and immigration.

Figure 1: Attitudes towards the level of immigration in Australia 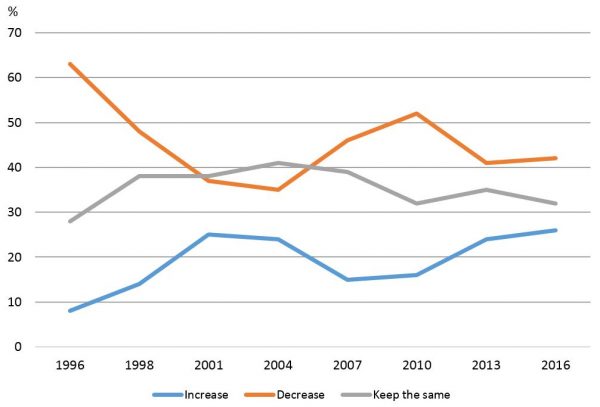 The results in Figure 1 are supported by a number of other well-established public opinion surveys, such as the ANUPoll, the Lowy Institute Poll and the Scanlon Foundation’s annual Mapping Social Cohesion report. These results place Australia as one of the more welcoming countries to new migrants. It is well established (Figure 8.3) that attitudes towards the level of immigration do not correlate with the actual immigration level and instead move in line with unemployment. Other factors that can move public attitudes include the politicisation of the issue.

Of particular importance for public opinion is whether immigrants are seen as good or bad for the economy and the effect on jobs. The Australian Election Study finds from 1996 to 2016, between 50 and 60 per cent of respondents said immigrants were good for the economy making it a consistent finding. At the same time, there has been a decline in the number of respondents who think immigrants ‘take Australian jobs’, down from 40 per cent in 1996 to 30 per cent in 2016.

In this context, it is worth considering the backpacker tax debate towards the end of 2016. Despite coming from different political vantage points, both the Greens and Pauline Hanson’s One Nation Party advocated the same position to reduce the income tax rate for backpackers to 15 per cent (the same rate we proposed here at the Development Policy Centre). This tax rate was to induce additional backpackers to Australia, a lower rate than the original 32.5 per cent proposed in the 2015-16 Budget.

Across the political spectrum, backpackers were not viewed as migrants threatening to take jobs, as the 457 visa program is often portrayed, but as critical to the labour market in regional communities regardless of the fact that one in five backpackers eventually find their way onto a permanent visa and remain in Australia as immigrants. This points to the importance of how different migrants are understood and framed in public discussion. While ultimately it is employers who drive demand for migrants in the labour market, ‘immigrants taking jobs’ has a long history in the public consciousness.

Perhaps the most puzzling element of public opinion to immigration is how this relates to broader attitudes about the size of the population. The rate of net migration to Australia, along with births and deaths, determines the size of the population and while a majority of people agree the level of immigration should be kept the same or increased, a majority of Australians want a smaller population than the trajectory we are currently on. The Productivity Commission notes this confusion “could result from people failing to perceive the difference between levels and growth rates”. The PC also warn this disconnect poses “significant risks to the public acceptance of immigration”.

Undoubtedly there is a greater political interest in immigration attitudes today than in the past. The salience of migration as a political issue is increasing on the back of President Trump’s election and greater representation from One Nation. As has occurred in the past, this may lead to more negative public opinion on the issue of immigration. We can already see political rhetoric is changing. That said, it should be remembered that overall public opinion in Australia is quite positive to migration, with more people wanting migration levels to be kept the same or increased than those who want it decreased.