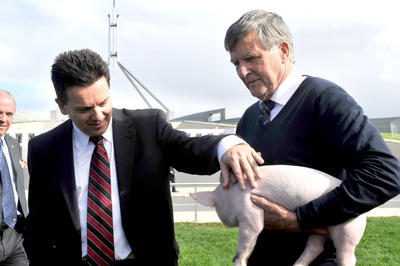 This is a guest post by Malcolm Bosworth and Greg Cutbush.

Australian Prime Minister Julia Gillard and her government’s “Trading Our Way to Prosperity” statement (in response to the Productivity Commission’s Report on Bilateral and Regional Trade Arrangements) is commendable.

It rejected Australia’s regrettable preoccupation with preferential trade agreements (PTAs), and heeded the Productivity Commission’s advice that trade policy should be reviewed against the “principles of unilateralism, non-discrimination, transparency”, and “the grand unifying principle of trade policy as an indivisible part of overall economic reform”.

The statement says much of what is required to correct past mistakes, and the stress placed on returning to unilateralism is especially welcome. Its reaffirmation that “trade policy and microeconomic policy are as one” is refreshing ù a reminder that “the best trade policy is domestic economic reform”.

But still the statement has some important omissions that need to be addressed.

For one, the statement fails to tackle Australia’s highly trade-restrictive quarantine system ù criticised repeatedly by the four-yearly WTO trade review of Australia, including in its latest report. The WTO reported that at its Peer Review in Geneva “virtually all WTO Members expressed concern over Australia’s strict SPS (sanitary and phytosanitary) requirements, including the lack of cost-benefit analysis; they urged Australia to re-evaluate these measures bringing them more into line with international norms and thus rendering them less restrictive as regards imports”. It is time Australia heeded such criticisms and reformed the quarantine mess. Australia needs to install assessment processes that consider not just the interests of a complaining group of producers, as the present system does, but also the national interest (including producers using the imports in question and final consumers).

Neither PTAs nor occasional WTO rulings can repair the quarantine system. It needs a fundamental overhaul. Its main weakness is that the evaluation model employed is lopsided in that, quite deliberately, the key benefits of freer trade ù the benefits to consumers and other users of cheaper product ù are not counted. Making a bad policy worse is the poor quality of quarantine administration. The quarantine agency’s one-sided evaluations frequently contain basic errors, such as double-counting pest costs. More importantly, administrators can become preoccupied with irrelevant details which are highly susceptible to political influence.

The malleability of Australia’s quarantine assessment system was exposed recently in regard to New Zealand apples, the history of which goes back several decades. In 2007, after repeated frustration, New Zealand appealed to the WTO against Australia’s virtual ban. A WTO panel heard the complaint in 2008 and 2009, and in an appeal in 2010. At each stage, the panel upheld New Zealand’s complaint. The process was drawn out and expensive, and in the end Australia had no choice but to accept the ruling that its position was “not coherent and objective”.

Four years after the complaint, the WTO ruling led to the New Zealand application to supply apples being reviewed once more by the quarantine scientists in Canberra. In May 2011, following five months of deliberation, a new regime for importing NZ apples was proposed. In what must be one of the most spectacular turnarounds in Australian administrative history, the new regime proposed by Biosecurity Australia will entail compliance costs of just a few cents per kilogram. Indeed we are told by industry contacts that the per kilo cost of the proposed regime to New Zealand suppliers will be just one-tenth that of the regime they appealed against back in 2007. Both the 2011 and 2007 assessments were supposed to have been “science-based”. Nominally the method used in each case was the same ù yet the outcomes were vastly different ù demonstrating how open-ended and arbitrary the whole process can be.

Commendably, the government’s statement notes that “legitimate quarantine restrictions should not be used as a surreptitious measure to protect domestic primary industries against competition from imports”. It goes as far as stating that accepting the WTO ruling to allow Kiwi (and Chinese) apple imports is “testimony to its commitment not to use quarantine as an artificial trade barrier”, helping “send a clear message to our trading partners that the government is committed to a science-based quarantine regime that does not create artificial barriers to trade, and will not use quarantine as back-door protection”.

But unless Australia reviews its quarantine system from the ground up, there can be no assurance of this. If the quarantine processes could get it so wrong for so long with Kiwi apples, surely the system needs major repair.

Australia’s quarantine measures, which still prevent commercial imports of many fruits and vegetables, should be one of the first areas reviewed as part of Australia’s return to unilateralism.

And, in terms of the number of administered protection mechanisms needing urgent attention, this is the tip of the iceberg. The anti-dumping system, for example, is equally in need of reform. If the government is to achieve its newly stated trade policy goals, as a matter of priority, all these mechanisms need overhaul.

Malcolm Bosworth and Greg Cutbush are Visiting Economists at ANU Enterprise. Their article appeared in East Asia Forum, which is an initiative of the East Asian Bureau of Economic Research.