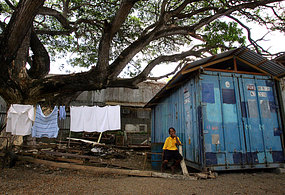 The recent headlines comparing HDI values for Papua New Guinea’s Western Province to those of Zimbabwe and the DRC have certainly caught people’s attention. The comparison has been made by Professor Mark McGillivray and is based on research that he presented at a recent conference at Deakin University. Unfortunately, the research is based on data that is mostly more than 10 years old so it cannot be expected to show us today’s realities.

Professor McGillivray has estimated values for a Human Development Index (HDI) at the Provincial and District level in PNG. This approach is well established and combines various measures of income, health and education into a single numerical index which can then be used for comparison. A composite measure like the HDI can only ever be as good as the data that is used to create it. In this case the data has been taken from the ‘Provincial Profiles’ [pdf] which was published by the PNG National Research Institute in 2010 and collates information at the Provincial and District level from a number of Government sources.  Within this report the data on life expectancy used by Professor McGillivray dates back to the 2000 Census. The measure of education is a hybrid of the adult literacy rate measured in the 2000 Census and the School enrolment rate measured by the Department of Education in 2007.

The third component of the HDI is a measure of income.  Provincial GDP data is not readily available for PNG so Professor McGillivray used national GDP measure and data from 2002 on the proportion of the population in each Province living within 5Km of a National road. These two measures were then combined to form a Provincial GDP measure. The rationale for this approach is that proximity to a national road is correlated with market access and opportunities for income generation. However, this ignores other modes of transport and other factors known to affect incomes in PNG such as household and environmental characteristics.

The district rankings produced by Professor McGillivray’s analysis differ significantly from the ranking produced in a similar analysis [pdf] carried out by the PNG National Economic and Fiscal Commission (NEFC) in 2004. The NEFC study used the same data from the 2000 census to measure health and education outcomes but used the incidence of poverty estimated in a World Bank poverty mapping study [pdf] for the income component of the index. The outcome was a ‘District Development Index’ that was explicitly based on the HDI methodology.

The scatter chart below shows the correlation between the rankings of each district in the two studies with lower rankings (bigger numbers) indicating lower levels of development: 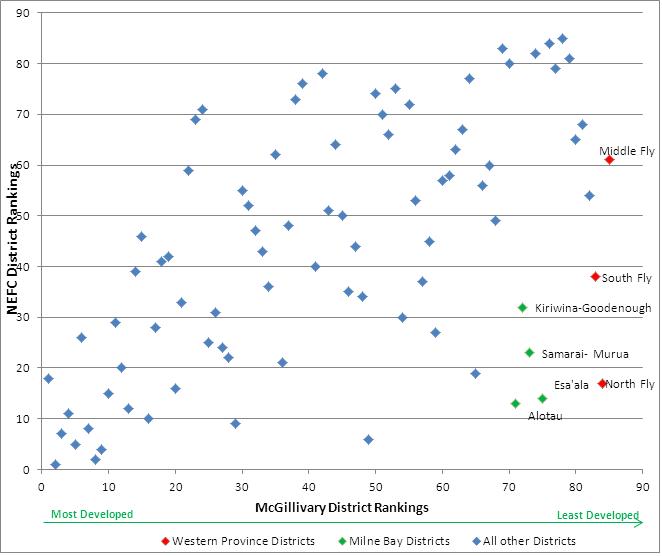 Looking at the scatter plot we can see that the methodology used by Professor McGillivray produces a ranking that is substantially different to the ranking generated by the NEFC. This is confirmed by Spearman’s rank correlation coefficient which, at 0.53, is lower than one would expect from two indices that purport to measure the same thing using very similar data.

It is also relatively easy to see that, compared to the ranking produced by NEFC, Professor McGillivray’s methodology heavily penalises districts in Milne Bay and Western Provinces.  The reason for this is almost certainly that these two Provinces have significantly lower rates of access to National Roads than other Provinces. For example, in 2002, the proportion of people in Western and Milne Bay living within 5km of a National Road was 17.2% and 21.1% respectively. In contrast the average rate for the remaining 17 provinces is almost 50%.

The weak correlation between the two indices and the dramatic shift in the rankings for districts in Western Province and Milne bay suggest that careful attention should be given to estimation of the income component of the HDI. On face value, the approach taken by NEFC is preferable since it is available at a much higher level of geographical disaggregation and takes account of a wider range of relevant factors. It also avoids findings of extremely low development in districts such as North Fly and Alotau which have significant economic activity but are within Provinces that do not have an extensive network of National roads.

Notwithstanding questions about the best methodology, the real issue ought to be the availability of good quality recent data. The PNG National Statistical Office (NSO) is currently working to process and analyse data from the 2010 Household Income and Expenditure Survey and the 2011 Census. This data will permit a wealth of analysis and will enable a clear assessment of PNG’s human development achievements over the past decade.  Considering just how important this is, and how useful more frequent data collection would be, it’s surprising that the NSO is not given more support from the PNG Government or foreign donors. In a week of news stories based on old data, this story has gone untold.