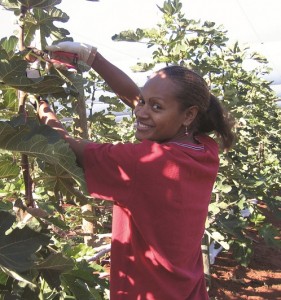 Susan Jenkin is the CEO of Ironbark Citrus. She is a strong supporter of the Government’s Seasonal Worker Program (SWP) for the Pacific. The following is an edited version of her presentation at the Pacific Islands Labour Sending Countries (PAILS) Forum held from 22-24 October 2013 in Apia, Samoa.

Ironbark Citrus is a family business set up by my husband Allen and myself. It started in 1990 when we purchased our first farm in Mundubbera, which is located in the Central Burnett district in Queensland, Australia. Since the purchase of this first property we have been on a long journey to develop our farms into mature mandarin orchards, right from the planting of the seeds for the rootstocks for the trees.

Over the years we have added a packing shed, cool rooms and a second farm, which we developed from scratch. We now have about 130 hectares of mandarin orchards with over 70,000 trees, producing about 5,000 tonnes of mandarins a year. About 90% of our mandarins are exported, mostly into Asia.

Our mandarin harvest season runs from mid-April until mid-August, with our labour needs peaking during the first eight weeks of our harvest. Mandarin growing, like most horticulture, is a very labour intensive industry, with all pruning, thinning, harvesting and packing activities done by hand. At the peak of our season we require at least 120 extra employees to complete our harvest. In fact, the management of labour is a huge part of our business, and takes up 50% of our expenses budget.

Mundubbera is a small rural community with a population of around 2,000 people in the district. The size of the community, and the fact that there a number of large horticultural operations in our area, means that there is a shortage of available labour for our business, and that our peak seasonal labour demands must be met from outside the district. In fact, our labour demands can be only met by using labour from outside Australia.

As you are probably aware, one of the requirements we have to fulfill before being allowed by our government to employ Pacific seasonal workers is to make all positions available to Australians first. Well, so far, over the past four years, we have advertised something like 1,000 positions. We have a policy of offering a position to all Australians who complete the application. So we have offered a total of about 50 Australians positions. Of these 50 or so, we have had less than 15 starters, and less than five who have stayed for the six months required.

Prior to the start of the Seasonal Worker Program in Australia, (and the pilot program) we were totally reliant on Working Holiday Visa holders (what we call “backpackers”) for the majority of our labour requirements. Now about 45% of our labour force is Pacific seasonal workers, 45% is backpackers, and 10% is Australians – with the majority of the Australians being part of our permanent workforce.

So as you can see, Pacific seasonal workers are now an integral part of our workforce and we now source over 70 workers annually in a series of four recruitments – in April, September, December and March; overlapping groups at times of peak labour demand. We have employed workers from Tonga and Papua New Guinea, and look forward to welcoming our first workers from Timor-Leste this December. For us, the program is clearly beneficial.

Our Pacific seasonal workers are clearly more productive and efficient than our other workers. In fact, this year, the Australian Department of Agriculture, Fisheries and Forestry funded a small survey of the efficiency and productivity of our Pacific seasonal workers compared to our backpacker workers. Robert Leith and Alistair Davidson from the Australian Bureau of Agriculture and Resource Economics carried out this survey. They compared the earnings of harvest staff over a period of three non-consecutive weeks over a five-week period during our peak harvest period. The workers were all paid ‘piece rates’ for their harvest work.

I believe the Seasonal Worker Program provides an excellent source of efficient and productive labour for industries such as horticulture, which have such high seasonal labour demands and are so often located in areas that are quite remote from major population centres. For this scheme to thrive in Australia, the economic benefits need to be clearly communicated to employers and industry bodies. I believe further research to validate this initial research is needed to assist with this. Though the use of the SWP by Australian employers has been slow compared with the New Zealand experience, I know of no employer who has tried it and then decided not to continue with it.

I also believe that employers are absolutely crucial to the success of the Seasonal Worker Program. A program which doesn’t put the employers’ needs and concerns at the centre of their planning will struggle to succeed. A program with no employers is no program. This is a challenge for the Australian government, which works from the premise that the central focus of the program is to deliver aid.

Susan Jenkin is the CEO of Ironbark Citrus.