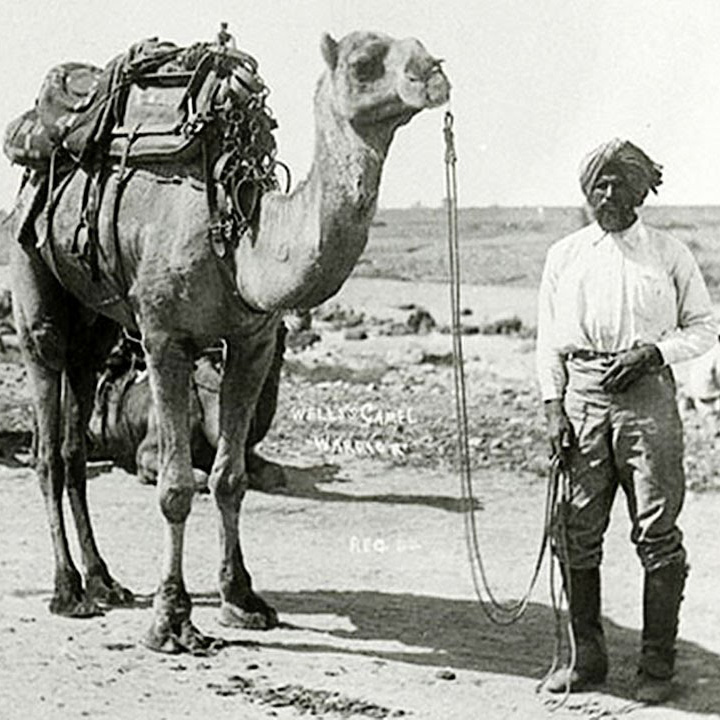 Some people, quite a few it seems, were recently surprised that the Center for Global Development (CGD) had ranked Australia third among developed countries for the development impact of its migration policies.

This gut reaction is understandable if one is thinking mainly about Australia’s policies on refugees and asylum seekers, and not so much about Australia’s regular migration intake. In fact, I’ve argued in a previous blog post that it’s not just a gut reaction; the humanitarian components of CGD’s migration policy assessment are problematic and given surprisingly little weight in the overall assessment.

However, if one thinks specifically about regular migration one might expect Australia to do pretty well in any comparative assessment.[1] Australians are an unusually mixed bunch, generally and rightly proud of the way in which they have woven together diverse traditions and comfortable with relatively high levels of permanent and temporary migration, including from the largely developing Asia-Pacific region.[2] Indeed, according to CGD (Owen Barder’s piece linked above), Australia ranks first among developed countries according to the number of developing-country migrants it accepts as a proportion of its population, with more weight accorded to immigration from poorer countries.[3]

In this post, rather than take CGD’s word for it, I examine the scale and composition of Australia’s regular migration intake from developing countries, drawing on OECD migration statistics. While prompted by the release of the CGD migration policy rankings, this is not primarily an exercise in pummelling CGD’s Commitment to Development Index. Indexes with multiple moving parts are about as likeable as camels, and I doubt there’s much to be gained by looking at them through a microscope. Nevertheless, it is certainly of interest to compare developed countries on this one simple measure: how many migrants they accept from developing countries per head of population.[4]

Why is this measure even relevant for development? In the case Official Development Assistance (ODA), there is a well-established debate about whether ‘in-donor’ expenditures should be measured. Flows internal to donor countries tend to be viewed with suspicion, though, in my view, often wrongly. So why should the movement of a person from a developing to a developed country be seen as a contribution to development?

There are broadly two quite different reasons. First, migration improves the condition of the migrant. This is a legitimate reason, albeit one that is not consistent with the usual notion of development assistance as assistance to a nation. It is a quasi-humanitarian rationale. And second, migration often generates benefits within the source country, for example via remittances, commercial linkages or reduced population pressure.[5] This is a straightforward development rationale.

If the relevant benefits of migration are seen as primarily personal ones, there is no strong reason to weight migration flows according to the development status of countries of origin. The fact that one person comes from China and another from Cambodia has, in itself, little bearing on the benefits of migration to them.[6] Their starting points might or might not differ somewhat, but the opportunities opened up by migration to far richer countries dwarf any such difference.

On the other hand, if the relevant benefits of migration are seen as primarily located in countries of origin—whether at the national or the household level—there is a good case for weighting migration flows according to the development status of those countries. The potential value of remittances, for example, like the potential value of aid, is greater in countries whose development needs are greater.

Of course, you don’t have to adhere exclusively to one or the other view about the value of migration from developing countries. Below, I use both.

Given its relatively high rate of migration overall (seventh-highest in the OECD in 2014)[8], and its just-above-average intake of developing-country migrants, Australia ranked third after New Zealand and Chile in terms of the ratio of developing-country migrants to its population over the three-year period (Figure 1).[9] That ratio was 0.63% as compared with 0.27% for the OECD as a whole.[10]

Figure 1: Developing-country migrants as a proportion of host population, 2012-14 averages 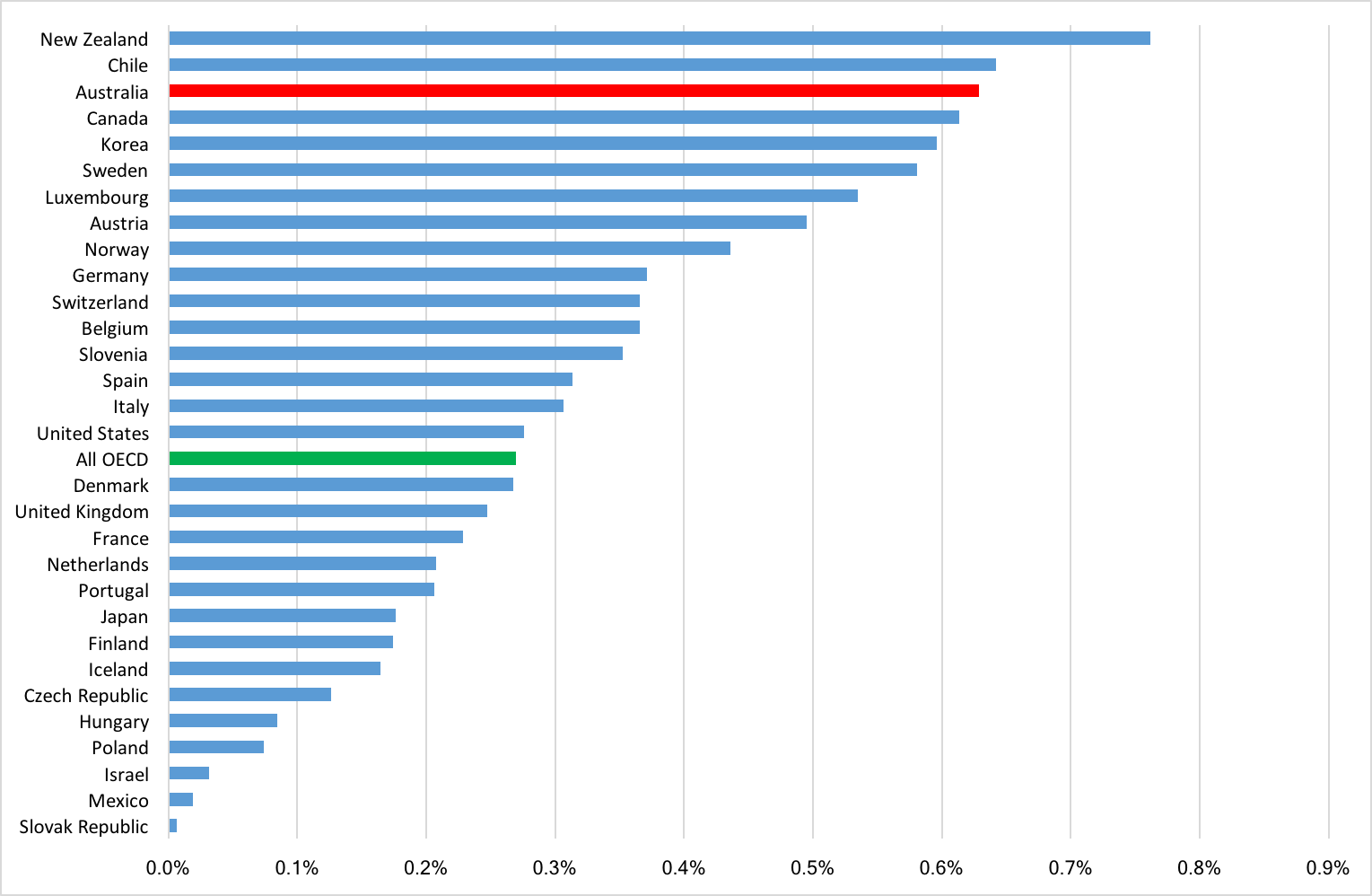 As noted, CGD’s comparison of migrant flows from developing countries is said to take into account the development status of source countries. We don’t know how it does so because CGD has, up to now, not revealed its methodology on this point. Whatever their approach, the result is that Australia comes out in first place, doing even better than it does on the raw numbers. If CGD’s methodology is sound, this implies that Australia’s intake is exceptionally favourable to countries in need. This might come about, for example, because Australia takes proportionately many more migrants from India than other OECD countries do (Figure 2). But we don’t actually know how it comes about. 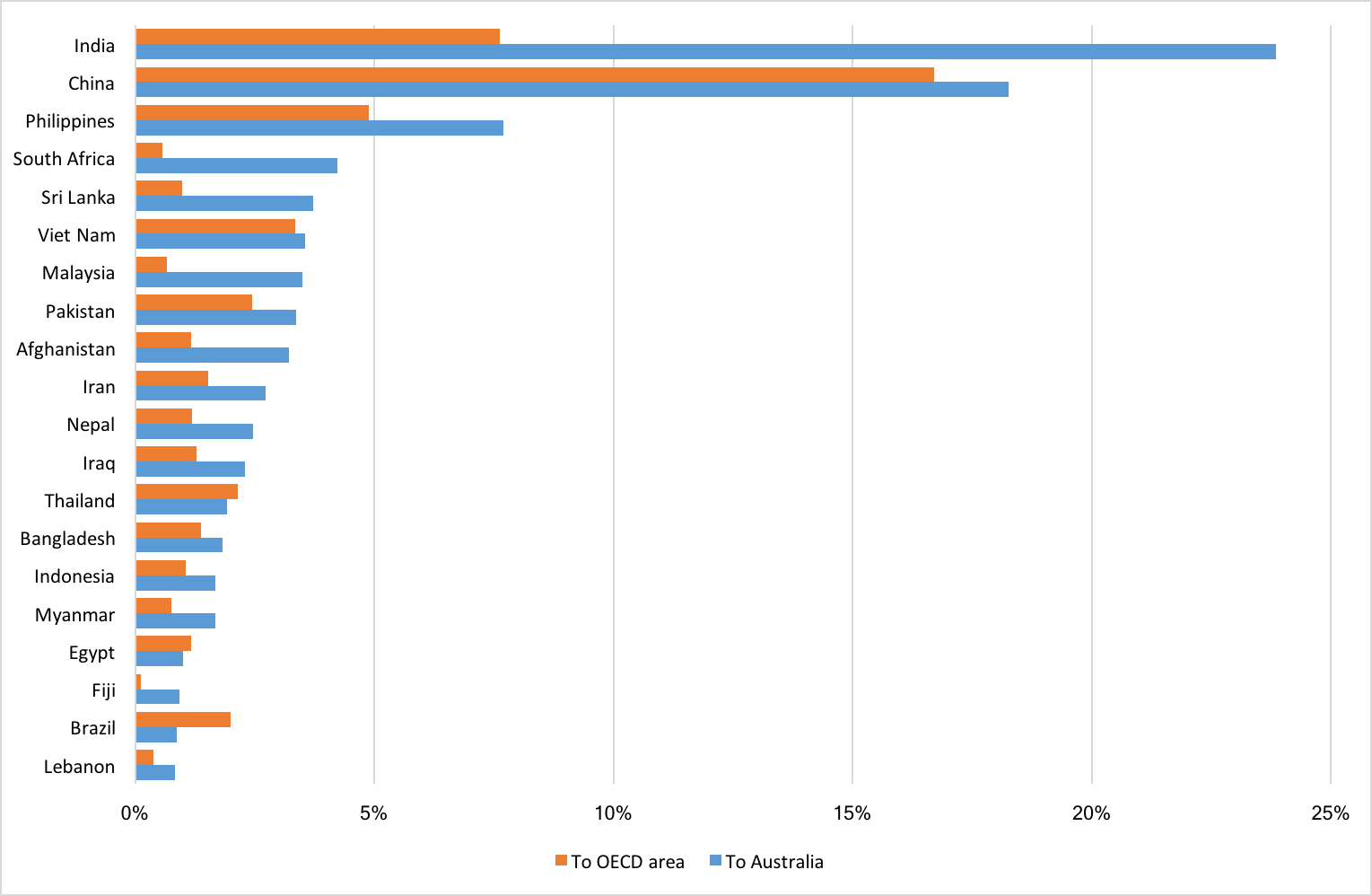 Owing to a sneaking suspicion that Australia’s intake is probably not more favourable to countries in need than that of every other OECD country, I undertook my own comparison. This necessitated a choice about exactly how to weight migrant flows in order to reflect the development status of source countries. Without wanting to launch into an essay on the merits of each possible approach, suffice it to say that using per capita income or poverty incidence seems unsatisfactory. Part of the reason for this is a parochial one. Many small island states, like those in the Pacific, are not terribly poor, yet for a range of reasons to do with overcrowding, limited resources and an entrenched dependence on remittances, benefit disproportionately and deservedly from migration to the OECD area. At the other extreme, a country might be relatively poor while also being large, endowed with resources and containing prosperous cities that offer internal migration opportunities.

I decided instead to weight migrant flows using a very simple variable, namely aid dependence as measured by ODA per capita. The basic thought here is that, in general, the degree of the country’s aid dependence reflects a considered judgement on the part of its official donors about its development needs. With this approach, migration from small island states, which usually have high levels of ODA per capita, will obviously be accorded more weight, while migration from big, resourceful countries will be accorded less.[12] On applying this approach to 2014 flows, Australia’s rank falls quite a way, from fifth in that year to 12th (Figure 3).

Figure 3: Developing-country migrants, unweighted and ODA-weighted,
as a proportion of host population, 2014 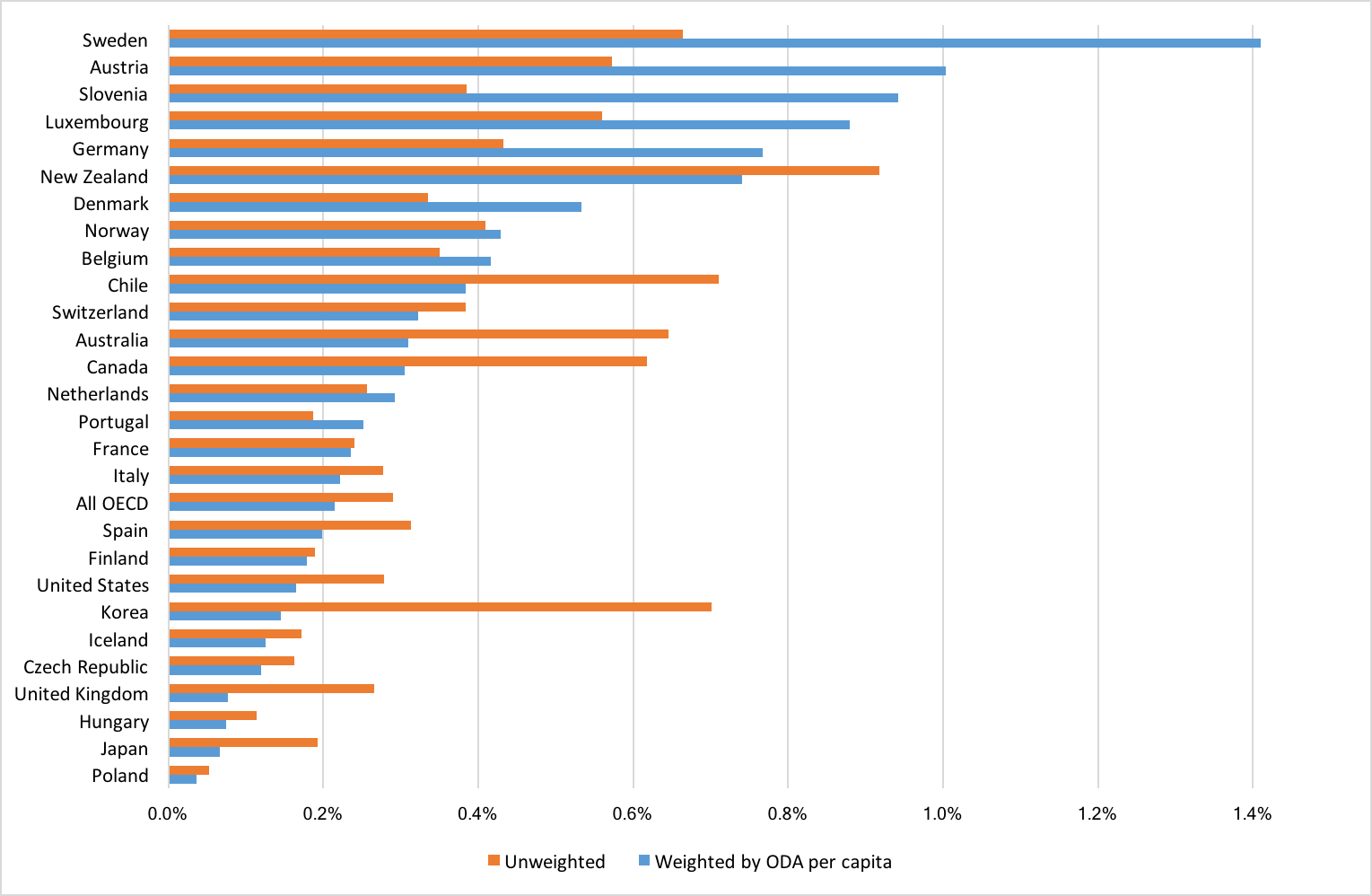 On the ODA-weighted numbers, performance on migrant acceptance as a proportion of host country population is reduced by some 50% in the cases of Australia and Canada, and by much more in the cases of Korea and Japan.[13] New Zealand goes relatively unscathed.

At once very good and middling

What should we conclude from this discussion? As far as permanent migration is concerned (seasonal worker migration is another story), Australia does have a high intake from developing countries. If you think of the benefits as accruing mainly to the individuals who migrate then the development status of their countries of origin is not particularly important, and the unweighted rankings tell a fair enough story which portrays Australia in a defensibly positive light.

However, if you are interested in the benefits of migration within source countries, particularly through remittances, or perhaps if you believe that scarce migration places should be selectively allocated to countries where the development need is greater, then some kind of weighting needs to be applied. CGD’s black-box weighting, for some reason, catapults Australia to the first rank. Under the methodology I have applied, which I think is intuitively attractive, Australia’s contribution is only middling. It’s not terrible but nor is it world-beating.

[1] By ‘regular’ migration, I mean migration for permanent settlement. This includes recognised refugees, but not asylum-seekers or temporary migrants (students, seasonal workers and skilled workers on ‘457’ visas.)

[2] It should be noted that about 30% of Australia’s regular migration intake is reserved for ‘family reunion’ migrants who naturally come from countries already strongly represented in the Australian community, such as China, India and Vietnam.

[3] Countries are rewarded for accepting migrants from ‘poor countries, rather than relatively rich countries’.

[4] CGD’s migration policy assessments use a composite index that takes into account inflows of permanent migrants, inflows of students, a country’s performance on a non-CGD ‘Migrant Integration Policy‘ Index, and performance in the several other dimensions discussed in my previous post, linked above.

[5] By comparing the World Bank migration and remittance matrices here you can see that remittances go quite proportionately to the main source countries.

[6] The realised benefits will depend to some extent on the size and structure of the immigrant cohorts they join in Australia—though, in the case of the example given, this would likely result in greater realized benefits to immigrants from China than those from Cambodia.

[9] Three-year averages are used because the figures jump around quite a bit from year to year — for example, if we look at data for the single year 2014, Australia ranked fifth rather than third on the raw numbers.

[10] By sheer coincidence, the range of ratios we see here is quite close to the range of donors’ ODA/GNI ratios, where the average is 0.3% and the best ratios are around 0.7%.

[12] Specifically, I apply to migration flows a multiplier which is the ratio of a country’s aid per capita to the global median, where the latter amount was about $50 in 2014. In the case of small island states this ratio is sometimes enormous (Nauru is a case in point) so I cap it a little arbitrarily at 10, which is slightly above the highest ratios seen in larger developing countries.

[13] If you delve into the details, it emerges that the overall effect, in Australia’s case and in general, is to give greater weight to flows from Central Asia and the Middle East.