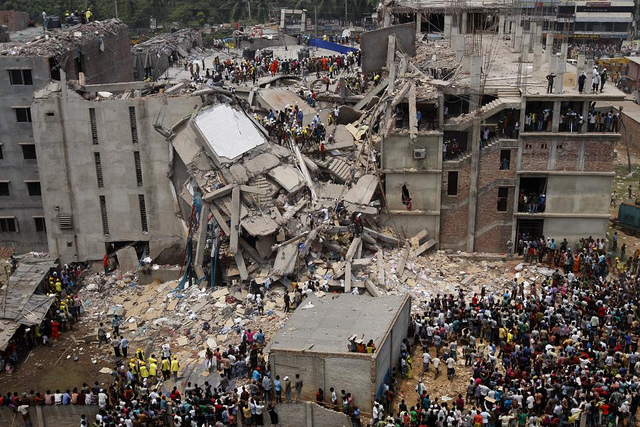 The global garment industry is a major generator of jobs, exports and economic growth. The EU’s market share is valued at US$350 billion. But the people who make our clothes are struggling – in precarious, poorly paid and often dangerous work. The collapse of the Rana Plaza factory building in Bangladesh killed 1,138 people. These workers were supplying brands on UK high streets: Benetton, Mango, Matalan and Primark.

In response to protests from workers and consumers, many brands have signed up to voluntary codes of conduct. But factories’ compliance is notably partial: more likely when cheap to implement, benefits owners, conforms to social norms, and does not alter the balance of power. Labour abuses continue.

Box-ticking codes of conduct seldom amplify workers’ collective strength. Their activism is often deterred by the threat of job loss and police brutality. Governments are often reluctant to uphold workers’ rights, for fear of firms relocating overseas. This mobility of capital (and immobility of labour) creates a global race to the bottom.

Despite these constraints, workers are still pushing for reform. Mass strikes and demonstrations have led to concerted increases in the minimum wage across South-East Asia. In Vietnam, wildcat strikes comprising 200,000 workers led to a 30% increase in the minimum wage and mandated annual increases thereafter. Successful activism galvanises further mobilisation by demonstrating that workers can influence wage negotiations. Union power also strengthens the the International Labour Organisation’s ability to enforce minimum wage compliance.

Among the many constraints impeding Asian trade unions are gender ideologies and inequalities. Key here are “norm perceptions”: beliefs about what others think and do. These widespread expectations of acquiescent women and assertive men mean that unions are often patriarchal and authoritarian. Union leaders in Bangladesh and Cambodia often lecture at women, rather than listening to them. Women’s priorities are marginalised.

In Indonesia, research shows a large number of workplaces terminated women employees upon pregnancy, but no union raised this issue. If women perceive unions as unresponsive, they may be reluctant to approach representatives and engage in union activities (as observed in Bangladesh, Cambodia and Indonesia).

Male-dominance of union leadership seems self-perpetuating. With little exposure to women leaders, many assume they are less capable of leadership. Women may also be reluctant to speak out due to concerns about how they will be perceived and treated by others. Assertively negotiating with employers, addressing large rallies and leading demonstrations are commonly regarded as masculine traits in Bangladesh, Cambodia and Thailand. Women who transgress these norm perceptions may be chastised, which in turn deters others. Working-class women may also doubt their capacity to challenge dominant men. “Don’t hit a stone with an egg,” cautions one Cambodian proverb.

With minimal support for women leaders, unions remain patriarchal. So, many women disengage. This is hugely significant in a mostly female workforce. Indeed, women’s limited participation in union activities was identified as the most widely identified internal problem, by Cambodian unionists.

To strengthen the power of workers, it seems imperative to tackle gender inequalities. A growing body of evidence suggests that gender ideologies weaken with exposure to women demonstrating their equal competence in socially valued, masculine roles. Exposure to female mechanics, managers and union leaders could be amplified through active labour market interventions: scholarships, in-service training, gender quotas. For example, France’s national development agency has lent the Garment Manufacturers Association in Cambodia US$3.26m to establish a training institute that improves the sector’s sustainability. They might have stipulated gender quotas for training programmes for mechanics and managers.

Connecting women with peers in neighbouring countries may also help. Seeing feminist victories elsewhere – gender quotas in Indonesia, Malaysia and the Philippines – could boost confidence in the possibility of social change and catalyse further action.

Besides supporting feminist campaigns, the Australian government could provide trade incentives for improved working conditions. While international trade reform is clearly enormously complex, it is not impossible. It may be more feasible than trying to shift gender ideologies and promote good governance overseas.

With trade incentives for improved labour standards (monitored by the International Labour Organisation’s Better Work Programme), Australian consumers would be supporting better jobs (rather than sweatshops). Indeed, international development isn’t just about foreign aid interventions over there; it’s also about getting our own house in order.

Alice Evans is a Lecturer in Human Geography at the University of Cambridge. On Twitter she is @_alice_evans.

This article was originally published on The Conversation. Read the original article here.

Note: Alice Evans will be presenting on ‘thinking and working politically in the global garment industry’ at the Australasian Aid Conference, 15-16 February 2017. Find out more and download the conference program here.

Alice Evans is a Lecturer in Human Geography at the University of Cambridge.