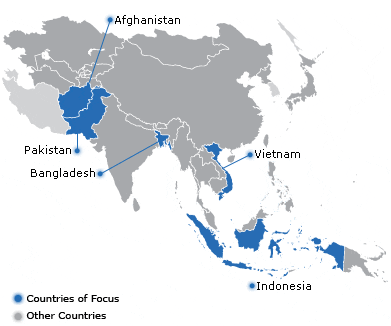 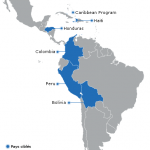 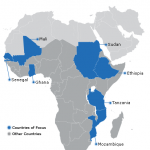 As Australia looks to double its aid budget from $4.3 billion per year to $8.6 billion per year by 2015-16, it is instructive to examine how other countries are designing their aid programs. This blog has recently posted articles on new directions in UK and New Zealand aid. Canada has also made recent significant shifts in the direction of its aid program.

Like Australia, Canada has recently doubled its international development assistance. From an allocation of US$2 billion in 2003, Canada has allocated US$5 billion in the 2010-11 budget. Again like Australia, Canada contributes 0.32% of gross national income to official developmentassistance. Canada has long had substantial reach and impact in its aid program and had developed a strong reputation in the Caribbean, Anglophone and Francophone Africa and in Southeast Asia.

In contrast to the traditional wide reach of Canadian aid, in 2009, the Canadian government announced that it would spend 80% of its bilateral aid money in 20 “countries of focus.” According to the Canadian government, the 20 countries were chosen based on “their real needs, their capacity to benefit from aid, and their alignment with Canadian foreign policy priorities” with the overall goal of making Canada’s international assistance “more focused, more effective and more accountable.” The 20 countries are: Bolivia, Colombia, Haiti, Honduras, Peru; Afghanistan, Bangladesh, Indonesia, Pakistan, Vietnam; Ukraine; West Bank and Gaza; Ethiopia, Ghana, Mali, Mozambique, Senegal, Sudan, Tanzania; the 20th “country” is a regional Caribbean program.

Compared to previous Canadian aid commitments, there is substantially increased focus on middle-income Latin American countries and less focus on Africa including in a number of countries where Canada used to have a significant presence including Cameroon, Kenya, Cote d’Ivoire, Burkina Faso and Malawi. Despite the claim that Canada’s new more narrow focus is based on needs, the shift towards Latin America (where GDP per capita is higher than in many African nations) and away from Africa more likely signifies a foreign policy and trade emphasis. Canadian commentators have noted that there was no consultation with Canadian development actors nor with African counterparts.

Canada also maintains a multilateral aid program that, in 2008, represented 30% of total official development assistance, according to the OECD.  This is more than Australia, which contributes just 10% of ODA as core contributions to multilateral agencies, but less than the 37% allocated by European (DAC) donors.  Just under half of all Canadian multilateral aid went to Africa in 2007 and 84% to least developed countries and low income countries.  The Canadian government also announced that Canadian aid will be focused on three areas: food security; sustainable economic growth; and children and youth.

Interestingly, the Canadian shift occurs at a time when Australia is widening the scope of its aid engagement. Whereas Australia’s bilateral aid program used to focus almost exclusively on Southeast Asia and the Pacific, the amount of funding allocated to Africa has more than doubled (albeit to only about 5% of total aid) and the number of countries in Africa to which Australia will give has expanded from a handful in East and Southern Africa to the whole continent. Australian aid has also been expanded into Latin America and the Caribbean. The Canadian and Australian examples perhaps represent two models of expanding aid and working towards aid effectiveness – one that narrows focus and one that widens scope.

One of the key questions emerging from these two models is whether greater selectivity leads to greater aid effectiveness. There are perhaps two main ways to examine this question: 1) allocative efficiency with regards to country choice and 2) technical efficiency from working in fewer countries.  If Canada has selected focus countries based on needs, neglect by other donors and likelihood that Canadian aid will strongly support national development plans to lead to important transformational development, then allocative efficiency could certainly be improved.  For example, the African development arena is already crowded and perhaps greater focus on Latin America and the Caribbean is warranted.  This argument is strong for countries such as Haiti where Canada has long been a substantial and well regarded partner but perhaps less so for Bangladesh and Vietnam where Canada would be a small player.  By working in fewer countries, some pressure will be taken off administrative resources and could allow Canada’s aid management to be simplified and streamlined.  Canadian aid management would be required to develop a deep understanding of fewer countries and would need to manage fewer offices suggesting that the quality of aid knowledge and delivery could be expected to improve.

It is too soon to evaluate the new directions of Canada’s aid program and many Canadians, including the author, lament that Canada seems to have abandoned some of its traditionally strong relationships with some African countries.  But the global imperative to improve aid effectiveness does suggest that changes to the aid arena are needed and working better in fewer countries is an appropriate way forward.  If Canada can come to be seen as a substantial, knowledgeable, deeply-engaged aid partner in their 20 focus countries with a robust program that supports national goals – rather than a small, niche, friendly donor acting from afar, then that will a strong outcome for Canada and for development more generally.

Joel Negin is a lecturer in International Public Health and a research fellow at the Menzies Centre for Health Policy, University of Sydney.