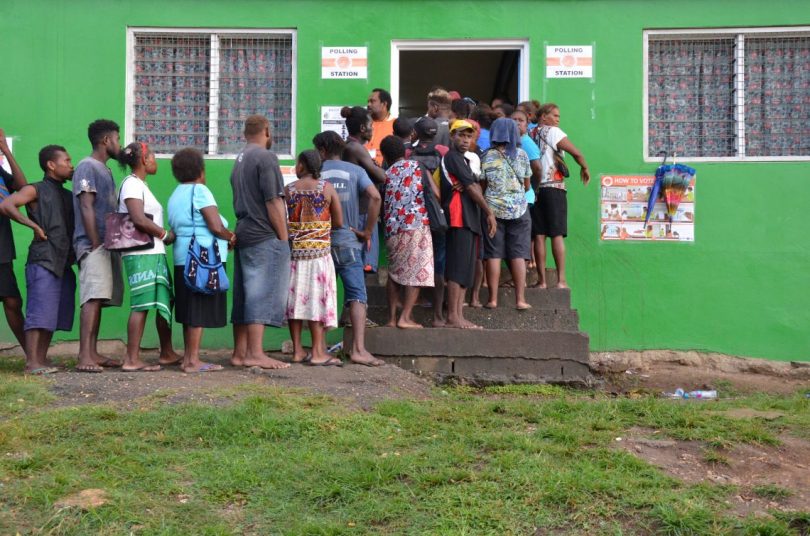 Constituency development funds (CDFs) are contentious in Solomon Islands. They’re a significant slice of government spending (10-15 per cent) and can be used largely free of restriction by MPs in their electorates. In theory, they allow MPs to support communities when the state is not up to the task. But the funds come with much potential for misuse.

In late July, the Island Sun published an article on a recent evaluation of CDFs. The evaluation was run by the Solomon Islands government in 2018 and funded by the European Union. Amongst much else, the evaluation scored constituencies based on how well their MP used the CDF between 2014 and 2018. The scores came from impressive work by the evaluation team. They visited every constituency in the country and appear to have randomly sampled communities within constituencies. Constituency scores were derived from the views of people spoken to in communities. Constituencies were scored on several indicators and these were averaged to produce an overall score. The Sun’s article included a table of overall scores. The chart below is a histogram of constituencies’ scores. Scores could range from zero to one, but in reality the lowest score was 0.1 and the highest just over 0.6. The mean and median scores were 0.38. Based on the scores, the evaluation rightly concluded that CDFs aren’t typically being managed well. 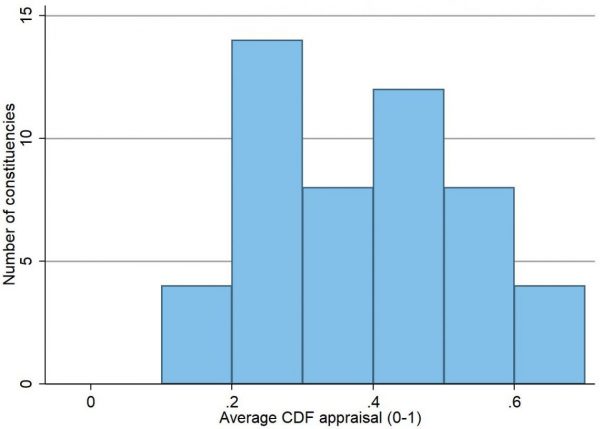 That was the overall conclusion. When I saw the Sun’s article I decided to test something else. I wanted to know whether there was a relationship between quality of CDF use and whether MPs did well in the 2019 elections. Were voters more inclined to vote for MPs who used their CDFs well?

This scatter plot shows what I found. The Y-axis is my measure of incumbent success. The X-axis is the overall CDF performance appraisal. Each dot is a constituency. The large outlier, who laid waste to his opposition, is Namson Tran in West Honiara. (Excluding West Honiara from my analysis does not change my main findings.) 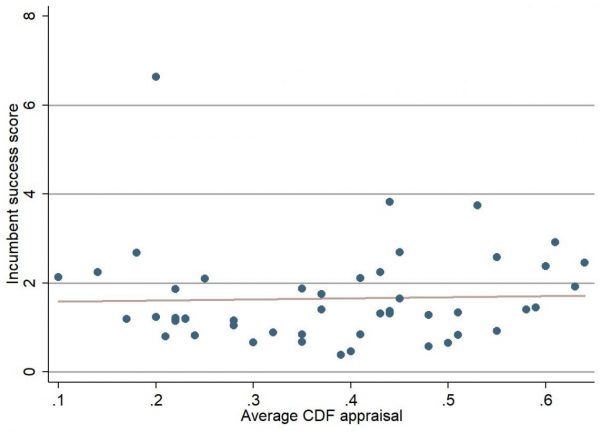 If you stare hard at the chart you can see that the line of best fit slopes up ever so slightly, but the relationship between CDF appraisals and incumbent success scores is not statistically significant. MPs whose CDF use was appraised more positively by people surveyed in their electorates did not perform better in the 2019 elections. (This remains true if I add controls for constituency population and MP winning margin in 2014.)

The finding is puzzling. CDFs afford MPs a lot of money. And politics in Solomon Islands is strongly clientelist. People don’t usually vote on national issues. Spending constituency funds well ought to confer an electoral advantage.

There is a potential, not particularly interesting, explanation for the puzzle: it is possible the report’s data are flawed. I’ve read the report’s methodology. There are certainly issues, but they’re probably not so bad as to hide a real relationship if it existed.

There is also an alternative explanation. This is that most MPs don’t spend CDFs on everyone in their electorate. They usually focus foremost on their supporters and maybe potential supporters. This is an electorally rational strategy. Albeit one that limits the development benefits of CDFs. The teams gathering data for the evaluation, however, didn’t focus just on MPs’ supporters – they spread their attention around constituencies, speaking to people who MPs aided as well as those who they did nothing for. Hence the mixed overall assessments. And hence the lack of a clear relationship – the CDF appraisals came from randomly selected communities around constituencies. MPs’ electoral performance, on the other hand, stems from targeted spending. 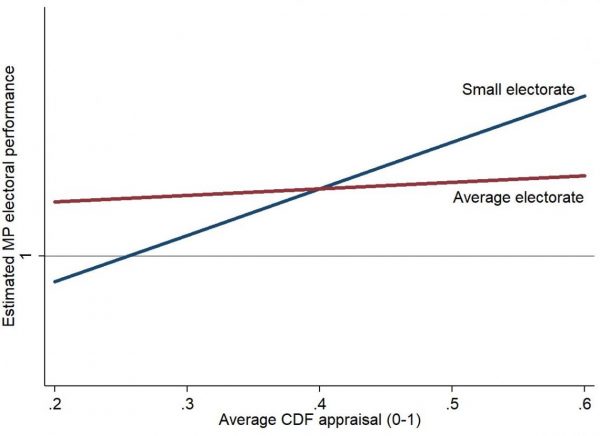 This isn’t definitive evidence, but it is suggestive. Unfortunately, using CDFs to deliver assistance to broad shares of electorates in Solomon Islands is not usually the most electorally effective means of using the funds. Or to put it another way, the desire to be re-elected is not incentivising MPs to spend CDFs well.