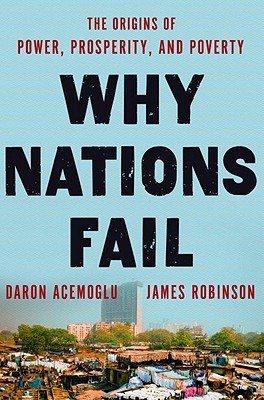 Daron Acemoglu and James Robinson’s comprehensive and challenging work, Why Nations Fail, has spawned a lively debate on the origins of development. The book makes the case that poverty, prosperity, and politics are tightly interlinked and have been for most of modern history. Its reasoning is that the level economic playing field necessary for growth can only be sustained by strong, pluralistic (or “inclusive”) governments; the narrow groups of elites who run the world’s dictatorships fear the creative destruction inherent in dynamic economies and prefer to simply “extract” existing wealth for themselves.

Various reviews have pushed back on this framework, arguing that China’s decades of expansion, Botswana’s diamonds, or the elusiveness of “catch-up” growth are gaps in an attempted grand theory. Some of these reviews, as Acemoglu and Robinson maintain, have simply gotten the details wrong. China, for example, receives substantial coverage in the book, which more broadly states that “extractive growth” is possible, just not sustainable. Still, it should be troubling to the authors that some of their key points are misinterpreted.

Part of the reason it has been difficult to debate the arguments of Why Nations Fail is that the book does not fully describe the “x” and the “y” of its theory. Take its proposed source of economic growth, the “x” of inclusive and extractive institutions. The contours of determining which nations are which are pretty clear to everyone: there are very inclusive countries like the United States, very extractive countries like North Korea, and many shades of grey in between. The problem comes when specifics are required. Arvind Subramanian’s review, for instance, presupposed that India’s nearly uninterrupted string of free elections since independence qualified it as an inclusive government. Acemoglu and Robinson take a dimmer view, citing the long-standing dominance by the Congress party and the communal divisions of its politics.

The drawback of this ambiguity is that it allows for a lot of leeway in interpreting the real world. Say we were to compare the economies of pre-coup Mali (at 2% US GDP per capita PPP) and Singapore (at 126%). We would probably conclude that factors like Mali’s incomplete territorial control and dubious record on corruption accounted for a good chunk of that discrepancy. The explanation makes sense, but what if Singapore and Mali switched their economies while maintaining their political structures? The theory might still claim to explain this alternate world by citing the ouster of Mali’s dictatorship and Singapore’s suspiciously low rate of electoral turnover. Without specifics, it is easy to pick and choose inclusive or extractive aspects of a nation’s government to fit a particular story.

Many reviews have also implicitly called for the theory to provide a clearer definition of the “y” of development, a definition that could have addressed Jeffrey Sachs’s question on Botswana’s diamonds or Francis Fukuyama’s on ancient Rome. Economic growth is clearly part of the answer, but only part; China, after all, has experienced spectacular growth for several decades, but Acemoglu and Robinson see it as primarily extractive and therefore limited. A more accurate description of success would be some kind of sustainable growth, particularly the kind that creates “developed” nations. Why Nations Fail argues that even authoritarian states like the Soviet Union can grow by shifting resources from agriculture to manufacturing, but that such efforts inevitably run out of steam. The true test, then, is growth past a sort of “innovation frontier,” where countries fully embrace the benefits of creative destruction.

Some of the examples in Why Nations Fail apply these criteria more consistently than others. It is clear, for example, that England’s growth since 1688 was sustainable and fuelled by the innovations of the Industrial Revolution. Other cases are more difficult to judge. The book links Japan’s Meiji Restoration to accelerated growth but says little about sustainability. The source of Japan’s growth is actually difficult to pin down as the Meiji government implemented both political and economic reforms, the latter notably including a modernisation program. Japan undoubtedly became more inclusive after the Tokugawa shogunate, but the new government was essentially an oligarchy: there was no Diet until 1890 and only later did the body come into its own. These political changes occurred long after Japan’s take-off industrialisation, so the link from its politics to growth remains an open question.

How can the ideas in Why Nations Fail be assessed more systematically? The second part of this series applies data to that question, particularly in regard to the innovation frontier.

Cory Smith is a research assistant at the Brookings Institution in Washington, D.C. You can follow him on Twitter at @developingcory.