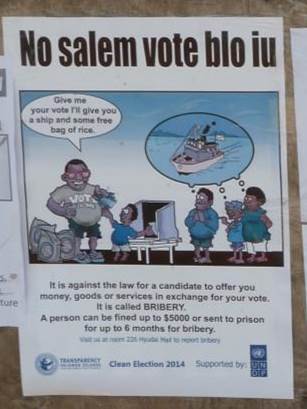 In Solomon Islands the night before elections is known as Devil’s Night. A night of misdeeds, when candidates’ support teams bustle and jostle around electorates in trucks and outboard motor boats buying votes.

The name Devil’s Night is an evocative Solomon Islands twist, but vote buying itself can be found across the developing world. It’s common, but also a puzzle: where ballots are secret (as they seem to be in most cases in Solomon Islands), there is nothing to stop voters from taking money and voting for someone else. And sometimes, quite often perhaps, this is what they do. Yet vote buying must at least work to an extent; if it didn’t it is hard to imagine why candidates would continue to waste their money.

In Solomon Islands vote buying appears to work in a range of ways.

Sometimes vote buying takes the form of what Simeon Nichter calls turnout buying: candidates pay the transport costs of Honiara residents who are registered in the rural constituencies that the candidates are contesting in. When they do this they focus on paying the fares of people from their church (sometimes) or village, or extended relatives – people who will likely vote for them if they are back in their electorate (votes must be cast within electorates).

And sometimes vote buying works simply because voters are grateful for the money, and feel like it would be morally wrong to defect on the implicit contract involved. At other times it works as a signal, allowing a candidate to provide evidence of their propensity to help should they be elected.

Sometimes vote-buying works not by buying the support of voters themselves but through buying the support of influential local leaders. This sort of vote buying usually takes place quietly and well before the election but it is probably the most powerful: either by persuasion or coercion these sorts of figures can often deliver somewhat cohesive blocs of votes.

Beyond its interaction with vote buying, the coercion of some voters is a problem in its own right. A lot of Solomon Islands voters are free to choose, but not everyone. Just like vote buying, coercion ought not be possible in the presence of a secret ballot seems to be enabled both by voters not being 100 per cent confident their ballot is secret (and therefore not willing to take the risk) and also through voters not wanting to disobey authority figures. 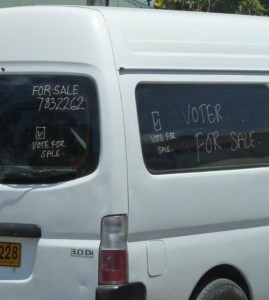 Related to vote buying is violence. Electoral violence in Solomons is not nearly as large scale or as serious as in many countries. (Indeed, that the two elections post the civil war have been largely violence free ­is a testament to the skill of Solomon Islanders in mediating local conflicts.) But violence does occur – campaign teams fight, houses are sometimes burnt, voters are sometimes openly threatened and polling stations or counting places sometimes attacked.

Vote buying, voter coercion, and the possibility of violence: taken together they sound grim. But it isn’t the full picture. Most voters don’t sell their votes. Many (probably most) voters are free to decide who to vote for. And violence may haunt elections in parts of the country, but its actual appearance is rare.

What is more, Solomon Islands has done an admirable job of actually running elections themselves quite well. Not perfectly but given the challenges involved ­– a low capacity state, a country sprawled across island groups, tiny islets and remote inland villages – pretty successfully. Ballot boxes make it out and back, cheating within polling stations appears quite rare, and counting is open and fair.

None of this is inevitable, as the problems of elections in other countries show, and it is an achievement.

So what does this all mean for the elections on the 19th?

Much of the same plus a few new twists – many in some way related to the compilation of a biometric voter roll earlier this year. The new roll replaced an old, inflated one, and appears to have reduced double registrations considerably. It also came with voter ID cards which voters are encouraged (but not forced) to use when voting. The new roll appears much better, although there has been a lot of talk of powerful candidates paying voters to register in the candidates’ constituency rather than in the constituency where the voter lives. As well as talk of candidates’ agents busily buying voters’ ID cards.

And, associated with this, out on the campaign trail vote buying is already underway. Intriguingly, whereas in the past, most of the turnout buying has involved voters being shipped from Honiara to rural constituencies. This time, alongside the compilation of the new roll, there is now a lot of talk of powerful Honiara candidates transporting voters to Honiara – first to register and then to vote. In many ways this makes sense: Honiara is home to a lot of money, and it is very hard to prove that someone is not a resident of the city and therefore ineligible to be registered there.

Harder to fathom is the buying of vote cards: voters can vote without them; and they have photo ID’s on them, which would  mean, absent assistance from polling officials, it won’t be possible to use them to impersonate voters. The best explanation I’ve heard for their purchase is that candidates’ agents have bought the cards with the plan of returning them to voters on the day of the election. And they have done this to stop voters from selling their votes to multiple candidates, and also as a way of reminding voters, at the last minute return of the card, just who they took money from, and who they owe loyalty to as a result.

Voter coercion will presumably occur as it always has (I’ve heard nothing to suggest otherwise) and small scale violence associated with the elections is likely. In particular, there are some hard fought campaigns in Malaita and in the North and East of Guadalcanal. There has also been the violent split of the Christian Fellowship Church in the Country’s Western Province, which appears very likely to lead to confrontation amongst the church splinters and their candidates.

Hopefully, all of this will stay manageable. And that the logistical feats that have seen the running of previous elections go tolerably will be repeated (I think they will, though nothing logistical is ever 100 per cent certain here).

Problems being managed, and elections running ok won’t solve the underlying issues of Solomon Islands politics, nor do these successes negate issues like vote buying. But the things that do work in Solomon Islands elections help, at least, hold the window of democratic space open for local solutions to emerge through, and in the long run that matters.