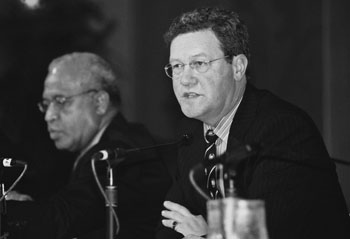 In his recent opinion piece on the Australian Financial Review, former Foreign Minister Alexander Downer commends the opportunities now available to Pacific islanders to work in Australia. But, when he was Minister, Downer publicly opposed the introduction of a Pacific farm labour program. Instead, the Liberals gave rich-country backpackers generous visa incentives to work on farms, meaning that today, even though there is now a Pacific seasonal farm labour program, most of Australia’s fruit is picked by the young people of distant rich countries, rather than the young people of our poor neighbours.

Downer viewed the Pacific too much through an aid lens. In his Financial Review article, he defends successive Australian governments against the accusation that they haven’t taken the Pacific seriously enough by referring to our large Pacific aid programs. But that has been precisely the problem. We have been too slow to promote integration with the Pacific through non-aid instruments.

Yes, AusAID was committed to the Pacific, but it carried little clout with the rest of government. From that perspective, the absorption of AusAID into the Department of Foreign Affairs and Trade (DFAT) has been a huge positive, because DFAT has taken up the cause of the Pacific. Having both more clout with the rest of government, and being more sceptical of the value of aid, DFAT has been more successful at introducing non-aid instruments for the Pacific. And of course now it can play the China card, which gets everyone’s attention. This, combined with strong ministerial championing, explains the recent progress on Pacific labour mobility, and, just in the last few weeks, visa simplification.

And what of our aid to the Pacific? Has it really been as well-designed as Downer claims? The former Foreign Minister might have changed his tune on labour mobility (and on the Solomon Islands intervention he earlier publicly opposed and now defends), but he is nothing but consistent in his views on development and aid.

The two-part argument in his article – that “good governance is the key to economic development” and therefore that aid should focus on training – constitutes what could be called the Downerist approach to aid. The first argument is as orthodox as it is correct. But the second is as naive as it is wrong.

If training and advising (together, technical assistance) could fix problems of governance, the Pacific would be the best governed region in the world. But poor governance is not due to an absence of skills. It has its roots in dysfunctional politics, like the way politicians get elected, and their tolerance for corruption. Aid is notoriously un-influential when it comes to influencing domestic politics.

It is not just that technical assistance is so often a waste of aid. It can do actual harm. There is a workshop culture in the Pacific, with key officials so very often out of their office – often out of the country – on training programs or international gatherings. Aid, especially Australian aid, must take a large chunk of the blame for this.

The continuing focus of the aid program on fixing governance through technical assistance is as much part of Downer’s legacy in the Pacific as is our slow and late start on Pacific labour mobility. “Governance” became the leading aid sector under Downer’s reign. To its credit, Labor gave greater prominence to education. But Bishop cut education hard and, for all her rhetoric about the private sector, restored governance to the dominant position it held under her Liberal predecessor.

An effective aid program needs to accept the uneasy truth that donors have little influence over what, as Downer correctly says, really matters for development: the strength of domestic institutions. Of course, we should try to make a difference where we can, and no one would argue for a technical-assistance-free aid program. But, as a first approximation, we should do things that make sense given the current state of a recipient’s institutions.

China doesn’t always get it right, but one thing that makes its aid so attractive is precisely the pragmatism that it displays, which stands in stark contrast to the hubris we often show with our grand and patently unconvincing plans to strengthen institutions and crack down on corruption.

Whatever one thinks of China’s spreading influence, there is reason to hope that it is reducing Downer’s residual influence on our Pacific and aid policy. First, our desire to remain relevant is reducing the extent we view the Pacific through an aid prism rather than looking for alternative and more effective tools, such as labour mobility. And, second, the perception that China is winning the aid popularity contest may mean that we start taking a more pragmatic and less Downerist approach to our aid program.

This article was first published by the Australian Financial Review.