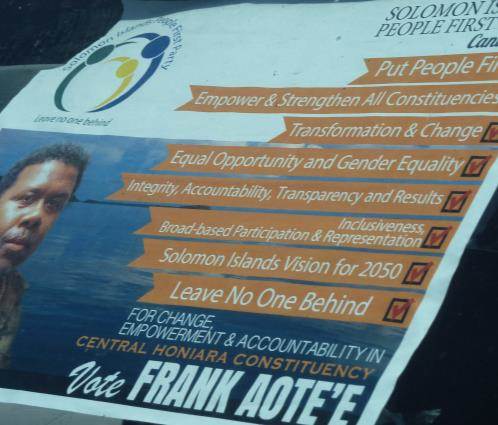 The roads into the hillside suburbs behind Honiara are criss-crossed by small valleys: potholes that have outgrown themselves, small rivers when it rains. They are deep and need careful navigation. As we angled our way amongst them Steve, the taxi driver, talked angrily about politics.

The politicians, they are all corrupt. They make promises, but nothing changes. They take all the money for themselves. There are maybe one or two good ones, but they can’t do anything, and then they become corrupt too.

He was hunched forwards in his seat so he could see under the adhesive tinting that covers the top halves of the windows of most Honiara taxis, and he looked tired. He’d worked, he told me, since 6am. Amidst the heat, the endless traffic jams of Mendana Avenue, and the slow hill-climbs it was dreary work. He was angry:

What we need to do is blow up parliament.

In 2006, when Snyder Rini, an MP with close ties to extractive industries, was announced as Solomon Islands’ prime minister, a protest formed outside parliament, which grew into a riot and the burning of much of the city’s China town. When Gordon Darcy Lilo became prime minister in 2011 there was also protest and rioting, albeit smaller. And although the Tensions (the conflict that occurred from 1998 to 2003) had complex causes, one of the sparks was poor governance.

The Australian-led peacekeeping mission (RAMSI) that arrived in Solomon Islands brought brought the Tensions to an end quickly, and this was a major achievement, but as the country prepares for the first elections in which RAMSI will be only a nominal presence, the Solomon Islands state is frail. It struggles to provide basic services, and maintain roads and wharves. It fails to prevent logging and protect ordinary citizens. And, as was clear from the Honiara floods earlier this year, it isn’t up to managing the challenges of its growing capital city. As the chart below shows, as measured by the World Bank, governance in Solomon Islands improved with RAMSI’s arrival, but little has happened since (the figure I have plotted in the chart is the average across all World Bank indicators). 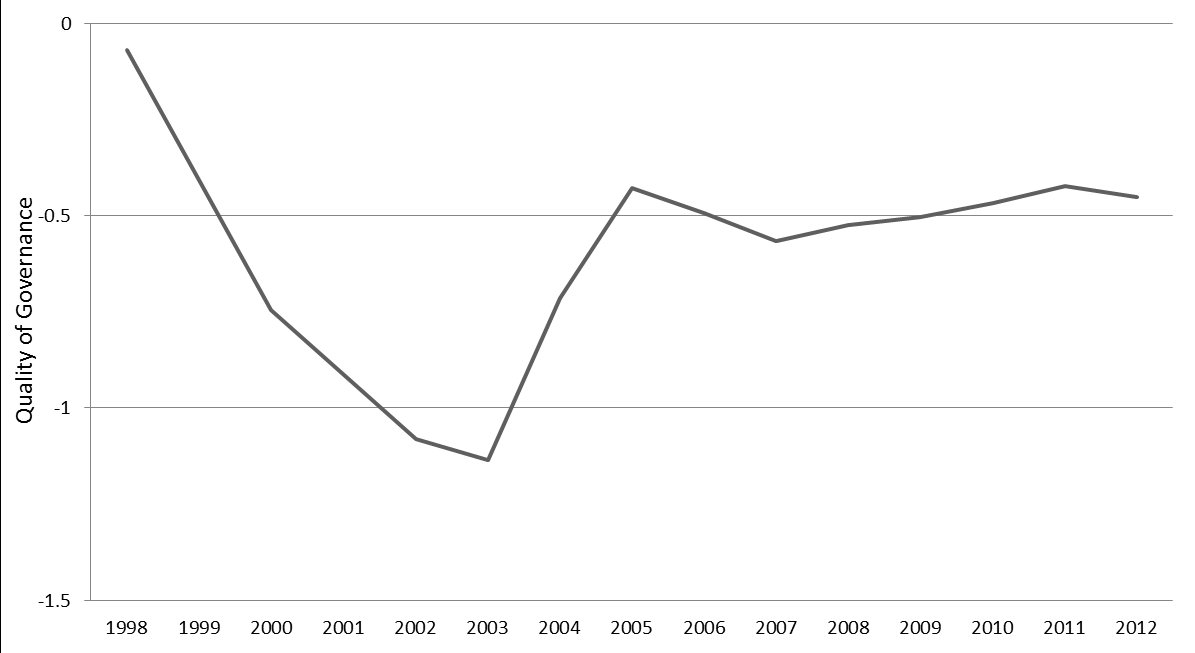 Up to a point, Steve, and the many Solomon Islanders who share his views, are right: politics – and politicians – are at the heart of these problems. As ministers, politicians head government departments and, with occasional, notable exceptions, pay little attention to how they are run, or to accountability processes. As legislators, Solomon Islands’ politicians are responsible for the fact that needed legislation languishes unpassed. And as the recipients of kickbacks from logging and mining companies, some politicians have let some of these businesses take a lot more, and contribute a lot less, than they should.

Yet the story of Solomon Islands’ woes isn’t simply a tale of a corrupt unaccountable elite mismanaging a suffering country. Unlike many developing countries, Solomons has held uninterrupted elections since independence (an achievement in its own right). Elections aren’t completely free and fair – I will discuss some of their problems in a coming post – but the country is no autocracy, and any explanation of why its politicians perform so poorly has to also explain why voters keep voting for candidates who do not run their country well. 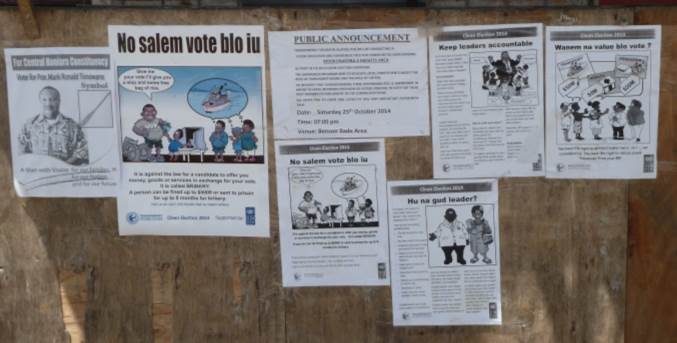 The explanation, in most instances at least, is that most Solomon Islands voters (amongst those who are free to choose) don’t decide who to vote for on the basis of how well their country is being run. What matters is whether the voter thinks the candidate (votes are almost never cast along party lines) will deliver direct benefits to them personally, or to their family or community (for survey evidence on this see here).

Voting this way isn’t voters’ fault. And it does not make the frustration most feel with politics hypocritical. The average Solomon Islands voter has immediate needs, and no experience, amongst the crumbling state they live in, of elections improving their ability to meet them except when a candidate they vote for helps them personally. And they live in a country without strong national political movements or parties, which means that even if they do elect a reforming MP, that MP, as one vote in a parliament of 50, will be able to change very little (for a good discussion of this from World Bank economist Tobias Haque, see here).

And so voting in search of personal gain or local improvements makes sense. The trouble, however, is that the way people vote incentivises MPs to behave in unhelpful ways. To get elected or re-elected requires delivering goods to supporters and potential supporters, which requires money. Often business money, given and spent with quid a pro quo involved, and also public funds – an increasingly large share of government spending in Solomon Islands has been devoted to so-called constituency development work, which MPs have considerable discretionary power over. Needless to say, neither source of funding fits well with a well-governed country.

Voting in search of local benefits also means that MPs who perform poorly on the national stage can do so without fear of electoral punishment. The protest that came with the selection of Rini and Lilo as prime ministers, came because both men are widely thought of as corrupt players on the national stage. And yet they both also continue to get re-elected in their own constituencies. 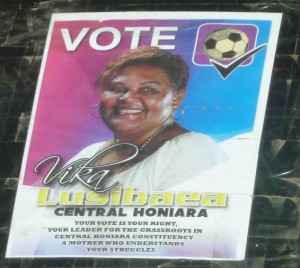 None of this fully exculpates MPs. Some of the corruption Solomon Islands suffers falls far beyond that which can be explained by electoral dynamics. And if you visit parliament when it is sitting you can see the sorts of vehicles MPs own: expensive, ostentatious four-wheel drives. No electoral necessity compels them to purchase these. And yet, the electoral dynamic, and the way it interacts with political economy problems like those stemming from logging money,  goes a long way to explaining the state Solomon Islands is in. It is both a county that has done an admirable job of returning to normal after a nasty conflict, and one showing few signs of being able to escape a political ‘normal’ that deprives most its people of the benefits of development.

On 19 November Solomon Islands will hold its ninth post-independence general election, and amidst the colour and flurry of the campaigning there is a strange mix of ambivalence, frustration and uncertainty.

The two most obvious uncertainties for those of us in the aid and development world are how elections will run and  what might ultimately lead to Solomon Islands finding a healthier political dynamic: where could change come from (these will be the subject of my next two blog posts.)

The foremost question for many Solomon Islanders is simply the one of change. The word itself is common on campaign posters and amongst candidate speeches, but it is hard to find voters who think it will come from the election.

Steve, at least, had stopped his talk of destroying parliament by the time we had navigated our way up the rutted road to the ridgeline where I was staying. Looking more tired than ever he said he would go home to the constituency he is registered in, Malaita, and vote.

But this time we will vote for someone good. Someone better than before.

He said it like he meant it, but also like a man who was uncertain – and worn out by it all.

Terence Wood is a Research Fellow at the Development Policy Centre, ANU. His PhD focused on Solomon Islands electoral politics. Prior to study he worked for the New Zealand Government Aid Programme.