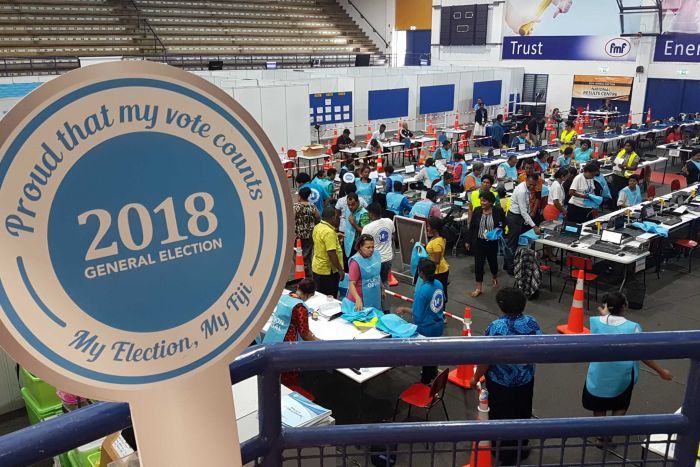 Officials at work in the results centre for the Fiji election (Credit: ABC News/Michael Barnett)

Fiji went to the polls on 14 November in its second election since the restoration of democracy in 2014.

Fiji’s experience with democracy since independence in 1970 has been a tortured one. Three coups have interrupted democratic government in the last thirty years – in 1987, 2000 and 2006 – and the last was followed by eight years of military rule, with Frank Bainimarama as self-appointed Prime Minister. Bainimarama then led his Fiji First party to victory in the 2014 elections and became the elected Prime Minister under a constitution of his own devising. A kind of stability has since settled on Fiji, though the country has not returned to democracy in its fullest sense, that is with a fully independent judiciary and media. Instead, people who cast their vote on 14 November knew that unless they returned the Bainimarama Government, another coup was possible.

The victory of Bainimarama’s Fiji First party was predicted in the polls and likely given the arithmetic of Fiji elections. With a large majority of Indo-Fijians supporting him, Bainimarama needed only to gain the backing of a minority of indigenous Fijians to win. Indo-Fijian voters remain grateful to Bainimarama for overturning a pro-indigenous Fijian government in the 2006 coup, and for abolishing Fiji’s racially-skewed system of voting under which race was a key category. Instead, under the open proportional representation system, the whole of Fiji is a single constituency and voting is open to all Fiji citizens 18 years or over regardless of race. Bainimarama has also endeavoured to introduce a single name for all Fiji citizens, ‘Fijians’, with the term ‘i-Taukei’ reserved for the indigenous population.

The election result was a mild rebuke to Bainimarama’s Fiji First, which looks set to gain a clear majority of about 52%, and a boost for SODELPA (Social Democratic Liberal Party, the successor to the old or Soqosoqo Duavata ni Lewenivanua), which won about 38% of votes. Fiji First gained 59% of the votes in the government elected in 2014, and SODELPA gained 28%. Led by former coup leader from the 1980s, Sitiveni Rabuka, SODELPA has a pro-indigenous political orientation, and receives most of its votes from i-Taukei. But many indigenous Fijians voted for Fiji First in 2014 and did so again this time.

The opposition split between five parties apart from SODELPA. The National Federation Party (NFP) under Biman Prasad had three seats in the last Parliament and will be returned with a similar number this time. The other parties, none of which will be in the present parliament, were the HOPE party led by former NFP leader Tupou Draunidalo; the Unity Fiji Party led by former Reserve Bank Governor Savenaca Narube; and the once powerful Fiji Labour Party which went into the election allied with the Freedom Alliance party and with few prospects of success. The constitution provides that ‘A political party or an independent candidate shall not qualify for any seat in Parliament unless the political party or the independent candidate receives at least 5% of the total number of votes cast’. Given this hurdle, no independents won a seat in 2014, and the trade union-backed People’s Democratic Party (PDP) did not either. The incentive, therefore, was for independents and small parties to merge with a larger party and for 2014 PDP leader Lynda Tabuya to move to SODELPA this time.

The electoral system is one that favours parties with strong and well-known leaders, because a large vote for the leader spreads downward to the benefit of lesser party candidates electing them on his or her coat tails. Hence the focus of Fiji First on the number 688 – the number for Bainimarama – which was endlessly repeated at rallies, Fiji First ‘fun days’ and on social media; and the equivalent focus by SODELPA on 530, Rabuka’s number.

The issues were a mixture of current concerns, traditional disputes, and legacies of Fiji’s recent history. The NFP, for example, promised a living wage of $5 an hour, a guaranteed sugar price of $100 per tonne and higher pensions, ridiculed by Fiji First as so expensive as to bankrupt the country. In similar vein, HOPE promised a living wage of $10 an hour but only if employers wanted to pay it; and Unity Fiji promised free education.

SODELPA under Rabuka articulated a political agenda calculated to appeal to indigenous Fijians, favouring the restitution of the 1997 constitution with its communal, race-based electoral constituencies (though unlikely to achieve such a goal given the obstacles to changing the 2013 constitution); restoring ‘positive discrimination’ towards indigenous students in education scholarships (Rabuka: ‘I will continue to look after everyone according to our races’); and scrapping the equal distribution of rents to all members of the indigenous land-owning groups in favour of restoring chiefly privilege.

Tradition intruded into the campaign in a number of ways. Many indigenous Fijians resent the wholesale control or dismantling of their institutions under Bainimarama. SODELPA stood for restoring the ‘status quo ante’ and tradition, not least in bringing back the Great Council of Chiefs, which was abolished by Bainimarama. Head of the Burebasaga Confederacy, Marama Na Roko Tui Dreketi Ro Teimumu Kepa, complained that Bainimarama broke with custom by excluding the Confederacies in the traditional welcome ceremony of the Duke and Duchess of Sussex on their recent visit to Fiji. She pointed out that, just as Prince Harry was a direct descendant of Queen Victoria, to whom Fiji was ceded in 1874, so she was the direct descendant of the then Roko Tui Dreketi who signed the Deed of Cession as one of the chiefs of Fiji.

And the legacy of Fiji’s recent history could be seen in the way the campaign became a contest between two former military men, both ageing coup makers who seized power and became Prime Minister: Rabuka (70 years old) and Bainimarama (64). Rabuka said he would set up a Truth and Reconciliation Commission to examine recent coups if he won office, while Bainimarama raised questions about Rabuka’s role in the military mutiny of November 2000, when he was widely rumoured to have attempted to take over as military commander. Bainimarama promised stability. Fiji lives with its coups still.

The Fiji Elections Office issues two kinds of results, provisional and final. The provisional results are a real count by polling stations but not one that has been certified by the Elections Office, whereas the final results determine the outcome of the election and the composition of the Parliament. Like other observers, including the Economist, I felt confident in declaring the victory of Bainimarama and his Fiji First party on the basis of the provisional results issued the day after the election and on the basis of more than 70% of the vote count. But when final results from 636 of the 2170 polling stations came in on Friday morning, they showed a surge for support for SODELPA, the largely indigenous party, and suggested that the outcome might be in doubt after all. Rumours swirled in Suva, Fiji’s capital, that SODELPA would be the victor, and it was unclear what part of the country the count was coming from. The Northern and Eastern Divisions would favour SODELPA, the Western Division would favour Fiji First, and the Central Division might well split evenly.

With 78.92% of votes counted by Saturday morning, my earlier faith in the provisional count appears to have been justified. Fiji First now has 49.93% of the vote, entitling it to a probable 27 seats in the 51-seat parliament (a clear majority) and SODELPA 39.96% with a probable 21 seats. The overall final result is therefore likely to be as I thought, though probably with a less decisive victory for Bainimarama and a bigger swing to SODELPA. The National Federation Party will almost certainly have the same number of seats in the new parliament – three – as in the last. These trends point above all to a large movement of I Taukei (indigenous Fijians) away from the governing party to SODELPA, likely driven by concerns about the cost of living and the perceived neglect by the government of Fiji’s traditional institutions. It would appear that the vote for Fiji First by Fijians of Indian descent (80% in 2014) has remained high and has played the key role in returning Bainimarama to the office of Prime Minister. For absolute certainty, we await the final declaration of all results early next week – Stewart Firth.

With results from all polling stations officially counted and the writs of election returned to the President, Jioji Konrote, the final result of the Fiji election gives Fiji First 50.02% of the vote, SODELPA 39.85% and the National Federation Party 7.38%. The victory for Fiji First gives it 27 seats in the new parliament (down from 32), SODELPA 21 (up from 15) and the National Federation Party three seats, as before. Frank Bainimarama, who remains Prime Minister, has welcomed the result of what he calls ‘the country’s second only truly democratic election process’, a reference to the race-blind system of proportional representation introduced in 2014. The Fiji First party attracted their highest vote from the Western Division, accounting for 40.44 per cent (91,902) of their 227,241 votes in the 2018 General Election. Nadi, Lautoka and Ba – towns with a large proportion of Fijians of Indian descent – are located in the Western Division, suggesting that the Fiji Indian vote was again crucial in ensuring the return of Bainimarama and his party – Stewart Firth.