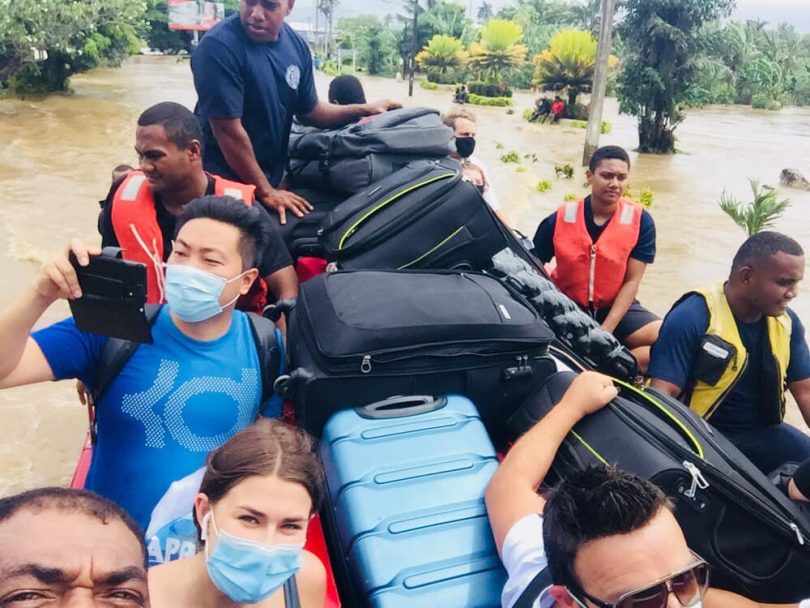 Tourists being transported to the Nadi airport during this month’s floods (Aseri, Sunny Beach Tours Fiji/Facebook)

Fiji took over the chairing of the Pacific Islands Forum (PIF) last year, and Fiji’s PM Frank Bainimarama is hoping to host an in-person Forum Leaders Retreat in Fiji soon. After two years of leaders’ meetings via Zoom, the opportunity to meet in person will be valued. But whether it will go ahead, with the Omicron variant causing a third wave of COVID-19 across Fiji, remains to be seen – the planned February meeting was recently rescheduled to April.

High on the agenda will be the presentation of the 2050 Strategy for the Blue Pacific Continent. Of greater practical relevance will be whether anything can be done to prevent the scheduled withdrawal by five Micronesian states over the appointment of the PIF Secretary-General a year ago.

Despite informal encouragement to Micronesian leaders to stay, Palau is adamant it will pull out, and the other countries – the Marshall Islands, Federated States of Micronesia, Kiribati and Nauru – are yet to show a change of heart despite the Forum’s attempts at mediation. If Fiji as chair can get these countries, or even some of them, to stay, that will be a major achievement. Otherwise, Fiji will find itself chairing a regional body of greatly reduced relevance and reach.

2022 is also an election year for Fiji and, although the election is not expected until November, electioneering in the nation is already mired in controversy. Last year, the Supervisor of Elections (SOE) attempted to de-register a long-time opposition member of parliament, Niko Nawaikula. He was expelled from parliament after the SOE removed his name from the National Register of Voters, on the grounds that Nawaikula had registered under his common name, used since childhood, and not his birth certificate name.

Nawaikula appealed the loss of his parliamentary seat to the courts and won. The person who paid the price was the Solicitor-General Sharvada Sharma, an officer with 24 years of legal service to the Fiji government, ten of those as Solicitor-General. He had represented the government on the Nawaikula case. Suspended first for ‘misbehaviour’, Sharma was then terminated without pay by Fiji’s outgoing President Major Jioji Konrote, without the constitutionally required opportunity to defend himself.

The complaint of ‘misbehaviour’, according to Sharma’s lawyer Richard Naidu, came from Fiji’s SOE, Mohammed Saneem, a junior lawyer prior to his appointment by the FijiFirst government as Supervisor in 2014. The Solicitor-General is challenging his termination and his case is currently before the courts.

Also controversial are the 2020 amendments to the Electoral Registration of Voters Act, which requires people registering to vote to use their full name as specified in their birth certificate. While tabling the electoral bill for debate in parliament in September last year, Fiji’s Attorney-General Aiyaz Sayed-Khaiyum said changes were necessary following the ruling in Nawaikula’s case.

With less than a year to elections, this would disenfranchise thousands of women.

With Indo-Fijians now making up only 34% of the Fijian population, the November election will mainly be decided by the iTaukei vote (62%). The last election in 2018 was narrowly won by the incumbent FijiFirst party. It won 27 seats to the 21 of the Social Democratic Liberal Party (SODELPA) and the three of the National Federation Party (NFP).

Given that Bainimarama has been in power for 16 years, and the widespread dissatisfaction with service delivery, the economy and governance, one might expect the elections to lead to a change. However, it is not that simple.

There are currently eight registered parties in Fiji, up from seven at the time of the last elections. The opposition is made up of SODELPA and NFP and five others: the newly registered The People’s Alliance (comprising disgruntled members of SODELPA led by the 1987 coup leader and former PM Sitiveni Rabuka and his faction), the smaller Unity Fiji, the Fiji Labour Party, HOPE, and Freedom Alliance (registered since 2014 but yet to field candidates).

Fiji’s current open list proportional representation electoral system prevents parties from winning a single seat unless they reach a 5% threshold of all votes cast. Votes for minor opposition parties might therefore end up protecting the government.

How FijiFirst goes in the election will also depend on the state of the economy and on progress in 2022 in relation to the pandemic. Fiji suffered from a very high case load last year, but then did well with vaccination. It remains to be seen, however, how well the country will do with boosters and suppressing Omicron. In turn, that will decide how long borders, which were reopened to tourists on 1 December 2021, will stay open.

Fiji has been among the Pacific economies hardest hit by COVID-19 because of its heavy reliance on tourism. The reopening of borders to tourists started well. The Tourism Fiji Open for Happiness campaign was well received in targeted markets, and resorts and cruises quickly booked to capacity. However, the discovery of Omicron days before Fiji reopened has added uncertainty to the equation.

It is early days yet with the third wave, and outcomes will depend on the control of numbers affected, and the severity of cases. 92.4% of the population is fully vaccinated, and boosters have started. However, Fiji is yet to vaccinate all its primary school aged children.

Damage, death and injuries from widespread flash floods linked to this month’s Tropical Cyclone Cody have placed further stress on the nation’s morale and its already fragile economy.

Both on the regional front and domestically, 2022 will be a big year for Fiji. Prospects for success for PM Bainimarama – who, it has just been revealed, has been undergoing urgent heart surgery in Australia – are hard to predict.