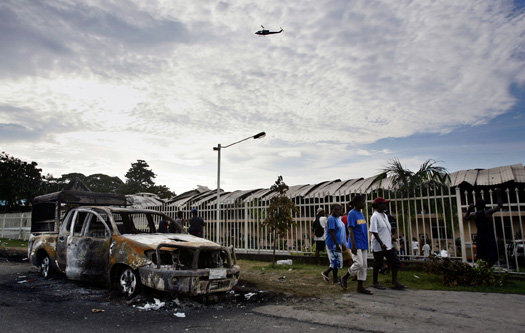 At the height of the ethnic tensions in Solomon Islands, in 2000, the Solomon Islands Christian Association requested that a Truth and Reconciliation Commission be established. Further to the passage of an Act of Parliament in 2008, this came about in 2009. In February of 2012 the Commission presented its five-volume report to Prime Minister Gordon Darcy Lilo. Under the terms of the governing Act, ‘The Prime Minister on receiving the report of the Commission, shall cause it to be laid before Parliament and the report be made available to the public’ (s 17). On April 28th 2013 Bishop Terry Brown, who was not one of the five Commissioners but the editor of the final report, released the document to around sixty individuals and selected media outlets. It is now available online here.

Why did Bishop Brown take such a drastic step, in relation to such a sensitive report? In an accompanying press release, he states: ‘The Report is very accurate and comprehensive and gives proper recognition to the victims of the conflict whose stories should be heard. It is not good enough to forgive the perpetrators and forget the victims, which seems to the approach of the Government. I feel strongly about this as I too lived through this period of Solomon Islands history and was a participant in the tragedy of those times’.

The government of Solomon Islands had resisted calls to release the report before now, citing its size (it is 1,300 pages long) and its sensitivity. The prime minister has claimed that to release the report as delivered could reignite ethnic tensions in the country and it has been suggested by some sources that a sanitised version of the report was being prepared for submission to Parliament and public release.

So how has the release of the report been received? Given its significance, the coverage and commentary appears somewhat muted. This may be because people are still accessing, reading and digesting the material. In addition, its release coincided with the unexpected demise of Walter Nalangu, a leading member of the media community in Solomon Islands, whose funeral was held yesterday. However, there has been some coverage in international media.

Closer to home, the active advocacy group Forum Solomon Islands International reflects a range of views about the report and the means by which it has entered the public domain. The group’s administrators elected not to publish the report themselves and placed an embargo on members doing so. But elsewhere on the group’s Facebook page, Bishop Terry Brown posted his press release and subsequently received a large number of requests for copies of the report. Views expressed range from support for the bishop’s actions through to criticisms that what he has done constitutes an attempt to undermine the sovereignty of Solomon Islands.

In terms of official response, the chair of the Commission, Fr Sam Ata, told Solomon Islands Broadcasting Commission that the report had been released without the knowledge of the commissioners. He has also expressed his concerns that if real healing is to take place in the country, the support of government will be needed. Elsewhere, the Attorney-General, Billy Titiulu, has described Bishop Brown’s actions as ‘totally irresponsible’.

This event comes at a critical juncture with RAMSI scaling down and in the lead up to general elections in Solomon Islands in 2014. Even a brief reading of the report indicates that what it contains will be challenging on numerous levels. There are indications that the social, mental and emotional impacts of trauma experienced during the tensions continue to affect the people of Solomon Islands. Whether having access to the final report of the Truth and Reconciliation Commission will assist in individual and community healing remains to be seen.