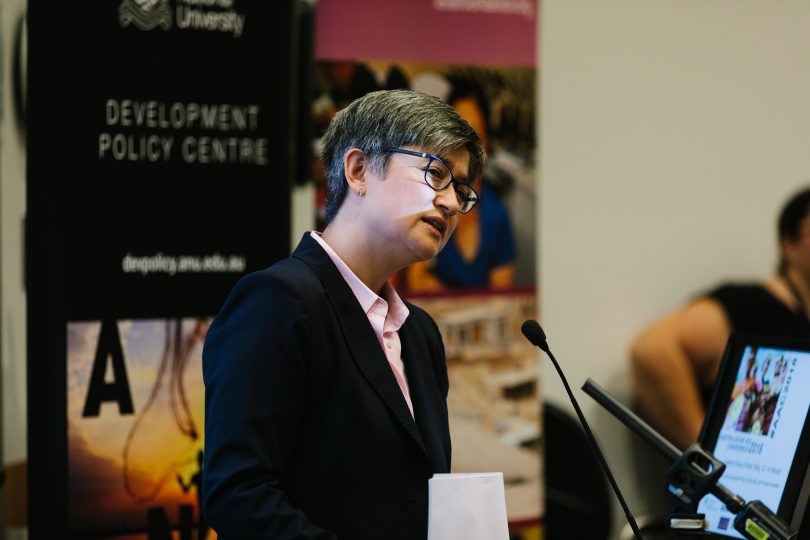 Now in its 5th year, the Australasian Aid Conference held at the Australian National University in Canberra on February 12-14, was more robust and urgent than ever. With record attendance, 34 parallel sessions, three plenaries, and a keynote address, the AAC, organised by the Development Policy Centre in partnership with The Asia Foundation, has evolved into the go-to event for rigorous debate and learning on development cooperation policy and practice in the Indo-Pacific region. Here are five highlights from this year’s conference.

Senate Opposition Leader Penny Wong spoke at the aid conference and threw down the gauntlet, challenging the current Coalition party’s sharp reduction in aid. Since the Coalition came to power in 2013, more than $11 billion has been cut from Australia’s aid program. The dynamic Ms Wong opened the conference, envisaging the return of a Labor government in which development assistance would be central to Australia’s government to realise its foreign policy priorities. She criticised the Coalition government cuts, saying they have “harmed our efforts to alleviate poverty, and make our region safer and more secure.”  She recognised that trends such as the growth of non-traditional donors, rising global inequality, and an unprecedented crisis of displaced persons, have created a challenging development cooperation landscape. Against this backdrop, she affirmed Labor’s commitment to the Sustainable Development Goals (SDGs), promised more aid dollars, and prioritised environmental resilience, health, education, gender, and innovation for the future Australian aid program.

Targeting “strugglers”: those unable to move from poverty to middle class

Nancy Birdsall, President Emeritus of the Center for Global Development, challenged conference participants to consider a new analytical approach to understanding poverty. In the 21st century, despite millions having been lifted out of poverty and the existence of a growing middle class, there remains a vulnerable group — the so-called “strugglers” — who are no-longer-poor, but not yet middle class. Strugglers have achieved a per capita household income of between $4-10 a day but have a 40 percent risk of falling back below the $2 a day poverty line. By 2030, strugglers will comprise 60 percent of the world’s vulnerable. The majority of strugglers live in middle-income countries, like India and Brazil, and many work in the informal sector. Birdsall argued that inclusive growth and the development of effective states requires aid solutions that target strugglers with services, opportunities, and progressive tax systems, in order to launch them securely into the middle class, where they can become drivers of growth and agents of political change.

The plenary panel featuring civil society experts from China, India, Japan, and Korea revealed that the traditional, state-led approach of Asian development cooperation is modulating into one that includes and shares responsibility with non-governmental and private-sector organisations. Chinese NGOs are active in 28 countries in humanitarian assistance, health services, poverty alleviation, education, and international exchanges. 400 Japanese and 300 Korean NGOs engage in overseas development work. Although India has roughly 3 million NGOs, their strict government regulations limit their international programs. Speakers noted that governments play a deciding role in either enabling or stifling the ability of their national civil society organisations (CSOs) and NGOs to engage in international work. Governments can maximise NGO partnerships if they 1) offer capacity-building, particularly in project management and implementation; 2) streamline institutional architecture for clear and dedicated coordination with NGOs; 3) ease rather than tighten the regulatory environment; and 4) enhance policy dialogue and knowledge-sharing with CSOs on development cooperation strategies. At the same time, speakers pointed out that Asian CSOs must become business-minded and outward-looking to maintain autonomy and ensure sustainability.

The 3-Minute Aid Pitch, launched for the first time at last year’s conference, returned with a second round of energising and inspiring pitches for innovations and disruptions in the aid sector. The conference’s 500+ participants voted for their favourite aid idea or solution. This year’s ten speakers pitched topics such as “Aussie rules” for humanitarian assistance, establishing a professional aid lobby, and sex and sexuality as an economic, political and social development issue. The winning pitch by Rosanna Duncan argued for the benefits of diversifying talent in the aid industry and presented solid strategies to do so.

The above sessions were all plenaries, but most of the conference was spent in parallel sessions organised around papers and panels submitted by panel participants. This “bottom-up” nature of the conference is one of its great strengths and is an interesting barometer of development thinking and trends. This year, politics and “doing development differently” dominated, with parallel sessions on “inside the black box of political will,” “gender and politics in practice,” “adaptive programming in theory and practice,” “churches as agents of social change,” “aid, politics and governance,” and “thinking politically and working differently.” These sessions featured a rich mix of case studies, practitioner perspectives, and robust debate. The growth in the number of sessions focused on politics, and the significant audience interest (these sessions were among the most popular outside the plenaries and keynotes), shows that development practitioners are well aware that local politics impact how we do our work, and how effectively we can engage in the development process. While in the past there may have been a reluctance by those delivering aid to get their hands dirty by dealing with politics head on, there seems to be a growing and broad-based understanding that persistent issues such as corruption and gender inequality cannot be decoupled from the political and social contexts in which they exist.

This post is published in partnership with The Asia Foundation’s In Asia Blog.

The views and opinions expressed here are those of the author and not those of The Asia Foundation or its funders.