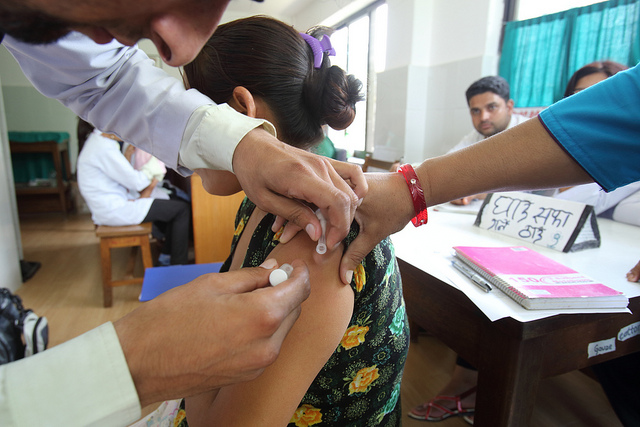 From soil on your shoes to a simple piece of fruit, Australia’s government maintains a long and exhaustive list of things you’re not allowed to bring into the country. But even our notoriously strict biosecurity rules can’t keep out germs, as recent alerts around possible Ebola and Zika cases prove.

Outbreaks like these are forcing people to think differently about how best to control disease. In this age of travel, trade and changing climate, people and diseases can pass through checkpoints, overseas and from state to state with almost the same speed as email. But we can stop many of these at source, through the power of vaccination.

In Australia we have known this for a long time. Since the 1950s, we have been strong supporters of immunisation both at home and abroad, helping to minimise or even eliminate diseases like smallpox, polio and rubella. We now continue to be vigilant against damaging diseases in our own backyard, whether it’s raising awareness of mosquito-borne Ross River virus, or urging parents to maintain high vaccination levels to protect against super-contagious measles and whooping cough.

Our country has led the way in disease prevention in other ways too. In the 1970s, a Melbourne team identified the deadly rotavirus, which is a major cause of childhood diarrhoea. Their work paved the way for a rotavirus vaccine, which now helps to prevent one of the biggest global killers of children under age five. More recently, Queenslander Ian Frazer helped to invent the first human papillomavirus vaccine, which protects against the cause of most cervical cancers.

Through our combination of fantastic vaccine research and direct support for immunisation around the world, Australia is helping to save millions of lives. Our modern, highly mobile, world demands that we think beyond our own borders. Prevention is better than cure, but many poorer countries cannot always afford to prepare for or contain outbreaks by themselves. This is especially troublesome given that infectious diseases may be more likely to emerge and spread in countries where conflict, limited health care, poor nutrition and higher levels of poverty are often a fact of life.

Since 2006, when we began funding Gavi, the Vaccine Alliance through our overseas aid program, Australia has recognised this, extending immunisation support to countries in need including some of our nearest neighbours. For example, one of the biggest measles and rubella vaccination campaigns ever undertaken is about to start in Indonesia (immunising 70 million children), and Papua New Guinea has managed to protect many children from polio, measles and other diseases.

Australia’s vaccine support helps poorer countries around the world establish strong routine immunisation programs that consistently help prevent known diseases, while helping countries prepare their health systems for unknown threats too. This is because systems that support the delivery, data collection and monitoring of routine vaccination can also help countries identify and respond to other health threats. Not only does immunisation give vulnerable children the healthy start in life they deserve, but it also stops diseases from spreading and landing on our own doorstep.

This World Immunisation Week, Australians can be proud of their role in vaccination at home and abroad. By both ensuring that our families get their shots, and supporting the Australian government’s commitment to funding immunisation overseas, we can all do our bit to stop outbreaks before they happen. As the threat of epidemics and vaccine preventable diseases persists, continuing to invest in immunisation beyond our borders will protect us all.

Helen Evans AO served as Deputy CEO at Gavi, The Vaccine Alliance based in Geneva from 2009 until her retirement in 2014. She currently has an honorary appointment as Associate Professor at the Nossal Institute for Global Health at the University of Melbourne.

Helen was also a finalist for the 2017 Mitchell Humanitarian Award; read the Aid Profile about her life and work here.

Helen Evans AO served as Deputy CEO at Gavi, The Vaccine Alliance based in Geneva from 2009 until her retirement in 2014. Prior to joining Gavi, she served as Deputy Executive Director at the Global Fund to Fight AIDS, Tuberculosis and Malaria, also based in Geneva, between 2005 and 2009. She brings to the TERG a depth of experience in global health policy and strategy development, the three diseases and working in public private partnerships to deliver results. In the early 1990s Helen managed the National Communicable Diseases Program in the Australian Department of Health. For the seven years prior to moving to Geneva she headed up the Australian Government Office for Aboriginal and Torres Strait Islander Health.

Now living in Melbourne she currently has an honorary appointment as Associate Professor at the Nossal Institute for Global Health at the University of Melbourne.