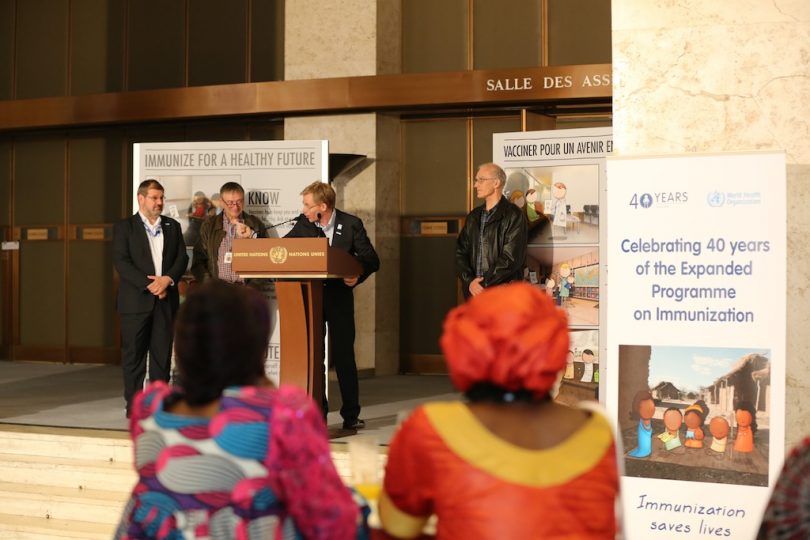 Each year, World Immunisation Week is also the week of ANZAC Day, when we acknowledge the achievements and sacrifices of our military personnel. In 2018, two 100th anniversaries remind us that infectious diseases have taken, and still take, a greater toll than the loss of life in warfare:

It is also a time to remember the millions of preventable deaths that occur today due to poor health and nutrition, and to promote action to prevent these deaths.

Immunisation is one of the most successful and cost-effective health interventions. Expanding access to immunisation is crucial to achieving the Sustainable Development Goal of healthy lives for all people at all ages. Currently, immunisation prevents the deaths of an estimated two to three million people per year, but three million people, including 1.5 million children up to the age of five, still die from vaccine-preventable diseases each year.

More than 19 million children in the world are either un-vaccinated or under-vaccinated, putting them at serious risk of potentially deadly diseases. Of these children, at least one in ten do not have any access to the health system.

Gavi, the Vaccine Alliance, has helped immunise 700 million people and save ten million lives since it was founded in 2001. Gavi has helped bring new vaccines, including the new Ebola vaccine, to people living in low income countries.

Australia maintained its support to Gavi at $250 million over five years during the last Gavi replenishment in January 2015. That was part of funding of $US 7.5 billion over five years which enables Gavi to save the lives of one to two million children per year through immunisation programs. Continuing to invest in Gavi helps safeguard the health of children and prevent epidemics around the globe.

Polio eradication action shows both the benefits and the risks of success. Over the last 30 years, the Global Polio Eradication Initiative (GPEI) has helped prevent millions of cases and save an estimated 16 million people from paralysis. In 2018 so far, only eight cases of polio in Afghanistan and Pakistan have occurred.

During the 2014 Ebola epidemic, staff trained by GPEI programs to trace polio were able to mobilise and identify people who were at risk, which helped to stop the spread of Ebola in Nigeria quickly.

The success of polio campaigns means that dedicated eradication funding will wind down around the world in the next three to five years, and countries must prepare to maintain the other health system functions, including immunisation, with other domestic and donor funding. Two major 2017 research reports by ACTION (a global health advocacy partnership of which RESULTS is a partner) – A Balancing Act: risks and opportunities as polio and its funding disappears and Progress in Peril? The Changing Landscape of Global Health Financing – set out proposed responsibilities for national governments, multilateral agencies, and bilateral aid donors, to ensure transition does not reduce resources for health programs.

Two events in 2018 will increase attention to the progress we are making in ensuring all children have access to vaccinations:

Seeking to accelerate vaccine availability and assisting countries to manage the transition to reduced support from Gavi and GPEI will be an essential part of winning the war against diseases that still claim too many lives.

We have made great strides since the testing of the BCG vaccine for TB in 1921. Since then we have adopted, in many countries, vaccinations against about 15 other diseases affecting children, saving millions of lives. While we still have a lot of work to do to ensure people everywhere have access to routine immunisations, we can celebrate nearly a century of innovation to protect children this World Immunisation Week.