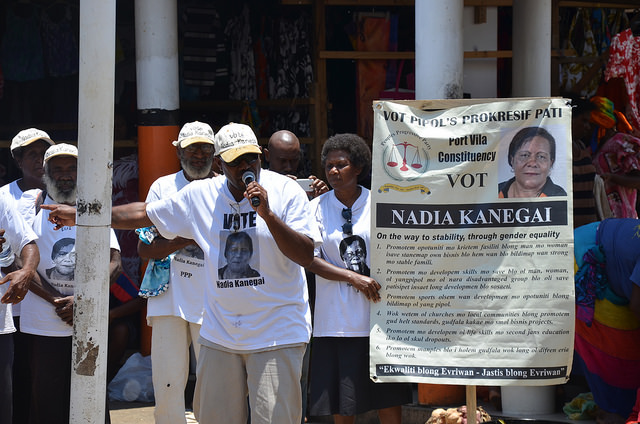 Nowhere in the world is the under-representation of women in leadership positions, especially in formal politics, more acute than in the Pacific islands region. Just one in 20 Pacific parliamentarians are women. While 2016 saw some significant progress in this area – Hilda Heine of Marshall Islands won the presidency in January, Fiame Naomi Mata’afa of Samoa was appointed Deputy Prime Minister in March, and the number of Pacific states with no women in their lower (or only) houses of parliament was halved from four to two – the region still has the dubious distinction of having the lowest level of women’s representation in the world. In the Melanesian states of Papua New Guinea, Solomon Islands and Vanuatu, just four out of 213 (2 per cent) parliamentarians are women.

The under-representation of women in Pacific politics reflects a range of structural, cultural and economic factors. In Melanesia, development partners have committed significant resources towards the goal of enhancing women’s political representation, yet such support has not significantly improved women’s electoral performances and, consequently, has not led to higher women’s representation in Melanesian parliaments. This is partly because structural impediments are difficult to overcome. But it is also arguably because development partner assistance has not been effectively targeted to help women better address certain obstacles. One reason for this is that support programs have not consistently or effectively drawn on available evidence regarding factors that contribute to electoral success in the region.

While there are significant gaps in the evidence base, the research points to a number of qualities shared by successful male and female candidates:

A new approach to development partner support would be to draw on the extant evidence base to help women try and learn from and replicate some of the campaign approaches known to make a difference.

An evidence-based approach would:

Such an approach entails challenges for development partners. Not the least, supporting women candidates poses risks for development partners who may be accused of political interference. More effective support therefore requires the development of robust governance structures that can support strong local ownership, including by local male champions. It also requires the development of new, more flexible program structures and innovative support modalities to help women engage with the complex political economies of Melanesian elections, and tailor campaign strategies to the local level. Such modalities could include research partnerships with academic institutions to support women candidates to undertake electorate-level political economy analyses; mentoring resources so that women candidates can develop strategic campaign plans early in the electoral cycle (drawing on political economy research); and support for strengthened regional partnerships with INGOs to help women develop more innovative finance strategies. With flexibility, a long-term approach, and a greater tolerance for political risk, programming for increasing women’s political representation in Melanesia could see real rewards.

Based on this evidence and with funding from the Australian Government through the Pacific Women Shaping Pacific Development program, the State, Society and Governance in Melanesia Program at the Australian National University last month commenced a five-year PNG Women in Leadership Support Program. The Program will take a long-term approach to supporting women’s political participation in Papua New Guinea by enhancing their competitiveness in elections.

Julien Barbara is a Senior Policy Fellow and Kerryn Baker a Research Fellow with the State, Society and Governance in Melanesia (SSGM) Program at ANU.

This blog post is adapted from a synthesis report: ‘Improving women’s electoral chances through an evidence-based approach’. The report draws on discussions that occurred at a three-day workshop hosted by the Centre for Democratic Institutions (CDI) and the State, Society and Governance in Melanesia Program (SSGM) at the Australian National University in Canberra in June 2016. The report is supplemented by a series of SSGM In Briefs (2016/34–2016/41).