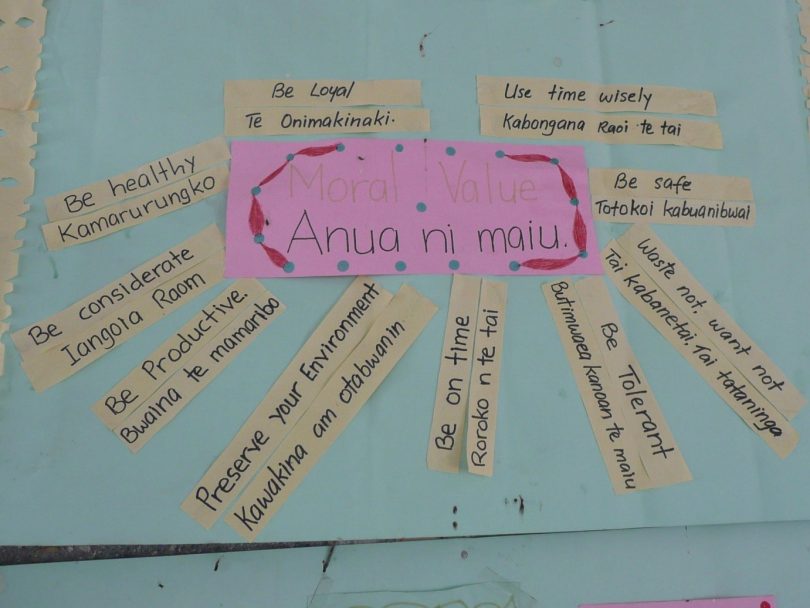 On the 21st of February 1952, political activists and students at Dhaka University in East Pakistan (now Bangladesh) were demonstrating about the imposition of Urdu as the national language on the Bengali-speaking population. Police opened fire on the protestors and dozens were killed. The simple monument built on that spot to remember those who died in the independence movement symbolises a mother and her children. It is still a focus of protest – on the day I visited, there was a protest for the rights (including language rights) of the indigenous Chittagong hill tribes.

February 21 was chosen by UNESCO for International Mother Language Day, and has been observed worldwide since 2000. This year’s theme is ‘Linguistic diversity and multilingualism count for sustainable development’.

The symbolic power of language was described by French sociologist Pierre Bourdieu in 1982: language is not only used for communication but also as a means of power. This extends to ‘symbolic violence’ when the power of a dominant group is seen as natural and used as a form of social control, as in the case where minority languages are suppressed. Minority groups are less likely to have access to the language required for education and employment, resulting in lower levels of development, which can result in conflict.

For those of us who grew up speaking English in a rich country where the national language is English, the schools are 99% English-medium, and nearly all public life is carried out through English, this seems to be the natural way. I call this the ‘English juggernaut’ to signify its huge, almost religious, power and force. As its use advances across the globe, English can crush the use of other languages, particularly in education and in public life. Together with local languages, English has official status in all the non-francophone countries of the Pacific, and the push for its increased use in education can be strong.

A few years ago in a Vanuatu primary school I took this picture of a student wearing a ‘I must speak in English’ dunce card as a punishment. 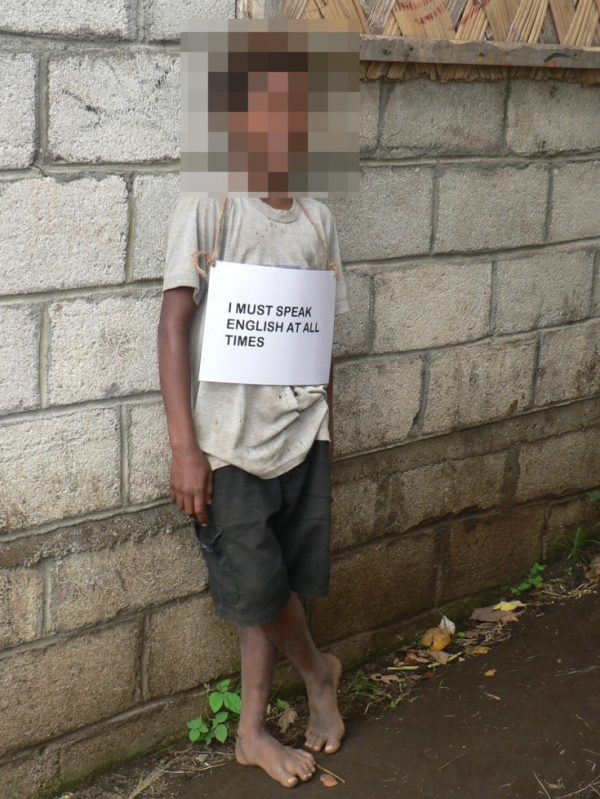 I was conflicted about taking the photograph because I did not want it to seem as though I agreed with either the policy or the punishment, which is why I have blanked out the student’s face and not used his name. The intentions of the teacher were no doubt to ensure that he followed school rules and achieved well in his studies, through English. But the shiny newly laminated sign is a contrast with the poverty shown in his clothing (unusual among the other students at the school), and to me highlights the problems with the policy.

We know from the stories of Indigenous peoples in Australia the long-term devastating psychological effects on children and families when their language has been forbidden in school – it is a denial of their identity and culture, and can result in intergenerational trauma. Parents may become complicit in the policy, to prevent their children from punishment at school and because they have been told that this is the way their children will achieve success in a changing world. This also applies when adults cannot use their language, at work or other public situations. When we insist that they use English (or any other language) we are denying their identity, and putting an invisible dunce card around their necks.

Language issues can be addressed in a way that contributes to social cohesion. A four-year Language, Education and Social Cohesion initiative in Malaysia, Myanmar and Thailand used a community-based process of dialogue on language in education to foster peacebuilding among minority groups. A key focus of the project was Mother Tongue-Based Multilingual Education (MTB-MLE). In this approach, children begin school in the language they speak, before adding in the national language and then another ‘international’ language such as English.

The evidence is increasingly strong for MTB-MLE, and is called by UNESCO ‘the key to unlocking Sustainable Development Goal 4’: quality education for all. Since education is essential for all other goals, it underpins sustainable development. It is simply not an option for most children in the world to say ‘I’m not good at languages’, and often they must study in a largely unknown language from the day they enter school. If children can understand their teacher, they learn more and stay in school longer. These improved outcomes mean that MTB-MLE is a cost-effective approach.

When a mother-tongue based approach is introduced, the culture and values of the whole community are validated. I have seen this in a madrasah (Islamic religious school) in Nepal – the pride of the parents in the girls’ singing performance was clear. Another benefit was that the children’s mothers felt comfortable coming into public for the first time, and could benefit from other development initiatives such as health promotion. 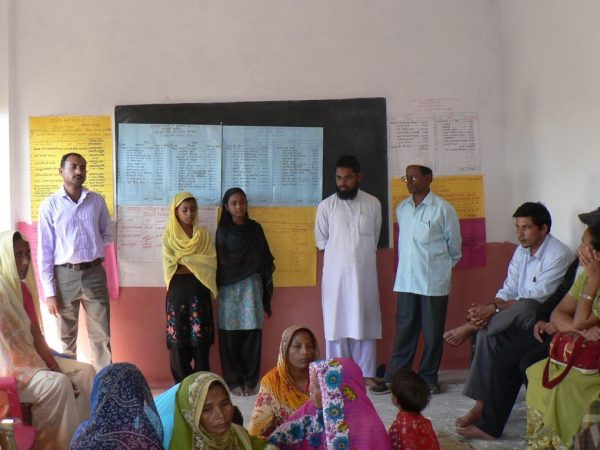 In the South Pacific, where some language groups are very small, there are logistical challenges to the implementation of a mother tongue-based approach. However, this chapter of the ongoing language policy story in Vanuatu ends well – if not for the boy in the picture, then at least for others coming along after him – because from 2016, Vanuatu introduced a new language policy. Children start learning through their mother tongues or the lingua franca Bislama, before adding in English or French as the second language, and then French or English as the third language. It is an ambitious project, requiring the production of resources and pedagogical materials for 60 languages, but it will have clear benefits if it is well supported.

Many policy-makers and donors do not know of the evidence supporting mother-tongue education, and remain unaware of language as a key issue in sustainable development. I hope that this International Mother Language Day can help refocus our attention from how language diversity can be a source of social conflict, to how multilingualism can be a force for social cohesion.

Hilary Smith has an applied linguistics in education background, with over 30 years of teaching and researching in New Zealand, the Pacific and Southeast Asia. She has lived in Tonga, Papua Guinea, and Lao PDR, and has also worked in Indonesia, Kiribati, Vanuatu, and Solomon Islands. She has carried out shorter term projects in Nepal, Thailand, and Timor-Leste.

Hilary's academic focus is on education in multilingual and developing country contexts, with particular expertise in English language education, and innovative methods for measuring attitudes.

She is an Honorary Affiliate of the College of Arts and Social Sciences at the ANU, Honorary Research Fellow in the School of Humanities at Massey University, and Director of Systemetrics Research Associates.