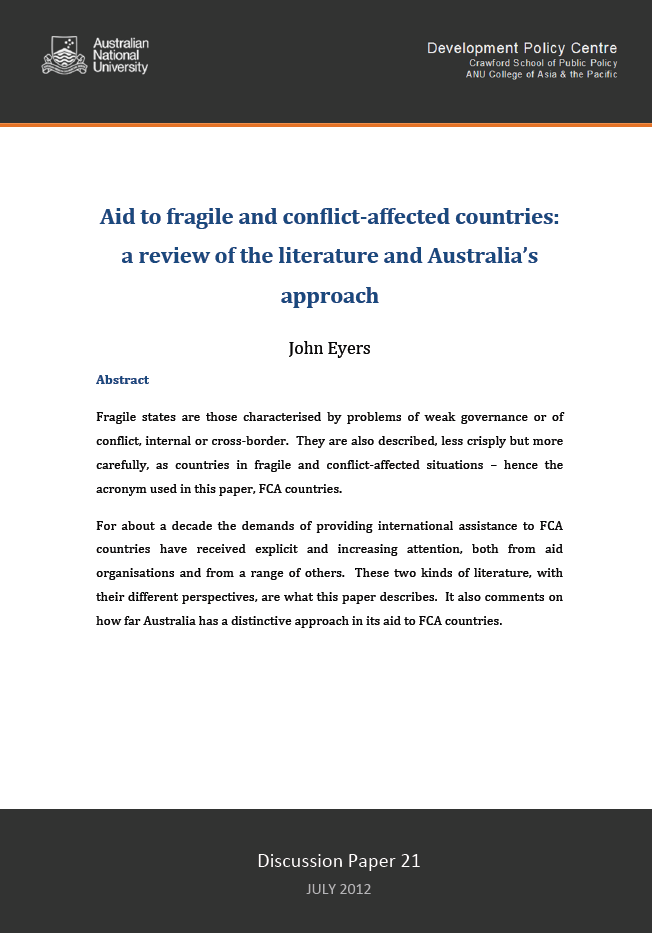 For more than a decade Australia has had an aid program concentrated on giving assistance to fragile and conflict-affected countries – looking for ways, adapted to each country’s situation, of helping to address sources of internal conflict and of improving, or at least not further weakening, state institutions.

In a new discussion paper for the Development Policy Centre, I’ve noted some distinctive features of this Australian aid to fragile and conflict-affected countries, in the context of  international literature by aid providers and others about such aid.  Australia’s aid, especially to Timor‑Leste, the Solomon Islands, Papua New Guinea and Afghanistan, has been notable for:

I was involved in whole-of-government aid for a period in the mid‑2000s as an Australian Treasury official, and saw for myself how it was both potent and problematic.  I was struck by how effective it proved when it put capacity behind purposeful local leaders.  I also remember the mixed responses of AusAID’s teams of managing contractors and consultants – some eager to grasp the new opportunities, others threatened and resentful.  I was interested to see how this would play out in the evaluation reviews which AusAID’s Office of Development Effectiveness (ODE) launched in 2007, and in the interdepartmental committees implementing the whole‑of‑government approach, notably the Development Effectiveness Steering Committee (DESC).

Unfortunately ODE’s attention was soon channelled in different directions, and the DESC has remained invisible and silent for people outside the government. In an annex to my paper for Devpolicy, I summarised the range of published evaluations or reviews of Australia’s aid to fragile and conflict‑affected countries.  All of these are informative, but readers get little help in forming a picture of what types of aid have proven most effective in these countries.  I could see no direct attention given to comparing the effectiveness of aid to these countries with Australia’s other aid.  It also seems little attention has been given – and less as time has gone by – to comparing the effectiveness of whole‑of‑government and conventional aid.

In May an Independent Evaluation Committee was established to review the effectiveness of all of Australia’s aid, as the Independent Aid Review had recommended a year earlier.  In my paper for Devpolicy I made, in effect, an appeal to it:

… let’s hope that independent reviews of Australia’s aid to fragile and conflict‑affected countries will continue to be done – but with a more comparative perspective, with more systematic follow‑through from year to year, with more evaluation of parts played by agencies other than AusAID, and with more prompt publication.

If we hope for this we might also hope – again, as the Independent Aid Review recommended – that the Australian Parliament will form a committee or sub‑committee on aid and development, such as a sub‑committee of the Joint Standing Committee for Foreign Affairs, Defence and Trade (JSCFADT).

There are many policy and administrative issues in Australia’s growing aid program, including how effective it can be, in what ways, in fragile and conflict‑affected countries. A JSCFADT sub‑committee could improve on the attention given to the aid program in Senate Estimates, which tends to be dominated by the most topical issues. It could do justice to the forthcoming work of the Independent Evaluation Committee, and more broadly to AusAID’s extensive reporting on its programs. It could also have a salutary influence on other agencies involved in delivering Australia’s aid, directly or through the DESC – asking whether their contributions are sufficiently selective, well coordinated and guided by internal and external evaluations.

John Eyers was Chief Adviser (International) in the Australian Treasury from 2004 to 2006, and was seconded to the PNG Treasury from 2006 to 2008 as part of the Enhanced Cooperation Program.