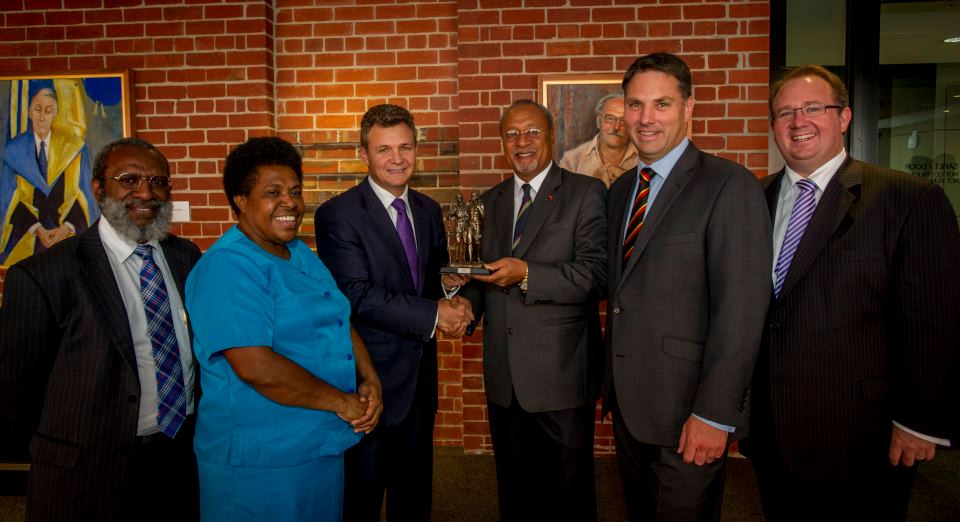 Featuring 75 speakers, half from PNG, there were far more talks than I could possibly attend. With concurrent sessions on topics such as governance, media, education, the public sector and the community, choosing what to attend– and what to miss – was not easy. This blog highlights some of the key themes that emerged from the sessions I attended.

This year’s symposium witnessed a changing of the guard, with Mark Thistlethwaite replacing Richard Marles as Australia’s Parliamentary Secretary for Pacific Islands Affairs. Mr Marles was replaced after he backed Hon Kevin Rudd MP in Mr Rudd’s puzzling non-challenge challenge of the Prime Minister; proving that strange political maneuvers are a part of politics on both sides of the Torres Strait. Mr Marles has been a strong supporter of the symposium since it began in 2011, and many attendees lauded the passion he displayed for his portfolio. In his welcome speech, Mr Thistlethwaite acknowledged Mr Marle’s contribution to the region and called for a continued strengthening of Australia and PNG’s relationship. He identified climate change, distributing the benefits of natural resources, gender equity, health and poor infrastructure as key challenges facing PNG.

In the first plenary session, Pacific Adventist University’s Vice Chancellor, Professor Ben Thomas challenged the negative stereotypes associated with leadership in PNG. While outsiders often frame the country’s development problems in terms of poor leadership, Professor Thomas argued that Westerners had as much to learn as Papua New Guinean leaders. For example, while Westerners often ship their elderly off to nursing homes, Papua New Guineans’ are committed to looking after their elders. The take away message from this presentation: outsiders should look for the strengths inherent in Papua New Guinean leadership and seek to build on these, rather than dwell on perceived failures.

I must admit I was rather energised by Professor Thomas’ passionate plea, and found myself listening to the following presentations with an optimistic ear, and there was a lot to be optimistic about. For example, Ms Marianne Witzig and Dr Ian Tiley presented the against-the-odds achievements of New Ireland province’s Free and Subsidised education program – 100% subsidy for years prep to 8 and 75% for years 9 to 12. In 2008, Ms Witzig, with a small team of women that she trained, started to implement the policy across the province. As a result of improved management processes and a detailed database, transparency improved and funding leakage was curtailed. When asked what lessons the New Ireland experience could have for the National Government’s 2012 free education policy, Ms Witzig replied that strong political will (Sir Julius Chan, governor of New Ireland, was an active supporter of the project), staff training, the development of an accurate database management system and, most importantly, honesty are all crucial.

PNG still faces many challenges and a host of presentations brought home the difficulties for the state and its citizens. Many presentations argued that the poor fit between customary and state governance systems was a fundamental challenge for the country. In his keynote speech, the Director of Taskforce Sweep (PNG’s successful anti-corruption taskforce), Mr Sam Koim, argued that public officials are still treated like customary ‘Big Men’. They are expected to contribute to increasingly expensive customary obligations, regardless of their means; to retain their office, even if the ballot box says otherwise; and are generally not criticised in public, despite wrong doing. This puts them at odds with the rules and laws of the state. For Mr Koim this not only leads to illegal activity, it also means the line between Melanesian appreciation and bribery is blurred. In turn, Mr Koim argued that fighting corruption in PNG is partly about ensuring that state laws reflect communal norms.

Associate Professor Deidre O’Neill and Ms Valarie Sands highlighted the fallout from poor leadership. They reviewed sworn evidence from the Commission of Inquiry into the Special Agricultural and Business Leases (SABL) – a ‘land grab’ that has resulted in 5 million hectares of land being transferred to business interests (often foreign). Associate Professor O’Neill and Ms Sands said the transcripts found gross mismanagement, poor transparency, serious breaches of regulation and little accountability in the public sector. They argued that, in the case of the SABL enquiry, public sector leadership did not support good governance and that this must change. The two presenters were particularly concerned that the Big Man system has become culturally entrenched in the public sector and may prove difficult to dislodge.

Some presentations implied that PNG’s population was effectively lacking national unity, but Professor Virginia Tilley from the University of the South Pacific cautioned participants about the complexities of nation-building. Professor Tilley argued that while building a nation is essential to state stability and effective governance, it builds from both tangible and intangible aspects. Tangibles include national transport and communication networks that bring people closer together, and integrated markets to increase interdependency and cultivate collective desires for a national rule of law. Intangibles, such as nationalist ideologies, interplay with these conditions by helping people to conceptualise interdependence as an imagined national community with shared interests and values. Professor Tilley warned that, as evidenced by fascism in Europe and ethnic clashes in Fiji, promoting nationalism is not without its risks. Her presentation was a reminder that nation-building in PNG must indeed be sought but also approached holistically. Fragmented efforts will fail to take hold, and getting it wrong can have detrimental outcomes.

The symposium featured a new generation of Papua New Guinean leaders, who articulately expressed their views on the country. Despite the recent horrific news stories about the treatment of women in the country, Masters student Mr Emmanuel Pok argued that by working closely with women, a new generation of Papua New Guineans have become more accepting of female leaders. There was some disagreement as to how to improve women’s participation in politics. While one of the country’s newest female MPs, Delilah Gore, argued against reserved seats for women in parliament, Blogger Martyn Namorong was adamant that reserved seats would ensure greater female participation in politics.

Some presentations showcased approaches that aim to support leaders into the future. Mr John Mao Kali, Secretary for the Department of Personnel Management PNG, laid out the public sector’s new Leadership Capabilities Framework. The framework draws on consultations with leaders in the public sector, who identified a core set of values reflecting Papua New Guinean ethics. It is hoped that the framework – which was to be put to parliament for approval in April – will help public servants better understand principles of good leadership. Civil society organisations also showcased their efforts. Mr Peter Aitsi explained how Leadership PNG trains and supports future leaders. And in a presentation I could not attend, Serena Sasingian outlined the important work that the youth organisation, The Voice PNG, has been doing to develop young leaders.

I am sure that many at the conference would agree (I am confident Professor Thomas would) that – despite some tremendous challenges – as these presentations show, there is still much to be hopeful about in PNG.

A detailed program of the presentations and the presenters is available here. The symposium’s blog includes links to interviews with Richard Marles and Dr Puka Temu.