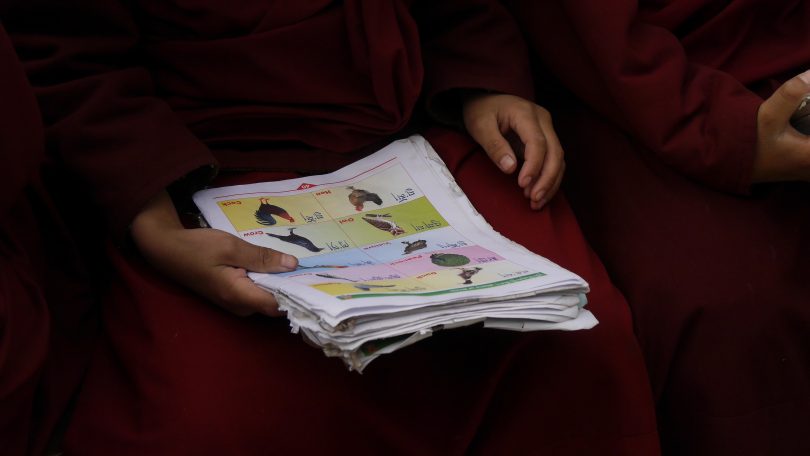 A student reviews his textbook at a Tibetan-medium school in Kathmandu, Nepal. (Credit: Naomi Fillmore)

The United Nations General Assembly declared 2019 the International Year of Indigenous Languages. The declaration aims to raise awareness of the crucial role languages play in people’s daily lives, including in early learning, as well as promoting and protecting indigenous languages and improving the lives of those who speak them. Access to education ‘in and about indigenous languages’ is a major objective of the international year.

Despite the now-overwhelming consensus in the literature that learning occurs best in the language a child speaks most fluently, many indigenous groups globally are still fighting for their right to linguistically-inclusive education to be upheld (including recently renewed calls in Australia).

In Nepal, Adivasi Janajati is a broad term for ‘indigenous nationalities’, and covers a diverse range of caste, ethnic and language groups in Nepal. The most recent census reported a total of 126 ethnic groups and 123 languages, but this number likely underestimates the true scale of the country’s multilingualism. With less than half of the population speaking the national language of Nepali as their mother tongue, and with literacy rates among the lowest worldwide, the issue of language in education is a pressing one for Nepal’s Adivasi Janajati and other linguistic minorities.

The Maoist Insurgency of 1996-2000 capitalised on the dissatisfaction with monocratic rule and policies of linguistic assimilation, suppression, and neglect that characterised the 19th and 20th centuries, garnering the support of many Indigenous and minority groups. The democratic government established in the wake of the Insurgency period promised to better represent the nation’s cultural and linguistic diversity. Though not without its issues, the new Constitution ratified in 2015 – for the most part – comes good on this promise. Among several new provisions for cultural, religious, and linguistic rights, the 2015 Constitution mandates that all children have the right to receive basic education in their first language.

Implementing the constitutional commitment in over 100 languages is the next hurdle for country. While any education reform is a difficult undertaking, implementing mother tongue education, with the added complexities and sensitivities of language and culture, is undoubtedly a ‘wicked hard’ development problem. To solve these types of problems, we need to start from a solid understanding of local attitudes, beliefs, resources, and capacities.

With this in mind, and against the backdrop of the International Year of Indigenous Languages, a recent study in Nepal offers an insight into the perceptions and practices of parents, teachers and students in six primary schools in remote Nepal. Implemented by the Language Commission of Nepal (the national government body set up to advise the President on constitutional provisions related to language, including mother tongue education), and with financial and technical support from VSO International, the study takes a magnifying glass to selected schools in the local municipalities of Temal and Phidim.

Findings show that, overwhelmingly, parents and teachers support the new constitutional provision, with 90 per cent of parents and 98 per cent of teachers agreeing that children have a right to education in their mother tongue. Clearly, the government’s decision to include mother tongue education in the 2015 Constitution reflects the desires and beliefs of local stakeholders.

The discrepancy in parent preferences between locations highlights the need for localised approaches to advocating for and implementing mother tongue education. Panchthar district, of which Phidim is a part, is the birthplace of a number of notable politicians, poets and authors, and the current President of Nepal is from the neighbouring district of Bhojpur. With such strong role models available, parents in Phidim may be less concerned that their children need to know Nepali or English to be successful outside of their community, while parents in Temal, located within a day’s drive from Kathmandu, may feel the pressure to assimilate with the national language more acutely given their proximity to the capital.

Turning to teachers, the study found that most were positive about the potential role of the mother tongue in education (95 per cent agreed that children should learn in their mother tongue first). This shows that any implementation of the policy at the teacher-level need not focus on advocacy activities aimed to convince teachers of the value of utilising the mother tongue. However, although teachers understood the importance of the mother tongue for learning, 80 per cent felt that they didn’t have the resources and 44 per cent felt they did not have the ability to switch to a mother tongue-based program at this time. Teacher-level activities therefore may focus on developing teachers’ skills, capacities, and resources for mother tongue-based teaching. Being at the chalk-face of the education system, addressing teachers’ concerns about their own skills and the resources available to them will be vital to the success of Nepal’s mother tongue education policy.

Students in both locations were generally positive about their schooling experience, with all students confirming they enjoy coming to school and learning new things. When asked about language, 69 per cent of non-Nepali-speaking students in Temal and 79 per cent in Phidim agreed that their teacher encourages them to use their mother tongue.

Classroom observations provided an interesting insight into current teaching practices in early grades. Though the local languages of Limbu (in Phidim) and Tamang (in Temal) were used to varying degrees in both locations, Nepali was the most dominant language used in classrooms in both locations (used 72 per cent of the time by teachers in Temal and 56 per cent of the time in Phidim), followed by English. Similarly, teaching materials in the mother tongue were limited in Phidim, and non-existent in Temal.

Other studies in Nepal, such as the Early Grade Reading Assessment (EGRA) study and the government’s own National Assessment of Student Achievement (NASA), have highlighted language as an important factor in poor learning achievement. The present study looked at the relationship between mother tongue education and student engagement. Unsurprisingly, it found that use of the mother tongue (either by the teacher or the students, and either orally or visually) was predictive of greater student engagement.

Education policy implementation is a ‘wicked hard’, highly contextual, and non-generalisable issue. With this in mind, this study offers a glimpse into the local-level attitudes, practices, and capabilities of local teachers, parents, and children, in two remote Nepali communities. The road ahead may be long, but by understanding and respecting local perspectives, the government of Nepal stands a better chance of delivering a stronger, more inclusive education system for Nepal’s Adivasi Janajati and linguistically diverse children.

Naomi Fillmore is a language, education, and development specialist. She has served as a teacher, researcher, manager, and adviser to education and language initiatives across multiple countries and continents, including most recently in Nepal and Indonesia.