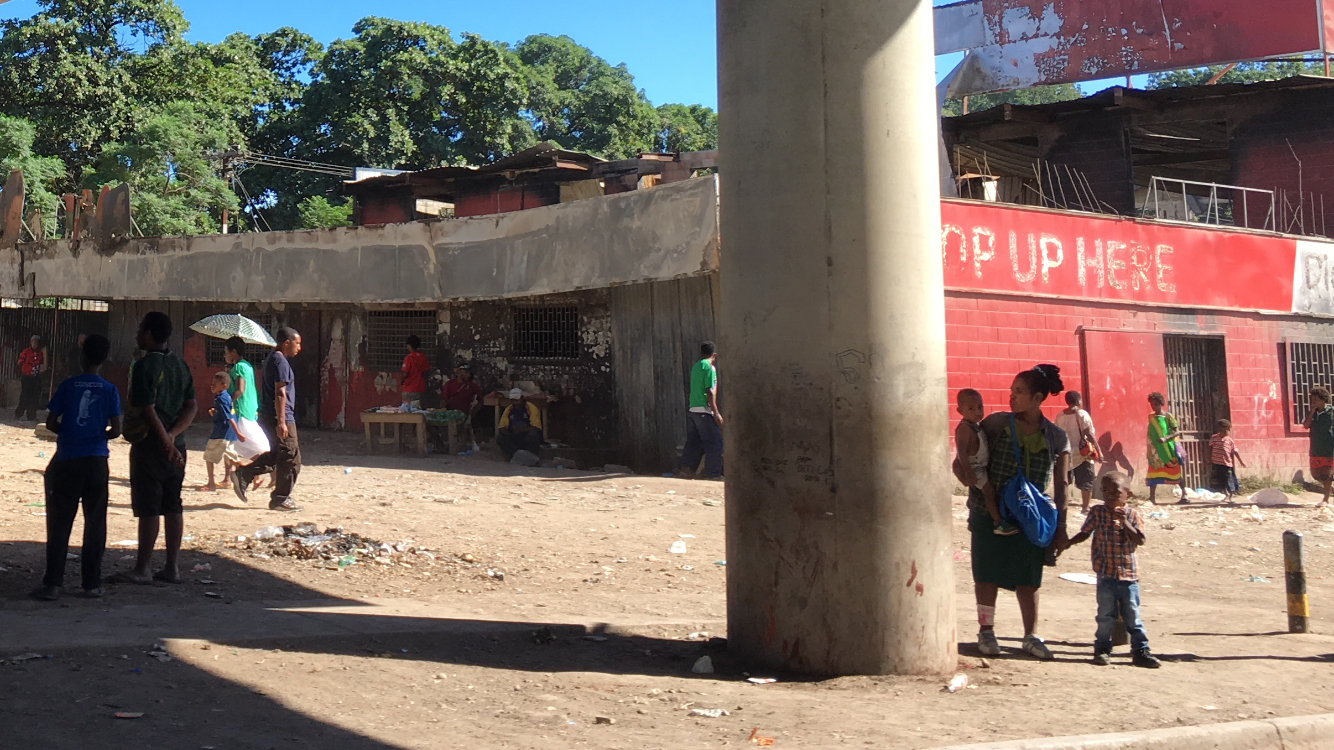 Wage employment is an important source of income for most urban people, both men and women. In 2013, I undertook a small household study among 32 households living in one settlement in Port Moresby, Papua New Guinea. Among these households, 82 people were engaged in some form of income earning activity. Of these, 46 people worked in wage employment — 34 men and 12 women (Figure 1). (I used the same data in an earlier post to understand the important role urban women play as small market stall vendors.) 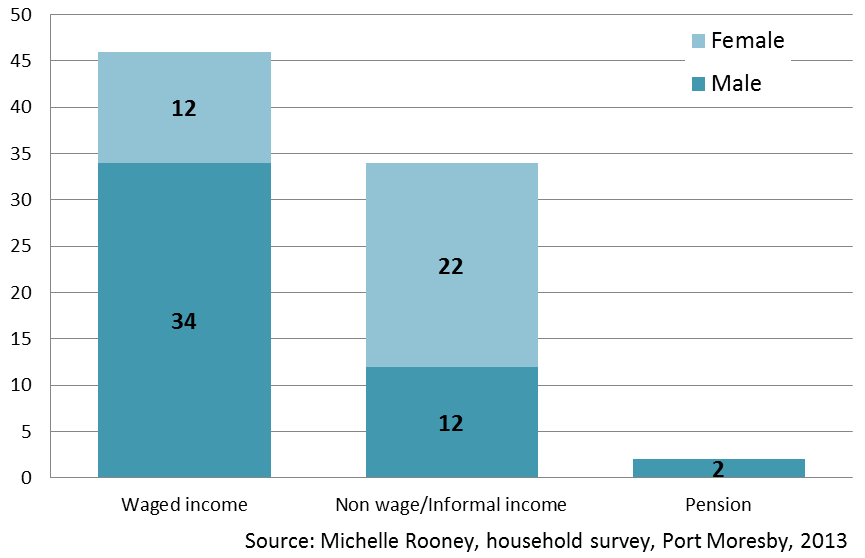 The private sector is by far the largest employer of both men and women, employing 42 people (Figure 2). These shares underestimate the importance of the public sector in PNG’s formal sector. This is either due to small sample size or may reflect the situation for low income households living in urban settlements, or the situation for this particular migrant group. 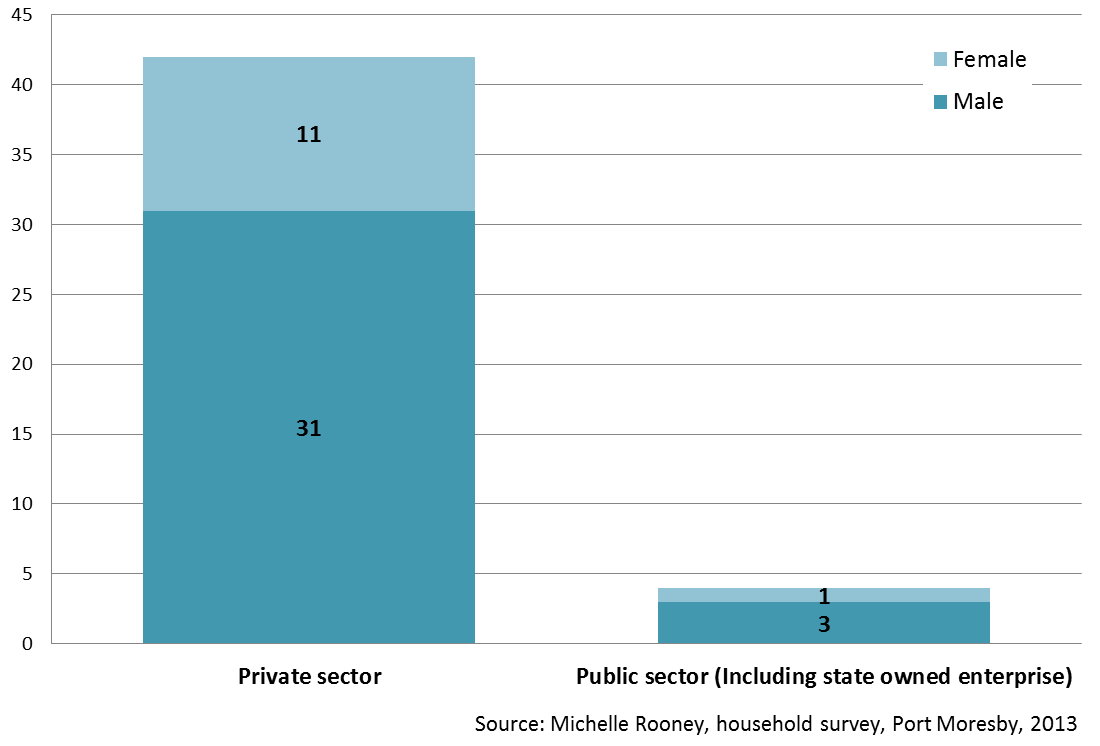 Of those 46 people who were earning a waged income, 12 were female (Figure 1). Among these women, apart from one who was employed as a teacher, the others were employed in the private sector. Three women worked in clerical positions as accounts clerks. Most had low skill jobs as general labourers doing work like cleaning or in the hospitality, retail or entertainment industry as hotel cleaners, kitchen hands, hotel maids, waitresses in the city’s growing number of restaurants, or as bar attendants and waitresses in the city’s nightclubs (Figure 3). The men were more likely to work as security guards, general labourers or tradespersons. 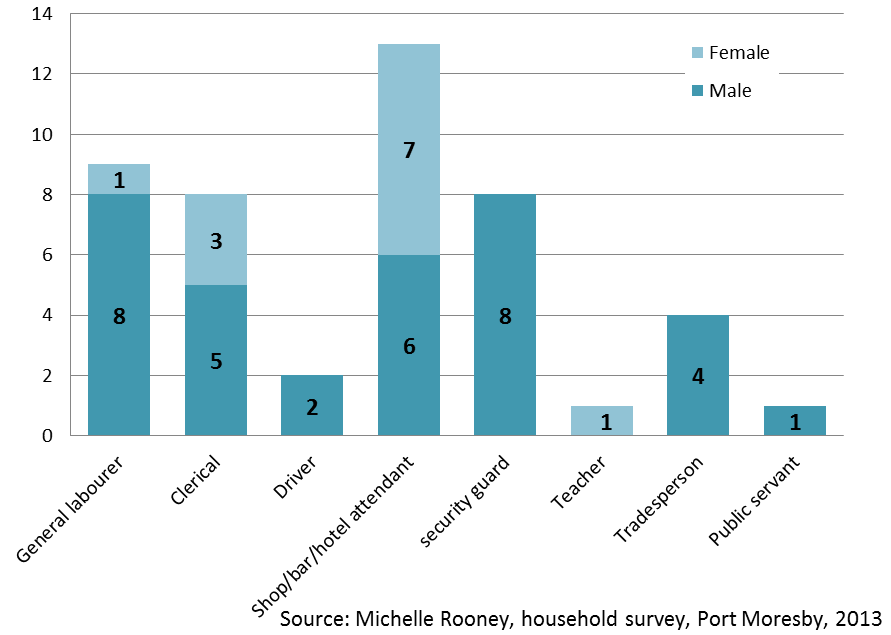 This very small snapshot suggests that the hospitality, tourism and entertainment sector offers an important employment pathway for women. This is consistent with recognition by the PNG government and its development partners of the potential of tourism and the hospitality sector to contribute to the country’s development (see this paper [pdf], this speech and these PNG Government policies). But my research also points to particular challenges women working in these industries face.

In particular, work in these sectors involves irregular and long working hours that very often extend late into the night. One woman, who was still breastfeeding her infant child, needed to return to her work as a waitress in one of the city’s restaurants. An international restaurant, it opened from lunch until late in the evening. She was required to commence work before the lunch period and remain at work up until the dinner shift. Because there is no functioning public transport system in Port Moresby, she then had to wait until the restaurant closed late at night, when her colleagues finished their shift of cleaning up, before they all could take the work bus home. The bus then had to travel all around the city dropping people off and as she was living on the outskirts of the city she was one of the last people dropped off, which would by this time be well after midnight. The low income meant she was not able to afford to pay anyone to babysit her child while her husband worked. It also compromised her child’s health. She had to give up work. She was one of the lucky women whose husband worked and was able to help her start a small informal market to support the family. Others are not so lucky.

Another woman, also with an infant child, faced a similar work arrangement as a bar attendant in one of the city’s popular nightclubs. In her case her mother was able to provide childcare for her young children. A key difference in this line of employment was that their employer offered extra cash incentives to his female bar attendants if they could sell more drinks to the many male patrons who frequented the clubs. The woman I interviewed expressed discomfort at this work culture, saying she and her colleagues often found themselves in compromising situations with male clients who often tried to solicit sexual favours in return for buying more drinks. In another example, a woman working as a hotel maid found that she was often approached by male guests for sexual favours in return for a cash payment. During work, many of these women’s challenges involve being able to negotiate their positions and setting acceptable boundaries between their employer’s and their employer’s clients’ expectations. These work-related challenges and difficulties of family responsibilities mean that many women eventually opt out of formal employment.

Transport is a major challenge. As mentioned above, Port Moresby does not have a public transport system at night, and taxis are expensive and late at night would be unsafe for a woman travelling alone. Most hotels, nightclubs and restaurants provide some form of transport to assist their staff to return home after work. But this means travelling all over the city late in the night to drop off co-workers before arriving at one’s home. For those living in settlements, this involved a walk in the night to their home which often required a relative to wait at the drop-off area to accompany them home. This raises the risk of a woman being raped.

Despite these challenges, there is a positive side to these stories. Women value the opportunity that earning an income offers. Indeed for many women the opportunity to engage in formal employment opens up new social connections and boosts self-esteem. Even if their incomes are low, their work is often part of a wider family strategy that balances waged and informal incomes. For example, one woman who had been unemployed for a very long time took the opportunity to attend some training being offered in her community by World Vision. This enabled her to apply for a position as a kitchen hand in one of the city’s international hotels. When I interviewed her she had completed her probation and was in the process of opening a bank account so her regular pay could be deposited. She was a middle-aged woman free from the burden of caring for young children, and her income enabled her to support her high school-aged children. Nevertheless, her low income still needed to be supplemented by her adult children. Her adult daughter, who was unemployed, also played an important role in supplementing the family waged income by operating a small informal market stall in the settlement while attending to household chores like fetching water from the communal tap.

The private sector, and in particular the hospitality, tourism and entertainment industry, provide important employment opportunities for women. To expand these opportunities, providing training for women in the industry is important. Employers need to do more to make it easier for women with small children to work. And improving safety has to remain a priority.