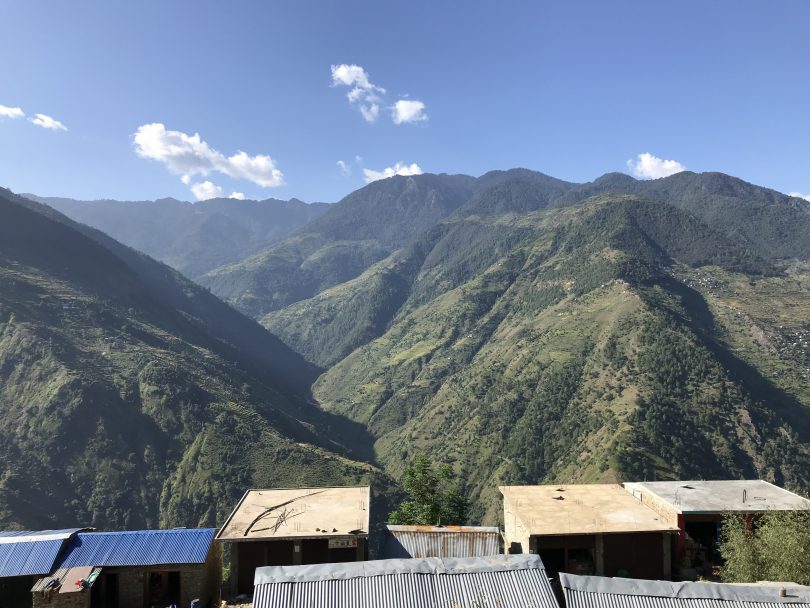 On a recent field trip in Kalikot in remote, rural Nepal, our team came across a poor local man who had been working as a cook, until he was approached by a well-meaning INGO who paid him to attend training on how to become a weaver. A few months later, the INGO paid him some more to train 32 others to become weavers and provide them all with free materials to get started with. Two years later he had woven and sold a total of two shawls. Chatting with him he reckoned few if any of his trainees were still in the weaving business as none of them had any idea where to get raw materials for weaving or where to sell their shawls.

This is symptomatic of some pretty poor development thinking (and spending) – if indeed any thinking was done at all. Too often in development there is too much effort put into giving things away to poor people – like free training, or chickens – that we think might just give them the necessary ‘leg up’ into the economy, but too little effort put into thinking about who might offer weaving training in the future when our project funds dry up or who will buy those chickens, or provide vet services to keep them healthy. Essentially, too little thought given to sustainability and a credible vision of how things might work in the future.

Yet we all want to help poor people get out – and stay out – of poverty, what many people call ‘graduation’. I’ve had the pleasure of rubbing shoulders with professionals promoting social protection (SP) approaches to graduation, and those promoting market systems development (MSD) approaches to a sustainable exit from poverty. But you could probably not get two more different schools of thought about how to eliminate poverty.

MSD practitioners are very concentrated on the services, support, and opportunities around poor people, and how these help or hinder an exit from poverty. They are adamant that any intervention by a development outsider must be temporary, and need no exit strategy as summarised here. That means working with, challenging and finding ways to nudge existing actors – often businesses – to try something new or different, not doing something yourself – like providing agricultural advice, or setting up a skills development program for young people – in the heroic or vain hope that somebody else will keep doing it when your funding runs out. Sustainability – that bugbear of development initiatives – is all about the continuation of a better service, better advice or skills training by people or businesses who will be there long after we – the outsiders – have left, and by those who will have incentives to keep providing those things and scale them, for profit potentially.

By contrast, SP experts are very concentrated on the poor themselves and the support and stimulus they need to get out – and stay out – of the poverty trap they’re in. What’s most important is that support for a sustained exit from the poverty trap. If a program can demonstrate how 10,000 poor people can be supported to exit poverty with regular cash transfers (stipends) or skills training, that is adequate success; and there are plenty of examples where that is the case like here and here. And if other people or organisations – usually national or local governments – are persuaded that this is a good idea and can be delivered on local budgets, that’s a bonus.

Both schools have great strengths. Both schools are usually exceptionally rigorous in terms of how they measure and attribute results. Many graduation programs have shown real and lasting improvements in the lives of very poor people; MSD programs can claim genuine, lasting benefits for the poor sometimes at great scale, demonstrating great value for money. But then again, neither school is perfect. MSD programs are sometimes seen to ‘drift upmarket’ meaning that as they scale they may benefit many more near-poor and non-poor households and less really poor ones; similarly, many donor-funded SP pilots have remained just that – with local entities unable to sustain or scale such programs.

The history of exchanges between these schools of thought has often not been pretty. Despite having very similar aims, I have found the discourse to be generally one of critical dismissal rather than constructive listening. And attempts to ‘bolt on’ a market systems element to a social protection program have—whilst well intentioned—tended to result in greater confusion rather than illumination.

Luckily, in Palladium we have had seasoned experts in both schools – who importantly happened to get along personally, and so have been able to have a more constructive professional exchange. Following a few days escape to a remote Tanzanian game park, the ‘Selous Conciliation’ gave birth to some blended thinking about ‘the best of both’ with implications for practitioners.

For the MSD posse this means starting with poverty and livelihoods analysis first, and then identifying where growth opportunities might lie for the really poor. It means explicitly targeting the market systems around the very poor – for example labouring opportunities or migration – even if the cost of analysis and intervention is a bit higher per beneficiary than normal. And – as many MSD programs now do – incorporating specific outcome measures around changed access and agency for the most marginalised and vulnerable, as well as incomes, jobs and outreach.

For SP teams it means close analysis of the systems into which any additional support – assets, skills training – are provided, and anticipating the effect on existing market actors – like training providers, chicken breeders – of providing these for free. It also demands a credible vision of who will realistically provide and pay for such support when a pilot program is completed. Paying closer attention to existing informal social support systems, and how these might be enhanced and made more resilient is also important.

Most importantly, combining the best of both necessitates program governance that ensures one, genuinely joined up team; one team conducting shared analysis of the situation of poor people and the possibilities to change that, before creative co-design of interventions that won’t erode any good things that are already in place. And joint reflections on the cases like the weavers above, and joint monitoring of what is working or not, and why. We’ve badged this ‘market smart social protection’ or MSSP.

Now with DFAT’s help we are working with BRAC in Nepal on a joint design for such a program. We’ve had many robust exchanges and a few ‘lightbulb moments’. Getting to a shared understanding of sustainability was key. So was a joint field trip where the team came across the weavers and similar examples. Agreement that we won’t be doing any more of that was an important breakthrough – that is, we won’t provide training directly, but instead will work with and through potential training providers, like existing weavers, or shawl buyers, or perhaps a local business association. And we won’t be providing cash transfers, unless there is a realistic prospect that local governments can continue such a scheme. Hopefully we’ll have some practical examples of how MSSP is working in practice in the near future. Watch this space.

Alwyn Chilver is Director of Economic Growth at Palladium International