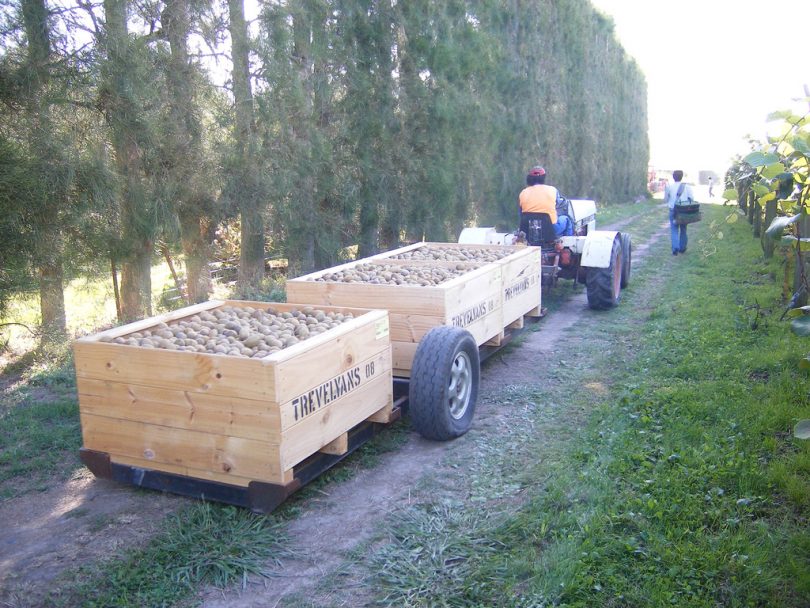 Kiwifruit being transported from a farm (Robert Engberg/Flickr/CC BY 2.0)

Migrant worker exploitation in New Zealand is a pressing issue. Media headlines over recent months highlighting the issue include: ‘He treated us like dogs’: people trafficker jailed; Filipino dairy farm workers abused, exploited; and Exploited Indian students turning to suicide, support group warns. These are not isolated cases of exploitation and some cases are illustrative of modern day slavery.

In December 2016, I released the findings from a two-year research project Worker exploitation in New Zealand: a troubling landscape in which the exploitation of migrant workers featured heavily. The research was undertaken on behalf of the Human Trafficking Research Coalition, comprising four non-governmental organisations: The préscha initiative, Stand against slavery, Hagar and ECPAT.

A number of those I interviewed were victims of wage theft – they were underpaid their legal entitlement or for some, not paid at all. Some were paid as little as $5 an hour. As a point of comparison, the New Zealand minimum wage is currently $15.75 per hour. Workers were required to work shifts of 12 to 18 hours for a very low wage and under exploitative conditions. Many employees did not have an employment contract, with many not aware that an employment contract is a legal requirement. One migrant routinely worked 90 hours a week but was only paid for 45 hours. For many migrants, their legal entitlements to holiday pay was denied. Some were threatened if they persisted in asking for holiday pay, “you will lose your job”.

Many endured degrading treatment, including being denied bathroom breaks and being verbally abused. One migrant was taken into an orchard and beaten by his labour contractor. As he recounted, he was threatened by his employer that if he didn’t keep quiet “nobody’s gonna find your dead body in New Zealand”. Another was assaulted by his employer and denied his basic rights to the point that he ran away and was found on the streets of Wellington in a distressed state.

Another form of exploitation that is occurring is job selling, also referred to as money-go-round schemes, wherein migrant workers, mostly those from Asia, pay money for a job that qualifies them for permanent residency. The amount can be $20,000 to $60,000 depending on the employer. The migrants are in effect paying their own wages. There are at least two scenarios by which the money-go-round schemes operate. In the first scenario, the worker pays cash to his employer who then uses this money to pay the employee through the formal wage system. In the second scenario, the employer pays a nominal amount – $5 an hour – with the employee handing cash to the employer for their remaining wage, which again is returned through the formal wage system.

In September 2016, New Zealand had its first human trafficking conviction. Faroz Ali was charged and convicted of 15 counts of trafficking in human beings under the Crimes Act 1961 as well as 42 other offenses under the Immigration Act 2009.​ Between 2013 and 2015, Fijian workers answered advertisements placed in the Fiji Sun offering the opportunity for work in Australia or New Zealand. The advertisements were placed by Ali’s de facto wife and her sister who each operated a travel agency in Fiji. Each worker paid between $FJ2,000 and $FJ3,500 to obtain employment, with one paying close to $FJ8,000 (including airfares). The sentencing judge described [pdf] the fees as “extortionate in nature”. The workers expected to earn seven to eight times per week more than what they could earn in Fiji, and hence working in New Zealand was an attractive proposition. They arrived in New Zealand on a one-month visitor visa with the promise of a work visa following their arrival. Instead their visitor visas were extended.

The exploitation came to light when one of the workers discussed her situation at church. In December 2016, Ali was sentenced to nine years and six months for each count of human trafficking; the sentences to be served concurrently. This is the first human trafficking conviction in New Zealand and has been described as just the ‘tip of the iceberg’.

In February 2017, the New Zealand government introduced new measures to protect migrant workers. Employers who are found to exploit migrant workers will be banned from hiring migrant workers for between six months and two years. These measures came into effect on 1 April 2017. Six months later, in September 2017, 70 employers were listed on the Ministry of Business, Innovation and Employment’s (MBIE) stand down list meaning they are ineligible to recruit migrant workers for up to two years. Those listed on the stand-down list included labour hire companies, building and related companies, and fast food operators. While the identification of 70 companies is a good start, it is only a small step towards addressing the wide-spread exploitation of migrant workers.

These new measures follow the Immigration Amendment Act (2015) which sets out a range of penalties including a maximum fine of $NZ100,000 and/or up to 7 years imprisonment for employers who exploit their workers. Further, exploitative employers who have been granted New Zealand residency within the past 10 years may face deportation.

The extent of the exploitation in New Zealand is unknown, as by its very nature, it is a hidden issue. What is clear though is that more needs to be done. Some forms of exploitation can be viewed as modern-day slavery and as such, New Zealand needs to consider a Modern Slavery Act, as Australia is doing. Further, we need to do more to protect those working for small operators who might not be captured under a Modern Slavery Act. Ultimately, we need to ensure that all workers have decent working conditions and that in particular, the vulnerabilities of migrant workers in the workforce are addressed.

Christina Stringer is an Associate Professor in International Business at the University of Auckland Business School.