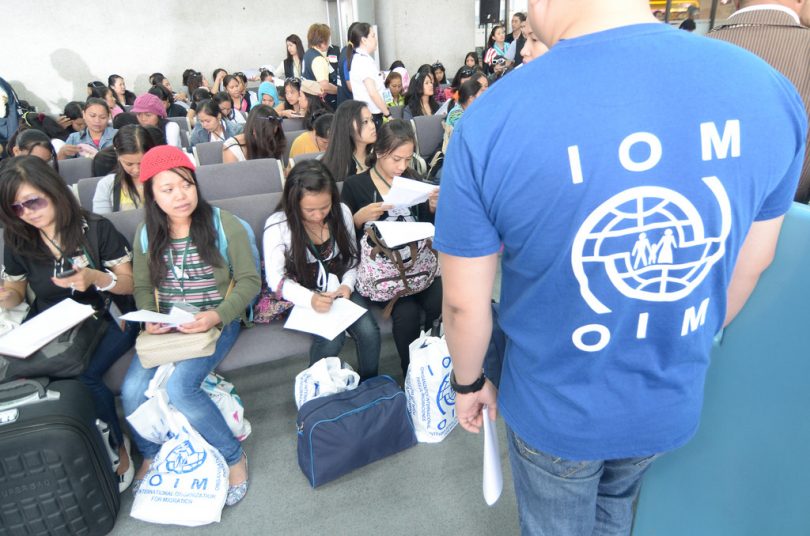 With migration never far from the news, these are challenging times for the International Organization for Migration (IOM). For over 60 years, the IOM has been the central player in inter-governmental organisation for migration. Last year, the IOM became a formal related agency of the United Nations and over the past two decades, many additional member countries have joined the IOM.

William Lacy Swing is the Director-General of the IOM and he recently sat down via video with Henry Sherrell for a broad conversation on migration and development. The video is embedded below and the first half of the conservation is transcribed in this post.

Director-General Swing: I think what we’ve witnessed is a growth in interest in the linkage in migration and development. I have frankly never understood the debate. It’s so obvious to me, that migrants are one of the principal agents of development. Every country that has a large migration flow sees an uptick in its GDP. We know that migrants bring new views, they bring talent, they bring additional languages, and additional skills so I’ve never really understood the debate and I’ve never understood how it’s possible that in the Millennium Development Goals in the year 2000, that there was no reference to that link between migration and development.

It’s been corrected, as you know, in the Sustainable Development Goals of last September. It’s mentioned at several points and there is an entire one of the 17 goals devoted to that. So I’ve watched this growth with a lot of satisfaction and optimism as to the future of the two and the stronger that link can become, the more we will be able to knock down the stereotypes about migrants coming to take down peoples jobs, or bringing in disease or criminality. So it’s a very solid link that we have and it’s growing.

In the Pacific of course, it is particularly important. [Australia] and a number of other countries have come up with some very good circular migration schemes. That allow migrants to come, for example, in the planting of the harvest period, to triple or quadruple their earnings and then return home to keep the social network and family together. That’s worked very well and y’all have been very creative in in doing that and I think the Pacific islands have grown in their own understanding of this and are doing a good job of it.

Henry: Recent history and the policy development of in the last decade has been quite substantial down here. And I think what you say is correct. The growing recognition of the link is important.

In reading your speeches, you often quip that, and I’ll get the words right here, “migration is not a problem to be solved or a crisis to be resolved but rather human reality to be managed”. This puts you in quite stark contrast to a number of prominent global leaders and others at the moment who are in part shaping the global migration agenda. What do you say to those who argue that we’re in the middle of a crisis or, as you touch on in that last answer, stealing jobs and the criminality side of things?

Director-General Swing: Before I do, I realise I should give you at least one example from the Pacific islands to make my point. On the increase in GDP. If you take the contrast between for example Samoa and Tonga on the one hand which have large parts of the population emigrating, and their remittances came up to 28% in the case of Samoa and even more, about 45%, in Tonga and you take the PNG and Solomon Islands who have very little in the way of migration and their remittances are not even one per cent. I think this shows you that remittances is an important part of that.

With regards to the other question, my statement reflects a very strongly held view within IOM that the positive nature of migration, you know as an Australian, I know as an American, that our countries were built on the backs of migrants. It was built with their brains and their talent and it continues to be the case, so it’s not difficult to come to that conclusion and by stating that I’m trying to say to people, don’t look at migration negatively, and look at it on the positive side because it has always been a historically positive contributor.

Now I mean I’d say to others that what we have now, we have a major challenge in trying to — and I’m very happy to have this conversation with you because that contributes — it’s very important to try to change the migration narrative which today is very poisonous and it needs to come back to a more positive narrative that recognises the contributions of migrants. So I think that therefore we have to knock down the stereotypes and basically the mythology that surrounds migration and now of course it’s worse than ever because those actually fleeing terror are now suspected of being terrorists themselves, which is a kind of cruel irony that we would like to counter with our own rhetoric.