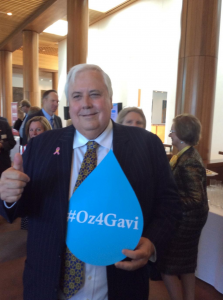 This week’s parliamentary morning tea in honour of the Gavi Vaccine Alliance was an impressive event. Dr Seth Berkley, Gavi’s CEO, made a compelling case for funding vaccinations in developing countries. Catherine King, Shadow Minister for Health, spoke enthusiastically in support. Speakers from both sides of Australia’s political divide talked of a shared commitment. Clive Palmer even smiled approvingly in the audience. And, most importantly, the Minister for Foreign Affairs, Julie Bishop, gave a powerful speech affirming Australia’s commitment to Gavi and announcing an extra $A50 million in funding: “The $50 million pledge for this year brings Australia’s commitment to Gavi to $250 million over five years.”

This is good news, but not quite as good as it seems.

As can be seen from this old press release from the office of the then Minister for Foreign Affairs, Kevin Rudd: Australia’s $A200 million pledge to Gavi’s first replenishment, to which the $A50 million is being added, was for the three-year period from 2011 to 2013 (Gavi budgets in calendar years). $A200 million over three years equals roughly $A67 million a year. The government has now re-interpreted Rudd’s pledge. As far as we can tell, they’ve taken a three-year pledge relating to the Australian financial years 2011-12 to 2013-14, and converted it into a four-year one by focusing on just the first and last years mentioned, namely 2011 and 2014.

So Bishop’s announcement of an additional $A50 million for 2014 is nice, but still represents a cut relative to the last three years. It is also a single-year commitment, which begs another question: why didn’t the Australian government make a longer-term commitment? It wasn’t obliged to do so, since Gavi’s second replenishment process is ongoing, leading toward a pledging conference in January 2015 in Germany. However, given that the pledging event is imminent and Berkley was in town, Australia could have done as the EU recently did, announcing its full commitment for the 2016-20 period in advance. After all, the timing shouldn’t matter given the government’s rock-solid commitment to maintaining aid at current levels. Perhaps it is simply that announcing big gifts to multilateral organisations on Australian soil lacks appeal—this has long been the case.

To be clear, it is good that the government has made the additional commitment for 2015. And it should be acknowledged that, while it is a cut, it is a cut relative to a particularly generous pledge from the previous government which placed Australia higher in Gavi’s donor ranking (currently ninth) than we would normally sit. Nevertheless, Gavi is a particularly effective organisation with, as we have just seen, support from across the political spectrum. It is to be hoped that Australia’s recent generosity to Gavi will be maintained next year when Australia makes its pledge to the second replenishment. That would look like at least $A67 million per year.