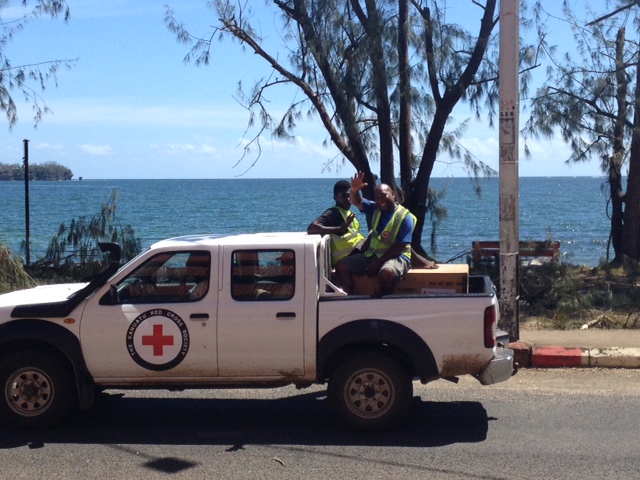 Usually the phrase ‘coming home’ signifies a return to all that is familiar and predictable. On Monday I came home to something that is far from familiar and to a situation characterised by frenzied activity, heightened awareness and rapid-fire exchanges of information and decision-making.

Nothing looks the same. Where once there was green, now there is brown. The wholesale destruction of vegetation has revealed buildings that were previously surrounded by bush. Landmarks that were present this time last week have gone. This does nothing to assist my already very flaky sense of topography. Nothing sounds the same. Usually when I write in my lagoon-side office, I hear birdsong, occasional barking from dogs and maybe the voices of people going past on canoes or kayaks. Now I work with the sound of chainsaws and bush knives in the background interspersed with the sound of military and civilian aircraft criss-crossing the skies.

Vanuatu has experienced cyclones before and will undoubtedly experience them again. Cyclone Pam is significant in terms of her impact both in breadth and depth. Initial assessments are still being conducted but preliminary information is that all of the occupied islands of the country have been affected, with the possible exception of Malakula. Reports from aerial assessments undertaken during the past couple of days are indicating extensive damage, especially in the southern part of the country, affecting buildings, airstrips and gardens. This last is of particular concern in terms of longer-term food security as over 70% of the population relies on subsistence farming. For now people will eat what can be salvaged from the storm. Some will have livestock that they can kill. I just read that in Middle Bush, Tanna, where all are safe (largely thanks to having endured the cyclone in daylight hours), people are making use of solar powered driers to convert manioc into flour before it rots. That will be a much valued resource in the weeks and months to come.

Those of you who have visited Vanuatu (and certainly if you have visited me) will know that drinking kava at the end of the working day is an important activity for a sizeable segment of the community. We get to sit outside, chat quietly, do some networking and drink the most foul tasting substance you would ever voluntarily put in your mouth – it is a mild soporific that produces effects such as numbed lips and general relaxation. I had expected that kava bars would be either non-operational or out of stock (most of the kava sold in Port Vila comes from other islands such as Pentecost, Ambrym or Ambae). Never have I been so pleased to be proved wrong. I spent Monday evening with some friends at one of my favourite kava bars. The two wooden huts where kava and food are sold are intact but the rest of the place is trashed. This kava bar was burned to the ground in October 2012 and only reopened late last year. The owners (who I have known for 18 years) told me – “last time we waited two years to start selling the kava again but this time we waited two days”. They were doing a roaring trade, lots of it being sold as ‘plastics’ (recycled drink bottles filled with kava for take-away). But there was enough for those of us who were there to enjoy a couple of shells in the peace and quiet.

I’ve been asked “How can Vanuatu recover?”, and the answer I have given is: we are recovering. This is a resilient country populated by resourceful people and we are working together to get things back on track. There are many challenges ahead: logistical, political, economic and social. There is need for much assistance and we know it is on its way. When it gets here, it will find us already working hard in our island home.