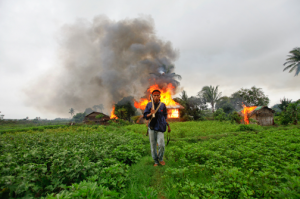 In part one of this post, I pointed to the general risks posed by support for the Busan principle of partner government “ownership” in a country, like Myanmar, where that principle might tend to support an amalgamation of development and political objectives. In this second part, I give some specific examples, and offer a better way forward.

A blatant illustration of the point above is provided by the restrictive narrative that has been developing among Myanmar’s donors around the idea of the nationwide ceasefire agreement (NCA), which was eventually signed on 31 March 2015 after more than a year of quarreling and negotiations between the ethnic armed groups and the government.

While President Thein Sein’s administration had clearly set its own preferred sequencing of the peace process, explicitly prioritizing the signing of the agreement, several ethnic groups insisted on the urgency of holding an inclusive political dialogue, and tended to portray the government’s own sequencing as a strategy to avoid reaching the next stages of the peace process.

The donor community has not paid much attention to what might be Myanmar’s military strategy in imposing its preferred sequencing on the peace process. Blinded by their commitment to work through governmental channels, donors have built their aid programs around this official account of how the process should unfold. “The fact that the delivery of aid remains dependent on this sequencing of the peace process defined by the government is highly problematic”, explains Naw Susanna Hla Hla Soe, an activist working to improve the lives of ethnic Karen women in Myanmar, and director of the Karen Women’s Action Group (KWAG). “Donors should focus on the actual needs of the communities, instead of complying with abstract requirements set by Nay Pyi Taw”, she added, referring to the Nay Pyi Taw Accord [pdf] signed in 2011.

Another example can be found in the dilemma of funding education in conflict-affected areas. In some ethnic states, armed ethnic groups have developed education systems of their own. For instance, the Karen National Union (KNU) and its Karen Education Department (KED) have provided services both inside Karen State and on the border with Thailand for more than 65 years, and one third of Karen State schools today are part of the KED network. Government-run schools thus co-exist with non-state-run schools in Karen State, along with “mixed schools” with both government and non-state teachers and curricula.

Against this backdrop, donor service provision is not neutral, and is highly political, since funding one system or the other has profound implications for the relationship that is built with either group. While in the past the international community used to fund more ethnic education systems (especially through the New Mon State Party (NMSP) and the KNU), the suspension of sanctions on economic and development cooperation in 2013 has paved the way for a closer engagement with central authorities. Funds in the sector of education are thus increasingly channeled directly to the government at the township level.

Crucially, this creates discontent amongst ethnic people, who consider the international community as contributing to the advancement of government interests and thereby reinforcing divisions amongst the parties to the peace process. “This way of proceeding has given rise to widespread corruption and manipulation, but also to mistrust, conflicts and misunderstanding in ethnic states”, explains Naw Susanna Hla Hla Soe. “In Karen State, through the Nippon Foundation, the Government of Japan provides emergency food, but most in the community refuse to accept this aid, because it is supplied through government channels”.

Overall, the specificities of the context in Myanmar appear to make it impervious to the application of the New Deal. Despite the current transition process, the country, which is made up of 135 official ethnic groups, seems not to be the ideal laboratory in which to test Busan’s prescription that donors work primarily through government structures. Support for the pursuit of a homogeneous Buddhist-Bamar consensus inevitably leads to tensions with ethnic minorities, and thus proves unable to restore stability, peace and prosperity in this profoundly divided society. Despite experience in other fragile environments, development programs continue to be deployed in ways that may foster division and disunity, instead of inclusive dialogue and cohesion. This is especially true in sectors where donor initiatives overlap with the political goals of the government, which fundamentally remains in the driving seat of the so-called reform process in Myanmar.

Although the case of Myanmar highlights some limitations of the Busan principles, this does not mean that they should be entirely discarded. While working primarily through a country-led process may lead to renewed tensions with stakeholders and impede national reconciliation, it is difficult to imagine how the donor community could effectively operate in the country without being granted some access and mandate by the government.

The Myanmar–Thailand border areas are split between state-controlled areas and non-state controlled areas that fall under the jurisdiction of ethnic leaders. Their access is sometimes restricted by the government, as is the case in many Kachin Independence Organisation (KIO)-controlled areas. As such, without working hand-in-hand with the government, donors are bound to be limited to highly confined development initiatives, which are likely to remain inconsequential for the future development of the country.

Furthermore, financially supporting a range of contending authorities and stakeholders with the objective of bringing about an inclusive process and dialogue is not free of challenges. This notably raises the question of dealing with overlapping jurisdictions, which has not been appropriately addressed by the donor community thus far.

A second problem that inhibits the evolution of donors’ strategies in conflict-affected and divided societies experiencing political transitions is concern about supporting an administration that is directly linked to one of the competing armed groups. This naturally raises questions of ethics and legitimacy. In the case of Myanmar, an increasing amount of development partners are engaging with armed groups, but a number of them justifiably remain reluctant to finance such groups.

If, on the whole, Myanmar embodies a context that challenges donor engagement in assisting the resolution of a longstanding and deeply entrenched conflict, there are nonetheless ways to work around these limitations.

First, there is an enhanced need for donors to make sure that their programs do not have the potential to intensify or re-inflame societal or political divisions. Development partners operating in fragile contexts under Busan standards should realize how nurturing their connections with a transitional government might profoundly affect the local situation and create further instability. Engagement with governing authorities should be balanced and, above all, focused on areas that do not have the potential to create new discontent among the various stakeholders.

Second, engaging with multiple stakeholders through inclusive and participatory planning and implementation is necessary. It should be noted that in transition countries, the parliament is often not a genuine political representation of the diversity of views that make up the nation, and consequently there is a need to conduct consultations beyond this official body. A genuine dialogue with all stakeholders in the country should be held before the deployment of development interventions in order to anticipate potential discontents or modifications of existing power relationships.

Moreover, in cases of profound mistrust towards authorities – as is often the case in transitional contexts – the donor community should figure out creative ways of engaging with the government that “do no harm” to the general transition and reconciliation process. A requirement should be that this engagement should not prevent the possibility of working with other bodies falling under different jurisdictions. On the whole, development partners should act as intermediating, if not reconciling actors, ensuring a genuine inclusivity of the transition process in fragile states.

Third, and consequently, so-called state-building endeavors should recall that the party in power at the national level should not be the sole actor focused on. This is especially crucial if peace is to be built in the longer-term. In this respect, ethnic groups or competing authorities, and more generally conflict-affected communities or CSOs, should be involved and truly taken into account in development programs, since sustainable national reconciliation cannot occur otherwise. Unfortunately, there are few widely shared lessons from donor experience of engaging with non-government stakeholders, and this knowledge gap contributes to a reluctance among donors and agencies to so engage. More research, evaluation and knowledge dissemination is needed in this area to inform the development community of better ways of appropriately tackling developmental issues in conflict-affected and divided societies.

More generally, the whole state–society relationship must be understood by development partners. They need to look at these dynamics more closely than they have done in the past if they want to observe positive impacts from their development policies in fragile states.

Mathilde Tréguier is working in Myanmar on peace issues and questions related to intercommunal violence. She graduated in 2014 from the London School of Economics and Political Science (LSE) with an MSc in International Relations. She also holds an MSc in Management from the EMLyon Business School.

Mathilde Tréguier is working in Myanmar on peace issues and questions related to intercommunal violence. She graduated in 2014 from the London School of Economics and Political Science (LSE) with an MSc in International Relations. She also holds an MSc in Management from the EMLyon Business School.