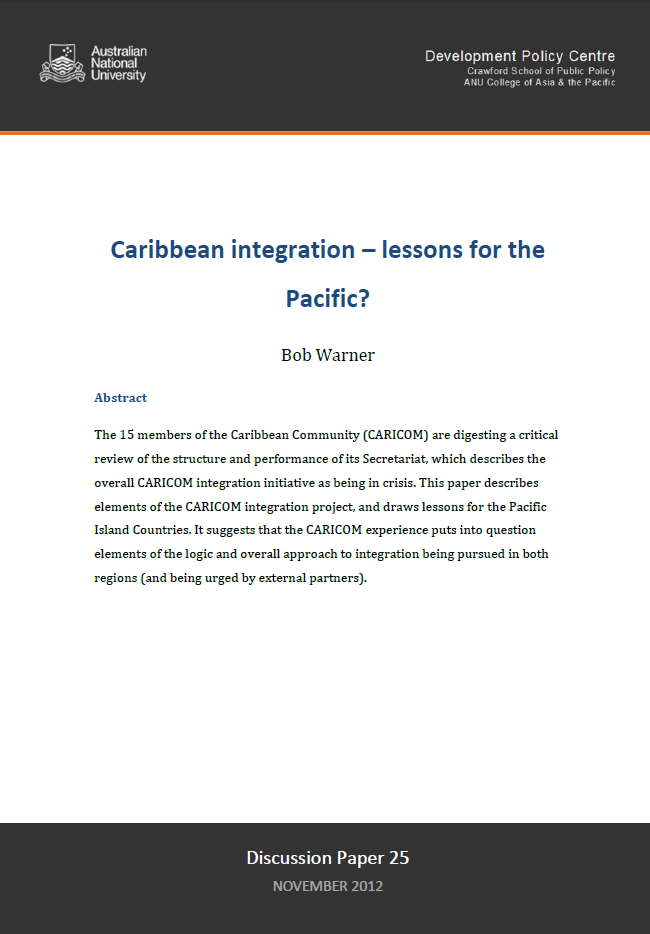 This post is based on Bob Warner’s recently published Development Policy Discussion Paper, Caribbean integration – lessons for the Pacific.

In a recent post, Matthew Dornan expressed concern that a recent damning review of the Pacific Islands Forum Secretariat may be ignored.  The Forum is not the only regional body contemplating critical reviews. A recent draft report by the Asian Development Bank Institute was quite critical of the Secretariat of the Association of South East Asian Nations (and one assumes there must be some soul searching going on in the various institutions of the European Union). But perhaps more relevant to the Pacific is the consideration that the fifteen members of the Caribbean Community (CARICOM) are giving to a recent report [pdf] that describes the Community as being in a crisis which puts the Community’s very existence into question.

Regional integration has rather longer history in the Caribbean than in the Pacific, with strong Pan-Caribbean sentiment (at least in the Anglophone Caribbean) shaping thinking well before independence. And the integration project in the Caribbean has sought much deeper economic integration, influenced to some degree by the European model – most members of CARICOM have committed in principle to the establishment of an economic union, under the framework of the Caribbean Single Market Economy.

The deep crisis now affecting the Community is not just about the functionality of its Secretariat (although that is a critical issue) but reflects deeper problems with the overall approach to integration. As members of the Pacific Islands Forum consider the report on its Secretariat, they might do well to look closer at what is happening in the Caribbean.

One factor contributing to the crisis in the Caribbean is that members of CARICOM have been preoccupied with dealing with the effects the GFC – and now the problems in Europe – on tourism and financial sectors. However, the report points to an intractable implementation deficit as the key issue, and links this to the excessive ambition of the CARICOM agenda in the light of:

There may be other contributors to CARICOM’s lack of authority. Some commentators have argued [pdf] that integration agreements with other partners (particularly the Economic Partnership Agreement with the European Union) have superceded the region’s initiatives as drivers of change and supplanted the regional structures that the Caribbean has endeavoured to put in place.

CARICOM differs in some important ways from the regional integration and coordination initiatives of the Pacific Island Countries, not least because of the level of development of many of its members and their proximity to large markets. But with many small island state members, CARICOM’s experience with regional integration and cooperation looks to hold useful lessons for the Pacific.

Both regions find themselves between the rock of geography and the hard place of politics in pursuing regional integration to address the constraints of small size on development.

The rock of geography means that with broadly similar endowments and an absence of connecting land borders, regional trade and factor market integration will not act as a major driver of growth.

And the hard place of politics means that it is extremely difficult to get agreement to cede sovereignty to regional institutions to achieve economies of scale and share the costs of statehood. (This said, the Caribbean includes one of the more successful examples of economic and institutional integration amongst small states, where the independent members of the Organisation of Eastern Caribbean States share, among other things, a common currency managed by the Eastern Caribbean Central Bank.)

For both regions deeper integration with the world economy has to be an essential element of development strategies, and solutions to the problems of the costs of statehood have to be found. But approaches to these challenges have to be based on realistic assessments of what, in a world of rocks and hard places, is most likely to work. Initiatives aimed at regional economic integration, or forging agreements with external trade partners have to be assessed against their likely contribution to the economic and development priorities of individual countries. And if transnational institutions offer ways of obtaining economies of scale and reducing costs, careful thought has to be given to the cultural, political and societal pre-conditions that have to be met to make the associated surrender of sovereignty workable.

Bob Warner is Director, Pacific Research Partnerships at the Crawford School of Public Policy, a position created as part of the establishment of the School’s new Asia and the Pacific Policy Studies journal.

This post is based on his recently published Development Policy Discussion Paper, Caribbean integration – lessons for the Pacific.